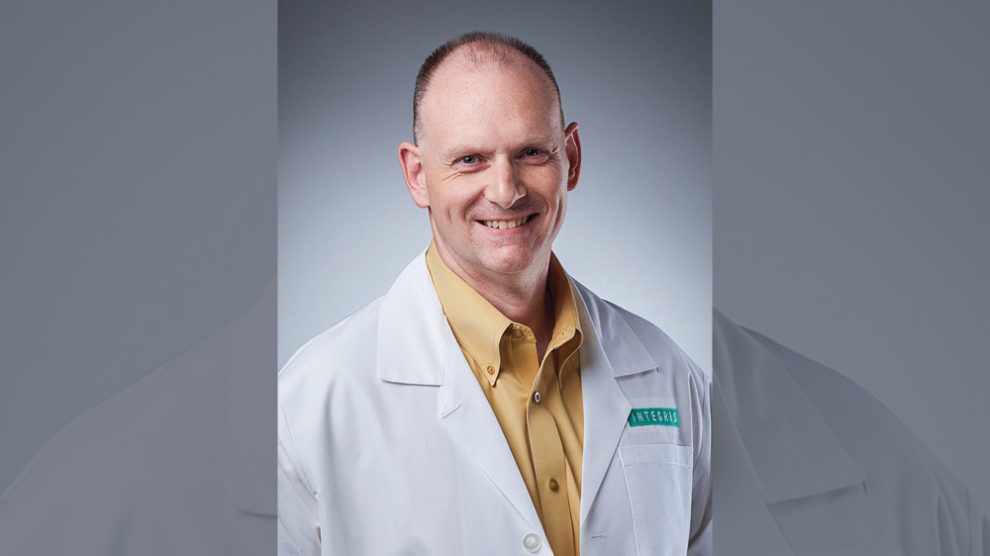 From the sunsets on Bison Hill to the plains of Kansas, from the Air Force to the operating rooms of Oklahoma City, Dr. Joshua Carey, ’95, has touched lives all along the way.

Meeting a surgeon can be a frightening experience, as it usually involves a surgical procedure, whether planned or unexpected. At those moments in life, love and compassion are needed most, when patients and families are at their most vulnerable point.

And it is with that love and compassion that Dr. Joshua Carey, ’95, serves the patients of Oklahoma daily, as a general surgeon at Integris Medical Group. Exercising skill and precision, coupled with Christian compassion and humility, Carey touches lives as he brings healing to countless patients.

“OBU had an excellent reputation in science education and a high acceptance rate into medical school,” he said. “I had been looking at joining the military reserves to pay for school and when I was offered the Bob and Bonnie Lynn Scholarship it was clearly God directing my path. I could not have afforded to attend higher education otherwise.”

With God providing the means, Carey worked diligently and took advantage of the opportunities afforded him to learn under experienced and expert professors.

“Dale Utt [associate professor of biology] demanded excellence and gave it in return. He was my advisor and gave me the hard feedback I needed even when I didn’t want it. I would never have made it into medical school without him,” Carey said.

He noted the influence of Dr. James Hurley, professor of biology and namesake for OBU’s Hurley College of Science and Mathematics, saying, “He pushed us to be renaissance individuals more than anyone I’ve ever encountered.”

In fact, one of his favorite memories involves Dr. Hurley.

“My senior year I was acting in a play where I was the ‘bad guy.’ Dr. Hurley took great care to introduce me as a ‘thespian’ before I led a tour of Wood Science building for prospective students and their parents, because I had long hair, a full beard and was covered in temporary tattoos that couldn’t be completely concealed. The way he said it, with the twinkle in his eye, and his unique half grin, let me know he was proud. I can still see it more than twenty years later.”

Carey credits his years on Bison Hill for developing his work ethic as well as his breadth and depth of knowledge. He also was impacted by the leadership opportunities and biblical foundation laid in his life. Perhaps most significantly, he met his wife, Jerilyn, ’95.

She earned a Bachelor of Musical Arts and recalls that she and Joshua met in the band. She also sees the impact OBU made on their lives every day in multiple ways.

“The professors at OBU challenged Josh not only to question, study and learn, but also to be the best man he could be in every area of his life,” she said. “They taught by example being good spouses, parents, teachers and Christians. Because of his well-rounded education at OBU, he can treat the whole patient. He learned to be an excellent listener and consider every facet of life in his decision-making.”

Following graduation, Carey joined the U.S. Air Force to serve and help pay for medical school. He attended the University of Kansas and then served a general surgery residency at Wright-Patterson Air Force Base in Ohio. After his residency ended, he was assigned to Tinker AFB in Midwest City. He left active duty in 2008 and joined a private practice. In 2014, he went to work at Integris.

“I’m a general surgeon. Probably the most difficult part of the job is when I know what someone needs to do to get better, but they are unwilling to do it,” he said. “Sometimes people make bad decisions and I can’t stop them. However, when someone comes back and their problem is ‘gone’ or ‘better,’ that’s an amazing feeling.”

When away from work, Carey enjoys spending time with his family, including Jerilyn and their two children, David and Emily, as well as time at Waterloo Road Baptist Church in Edmond, where he serves as a deacon. He also enjoys target shooting, reading and weight lifting.           ′