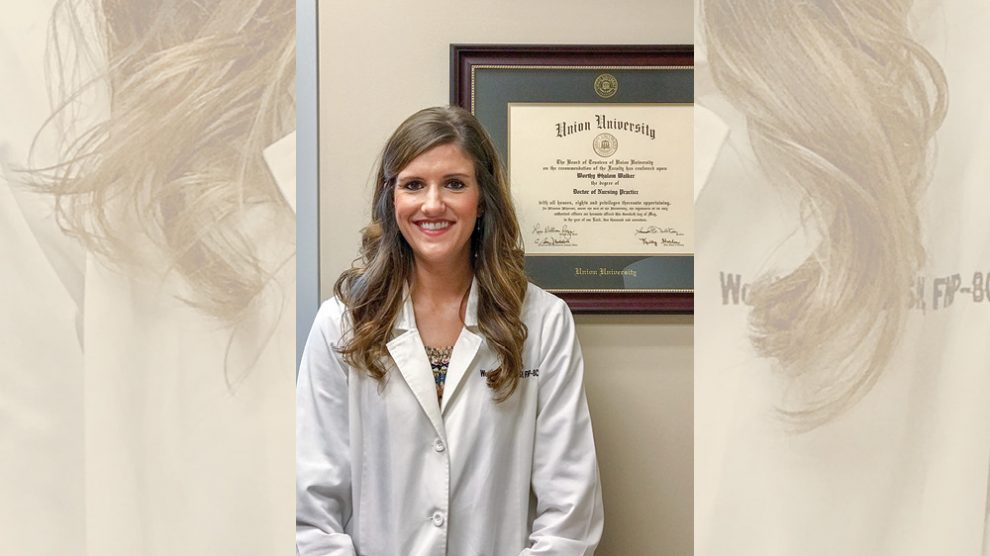 Even after moving away from her home on Bison Hill to Tennessee to earn her Doctor of Nursing Practice, Dr. Worthy Walker continues to heed her father’s advice to make a difference.

Currently a family nurse practitioner in hematology and oncology with West Tennessee Oncology Consultants at Kirkland Cancer Center in Jackson, Dr. Worthy Walker, ’10, remembers one thing in particular that stands out clearly from her childhood.

“Every day when my dad used to drop my sister [Amity, ’12] and me off at school, he always told us that he loved us, but he also told us to ‘make a difference.’”

Little did she know at such a young age that for her, making a difference would mean helping people through some of their most difficult and trying times.

For Walker, OBU had always felt like home. With both of her parents, Larry, ’73 and ’96, and Teri, working at OBU, she always thought she would attend the university, as she had grown up in the OBU community.

Walker initially attended OBU on a basketball scholarship, but after her freshman year decided to focus on her studies as a nursing major. She recalls visiting her parents’ offices in Thurmond Hall often during her junior and senior years as most of her nursing classes took place in that building.

“On good days and on bad days, it was always nice to pop in my parents’ offices to hear them say ‘good job’ or to console me and tell me that they still believed in me,” she said. “Now living eight hours away from them, I sometimes miss those days the most.”

She credits her experience on Bison Hill with preparing her well for her nursing career while providing her with the strong Christian foundation needed to positively impact her sphere of influence for Christ.

“I believe OBU prepared me to be a well-rounded nurse, further enabling me to make a difference in the lives of those I come in contact with each day,” Walker said. “I feel as though I have been greatly blessed with many opportunities in my short lifetime thus far. I believe all of these have been ordained by a sovereign God, and I would not be where I am today without Him. I aim to use the talents and the gifts He has given me in order to ‘make a difference’ in other people’s lives on a daily basis.”

Walker credits many OBU professors for impacting her life, yet recalls three specific faculty in particular.

“Dr. Carolyn Cole [retired Crouch-Mathis professor of literature] helped me to further develop my abilities to create papers that were coherent and meaningful. I believe her teaching helped me to succeed during my post-graduate work, as I never worried about the quality of the papers I turned in to my professors. She also had a genuine compassion for her students, especially in times of need.

“Dr. Ronda Hall [professor emerita of Spanish] helped me to complete a Spanish minor by working with me through several semesters of coursework that I completed outside of the classroom. During my junior and senior years, there were several classes I missed due to my nursing clinical rotations. She took extra time with me to give me one-on-one sessions in her office to help me attain this goal.

“Dr. Karen Cotter [former assistant professor of nursing] is one of the most influential nursing professors I have had the chance to study under. While she was tough in the classroom and in the clinical setting, I understood that when I received praise from her, that I had met the mark she had set for me as her student. I am thankful for her investment in my life, not only as an OBU nursing student, but as a young professional.”

Walker recognized early in her career that the training she received on Bison Hill was second to none preparing her for additional education and creating confidence in her clinical skills as she began work as a nurse.

“Moving forward, as I was working on both my master’s and doctoral degrees, I felt as though the core foundational work I had studied at OBU helped me to excel within the classroom,” Walker said. “Having a well-rounded education from a liberal arts university, I felt as though I was well prepared to handle different scenarios in the real world and was able to grow during times of adversity.

“I believe OBU prepared me to be a well-rounded
nurse, further enabling me to make a difference in the lives of those I come in contact with each day.”

“Not only did I gain the foundational skills I needed to succeed as a nurse, but I also received a Christ-centered education that incorporated faith into every aspect of our studies. We were taught to holistically care for the patient, not just their physical needs. Because of my personal relationship with Jesus Christ, I am able to share the love God has for His people, not only through my interactions with people on a daily basis, but in the hard conversations when patients ask me what happens after this life. I am thankful that faith was a large part of my education, as I believe it makes me better equipped to care for and serve the patients that walk through the doors of our clinic every day.”

After earning her Bachelor of Science in nursing from OBU, Walker continued her education at Union University in Jackson, Tennessee, where she earned a Master of Science in nursing, family nurse practitioner track, in 2013. She then completed a Doctor of Nursing Practice, also at Union, in May 2017. She has been a guest lecturer for the nurse practitioner program at Union, speaking on breast cancer prevention and screening, as well as hospice and palliative care.

As a nurse practitioner at The Kirkland Cancer Center, Walker works in the medical oncology department, where she helps develop chemotherapy treatment plans for her patients’ specific cancer diagnoses. She works with patients throughout their chemotherapy treatments, as well as during the follow-up phase once their treatments have concluded. She also works in the survivorship clinic, where they develop long-term follow-up plans for patients completing their cancer treatments and educate them on what to expect following a cancer diagnosis.

“Everybody always asks me, ‘How do you work with cancer patients every day? Is it not depressing?’ And my answer is that it is not depressing at all, because I get to work with some of the happiest, most grateful people you will ever meet,” she said. “There are hard days, and there are some sad and very emotional days, as we are dealing with people as they face some of the hardest days of their lives.”

Although the job is challenging, Walker finds the most rewarding part is developing relationships with the patients she is helping on their journey through the cancer continuum. Oftentimes she finds that her patients end up helping her as well.

“While I may be attending to their physical and emotional needs, they have changed my life as well. Until you have worked with a patient facing a cancer diagnosis, and until you stand beside them in that fight, you cannot comprehend the strength, tenacity and the will to live that exists within the human heart,” she said. “In the face of death and dying, these patients have shown me what a strong faith brings, as they have fully realized peace that surpasses all understanding. Getting to walk alongside many of these patients and their families throughout their journeys has helped to shape me into a more compassionate person and has strengthened my own walk with God.”

Walker is an active member of First Baptist Church in Bradford, Tennessee, where she sings in the choir, shares special music on occasion, has taught a children’s Sunday School class and has also helped to direct the children’s Christmas musical in previous years. She enjoys running, cooking, working in the garden and canning, using recipes handed down from her great-grandmother.       ′