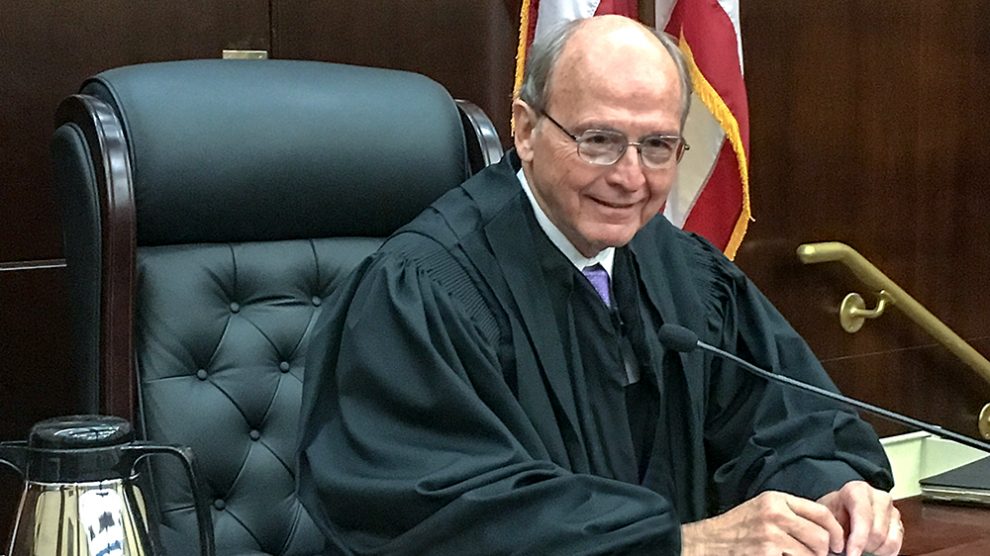 A Justice Balanced by Faith and Law

Judge David Russell, ’63, has taken classes at Harvard, Princeton, Yale and Stanford, but says he’s never had better professors than those at OBU.

“OBU was just ideal for me,” Russell said. “I had no political interests at all and my family was pretty much apolitical. My government teacher really got me excited about politics and government. As a result, I got very involved in politics both on campus and later when I got out of law school.”

Growing up with deep roots in McLoud where his grandfather owned a farm obtained through the Oklahoma land run, Russell’s choice of OBU seemed clear.

“My sister was a student at OBU and our whole family was very much Baptist,” he said. “My grandfather’s brother was president of the Southern Baptist Convention at one time. It was close to home and I graduated from high school very young. So the whole package made it easy to choose.”

Russell enjoyed the environment and the students but said the professors and faculty had the greatest impact on him and his life. Dr. Gregory Pritchard, philosophy; Dr. Allen Johnson, history; and Professor Corbitt Rushing, government, were among the most influential for Russell.

“The president of OBU at the time was James Ralph Scales and we became friends while I was there,” he said. “We maintained our friendship the rest of his life. He was also a real inspiration.”

Russell reflected fondly on his time at OBU where he lived in Baxter Hall and worked on campus waiting tables. “I had a great time and made lots of good friends who I’ve kept up with over the years.”

After completing his undergraduate degree in three years on Bison Hill, he attended the University of Oklahoma College of Law where he earned his juris doctorate at the age of 22.  He also met his wife, Dana, during his time at OU and married her in 1971.

He began his law career serving as an attorney in the Navy during the Vietnam War, later working for Oklahoma Attorney General G.T. Blankenship and the governor’s office.

“When Governor [Dewey] Bartlett was elected to the U.S. Senate, I went to Washington, D.C., with him as his attorney. He and President [Gerald] Ford appointed me as the United States Attorney in Oklahoma. That position is the federal prosecutor for the western district of Oklahoma. After a couple of years when Ford lost re-election, I was replaced by a new appointee and went into private law practice.”

Following President Ronald Reagan’s election, Russell was appointed U.S. Attorney where he served for six months before being appointed to the federal bench as a judge, a position he has held for 34 years.

“A person is fortunate when he has a job he can look forward to,” Russell said. “I’ve tried a lot of very interesting cases and have great colleagues.”

Among the high profile cases Russell has tried is the Oklahoma City bombing.

“One of the things I enjoy is trying cases,” he said. “It’s just such a good feeling when you see a jury take their job so seriously. A lot of people try to avoid being on a jury. I’ve had several cases that lasted as long as four to five weeks – a long time for people to be away from their families and jobs and other responsibilities. After the trial is over, I routinely invite jurors back into my office and ask them questions about the experience. They almost always say ‘I didn’t want to be here, but it was such a great experience to see how our system works.’”

Over the years, Russell has been awarded the Rogers State University Constitution Day Award, the Journal Record Award for Outstanding Judge, the Oklahoma Board of Trial Advocates Judge of the Year Award and the Oklahoma Bar Association Award for Judicial Excellence.

He and his wife have been members of Chapel Hill United Methodist Church for 30 years, and he has served on the Board of Directors of the Oklahoma Methodist Foundation for more than 20 years. Along with being active in their church, when they aren’t at work or spending time with their grandchildren, they enjoy traveling with friends.

“We’ve been to all seven continents,” he said. “We started off with southeast Asia, then traveled to Europe, and then to Africa on a safari. Then, we went to South America and caught a Russian icebreaker to Antarctica. Our last two trips were to the Melbourne Open tennis tournament in Australia.”

Judge David Russell is a man of intellect, a man of the law, a man of faith. Whether serving senators and presidents, presiding over one of the most significant cases in U.S. history, or setting foot on the frozen reaches of Antarctica, he has impacted many and has taken Bison Hill with him to the farthest reaches of the earth.