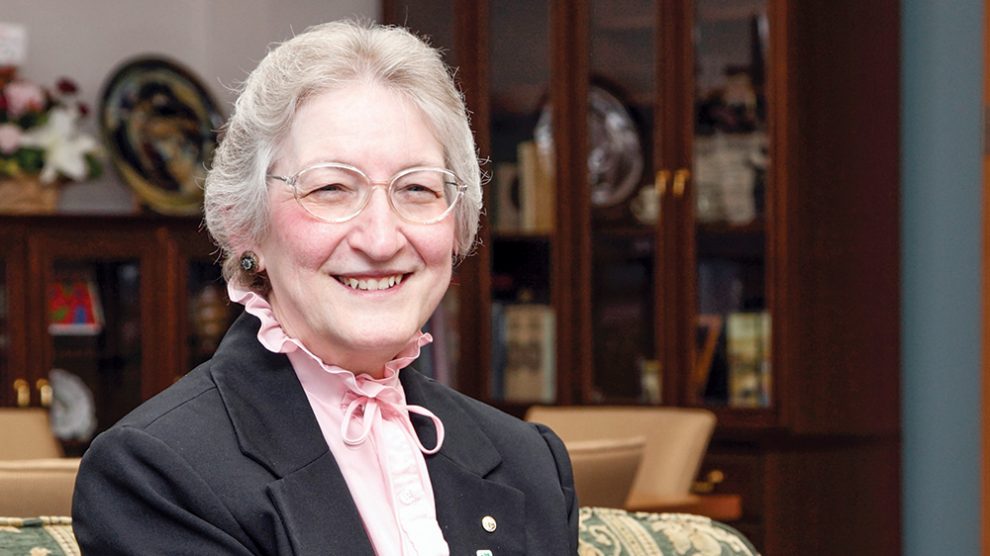 Compassionate and kind, Karen Schaffner, president of Seinan Gakuin University in Fukuoka, Japan, is a gifted educator whose commitment to serving the Lord is matched only by her ability to love others well.

Uniquely equipped with an uncanny knack for language learning, a desire to help others learn and a sincere interest in other cultures, Schaffner began to explore and pursue God’s call on her life at a very early age.

“I guess I’ve always wanted to be a teacher,” she said. “My mother’s parents were both teachers, and they always gave us old textbooks that were going to be thrown away. I can remember lining up my dolls, giving them those textbooks and playing school.

“My sixth grade teacher, Robert Cornell, had a big influence on me. My classmates and I were a varied group. Some were from Mexico. Some didn’t even speak English. But Mr. Cornell met the needs of everyone and challenged us. He helped every child find something they were good at. I remember thinking, ‘That’s what I want to do!’”

Schaffner’s love of learning and desire to teach intensified when she attended academy classes at OBU between her junior and senior year of high school.

“Professor Bill Mitchell was our instructor, and he made us think. We covered the whole gamut of content – western culture, history, literature, art, music – and looked at big issues. It was amazing, and I realized that OBU was a place where I could really grow.”

As an OBU undergraduate student, Schaffner discovered that she had a God given gift for language learning and found a mentor in her German professor, Dr. Rosemarie Lones.

“She helped me see what teaching really involves. German is a difficult language, but she made it fun by involving her students in creative ways.”

“Missionary work had always been there in the back of my mind,” she said. “My mother was my GA [Girls in Action] leader and I found it very interesting to learn how the missionaries lived and about what was important to people in other countries.”

When the time came for Schaffner to return to the United States, her OBU family helped her make the transition home and gave her a place to belong. Her mentor, Dr. Lones, offered her a position teaching beginning German and running a language lab. Professor Rhonda Hall, who had served as journeyman in Mexico, helped her readjust to daily life in the states.

“For a while, I thought, ‘Well, I don’t need to go overseas to be a missionary. They’re coming to me!’ But I knew in my heart that God had something else in mind,” she said.

After graduating from SWBTS in 1982, she accepted a position with the International Mission Board teaching German to Japanese students at Seinan Gakuin University in Fukuoka, Japan.

“The IMB asked me whether I was a student worker or an educator. I told them that the only thing I was qualified to teach was German, and they said that was the very subject they needed me to teach!”

By the time Schaffner taught her first class at Seinan, she had mastered the Japanese language, impressing colleagues and students alike with her aptitude for language learning and ability to understand the manifestations of culture embedded in a language. She soon mastered Japanese traditions as well, assimilating to her new home without losing her sense of purpose or calling.

“Going to OBU helped me to work out in my mind not only what I believed, but why,” she said. “We weren’t ever allowed to just say that something was so because that’s what we’d always heard or believed. Our professors made us explain ourselves. That helped tremendously when I began working with people who had a different set of values and standards. I was able to determine how much of who I was and what I believed in was cultural and how much was actually me.”

In the classroom, Schaffner did her best to instill a sense of purpose and hope in her students, earning her the loyalty of her students and the respect of her peers.

“At OBU, I watched professors teach students from a Christian standpoint and express their faith, but still give them room to have their own opinions. They gave their students things to talk about and think about and then challenged them to think beyond themselves and consider what they could accomplish in this life. That’s what I’ve tried to do with my students. I want them to understand that one person can change the world. I want them to know that we all have something to offer.”

Schaffner’s professional and administrative responsibilities increased over the years and varied in nature as she gained her supervisors’ trust. Some of her favorite memories at Seinan involve a student bell choir that she was asked to direct.

“We spent a lot of time together, practicing, traveling and staying up until the wee hours of the morning playing UNO,” she said with a laugh. “It made it much easier for them to open up and talk to me about their struggles, ideas, dreams and problems. Much of the music we played had Christian themes, too, so I had the opportunity to explain what it meant and talk about my faith. It was a blessing.”

In 2014, she was elected president of Seinan Gakuin University by its faculty and became the first woman to hold the position. Surprised and humbled by the vote of confidence from her peers, Schaffner accepted the position at the urging of her mother.

Although she misses the classroom, Schaffner strives daily to be a good steward with the opportunity to shine the light of Christ from this God given position of authority. Those who know and work with her have no doubt that she will succeed, as this humble servant embodies both a work ethic and drive forged on Bison Hill, along with a selfless love characteristic of a sincere and devoted follower of Christ.