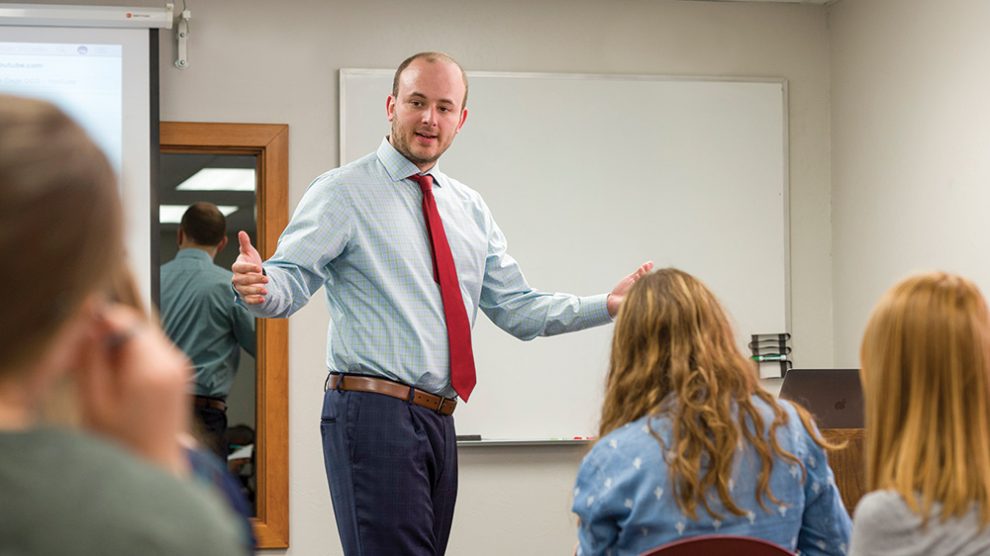 Dr. Jonathan Wilson personally invests in the success of his students, giving them the same individual attention and interest that originally drew him to transfer to OBU.

Wilson grew up in Orange, Texas, a small town deep in southeast Texas near the Gulf of Mexico. He knew from a young age that he wanted to be a therapist in some capacity. He chose to study psychology his freshman year in college at Baylor University in Waco. But before his sophomore year, Wilson transferred to OBU.

“I decided to transfer from Baylor to OBU for two reasons,” he said. “First, I was dating an OBU student named Grace Pratt (now Dr. Grace Wilson, ’08) who would become my wife the following summer. Second, the moment I decided to come to OBU was when I met an OBU professor, Dr. Bret Roark [professor of psychology], at an OBU theater production while visiting Grace on Bison Hill. Dr. Roark took more of an interest in me, as a psychology major from another school, than any of my professors at Baylor had. I wanted that kind of relationship with my professors and filled out my admissions application the next week.”

Wilson graduated in 2008 with a Bachelor of Arts in psychology with a minor in family relations. He then earned a Master of Science in human development and family science from Oklahoma State University in 2010. He joined the OBU faculty in the fall of 2013 and completed a Ph.D. in Medical Family Therapy from East Carolina University in 2014.

“It was an easy decision for me to apply. I stay here because I love college students and investing in their lives. This is my dream job,” Wilson said.

In his role as assistant professor of psychology/marriage and family therapy, Wilson teaches at both the undergraduate and graduate levels. He also provides clinical supervision to MFT interns, serves in the university counseling center, regularly publishes research, presents research at national and local conferences, and serves on the faculty council and curriculum committee.

One of his proudest achievements at OBU is co-founding Oklahoma’s first advanced clinical certificate program in medical family therapy, which focuses on bridging the gap between medical and behavioral healthcare.

He believes strongly that in addition to knowledge and experience, he must teach his students empathy, dedication and servitude.

“My hope is that my students will show empathy and compassion to anyone who comes to them, especially those who are marginalized or disadvantaged,” he said.

“I also want them to set and achieve high goals, dedicating themselves to use their God-given talents to succeed. Finally, I want my students to serve others as Jesus calls them to, being willing to give of themselves so that others may have a better quality of life.”

Wilson works tirelessly to see those goals realized, going above and beyond to make sure his students are equipped with everything they need to become successful therapists.

“I do my best to personally invest into each one of my students on an individual level both during their time at OBU and after they leave,” he said.

“It’s important to me that my students know that I care about them as individuals, and I sincerely pray that God uses them massively as they serve others with their career paths. Watching my students achieve their career goals brings me immense satisfaction.”

It was that devotion to his students’ success and his concern for doing everything possible to give them the best training and education available that led to Wilson receiving the Promising Teacher Award during OBU’s 2017 Spring Commencement. This award is presented to a junior faculty member who has taught at OBU less than six years, has demonstrated outstanding potential as a teacher and has exhibited the characteristics of one who may be a future recipient of the Distinguished Teaching Award.

Upon presenting the award to Wilson, Dr. David W. Whitlock, OBU president, referred to a nomination letter from an OBU alumnus.

“Of all of the outstanding professors that I came to know at OBU,” the alumnus wrote, “he [Wilson] stands apart as one who had both the opportunity and compassion to care about me personally and to help me through a difficult time in my professional development. To this day, he remains in contact with me and a number of people from my graduating cohort, providing both professional guidance and a friendship that we all value. I have been able to share significant events in my life with him and he has consistently offered support and encouragement to me.”

In addition to his duties in the classroom and as an MFT, Wilson stays extremely busy at home with a two-year-old son, Henry, and ten-month-old identical triplet boys, Alex, James and Luke.

The triplets have become celebrities of sorts around campus and even landed the Wilson family on a TV news report back in the spring.

When not in the classroom or changing diapers, Wilson enjoys running and several other pastimes.

“Until our triplets were born earlier this year, I ran nearly every day. In 2016, I ran four marathons, including the New York City marathon in November 2016, one of the highlights of my life so far. Grace and I are also avid fantasy football players, and enjoy watching NFL games on Sundays in between bottle-feedings.”