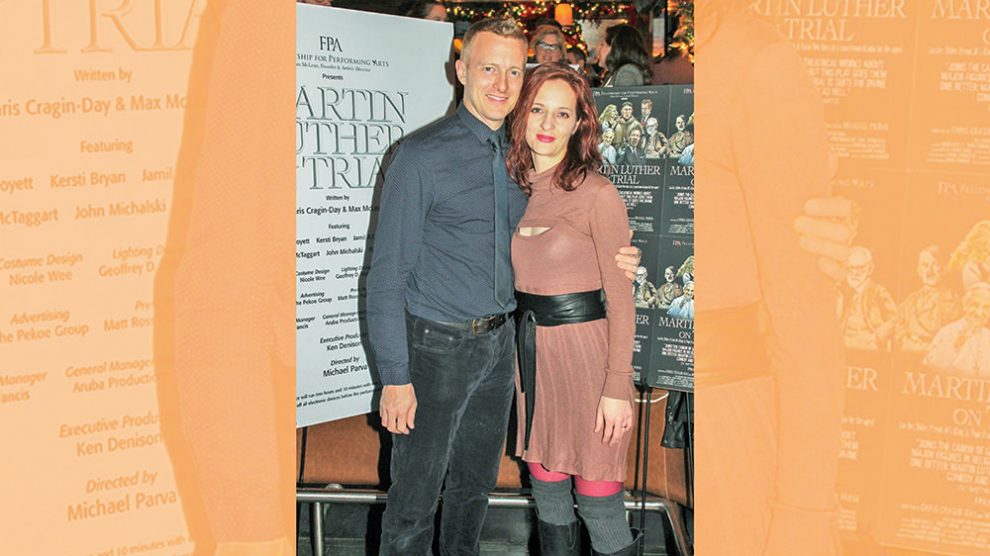 OBU Alumni Chris Cragin-Day, ’99, and Steve Day, ’98, met, fell in love and honed their craft on Bison Hill, laying the foundation for career success in New York City and across the nation.

When Chris Cragin came to Bison Hill as a student, she was already home. She was a fourth generation Bison, with green and gold running through her veins. Her sister, Kim, also attended OBU and her father, Dr. John Cragin, is professor of social entrepreneurship and international business. Her mother, Becky, worked for many years as the University’s comptroller.

For Steve Day, the path was a bit different. He wanted to attend a Christian college and liked what he saw from OBU’s theatre department.

As fate would have it, the two co-starred in the play, “As You Like It,” on campus, with Chris playing Rosalind and Steve portraying Orlando. They were both theater majors and soon began dating. The rest is history.

Fast forward 20 years after Steve’s graduation and 19 years after Chris’s, and they are both enjoying wild success in their career fields. Steve founded ideaMachine Studio and Whiteboard Animation Studio and the two production studios have won multiple Telly Awards and achieved national recognition. Whiteboard is a pioneer in videos where hands draw images on a whiteboard, while ideaMachine develops explainer videos. They have animated for Trader Joe’s, NBC Universal, Starbucks, the United Nations, Marvel Studios, ESPN and more. Their work has aired on “The Today Show” and premiered at Comic Con. Other notable projects include illustrating on NBC live for presidential debates, introducing the Globe Life Stadium for the Texas Rangers, creating animations to court top-talent for the Houston Rockets, and introducing the Trinity Wars for DC comics.

Chris also is enjoying tremendous success as a playwright, librettist and screenwriter. Her plays and musicals have been produced in New York City and around the country, including Oklahoma City and Tulsa. She was one of 12 playwrights selected for the prestigious Emerging Writers Group at The Public Theatre in 2008. She is the co-founder and artistic director of Firebone Theatre, which produces faith-based plays. She teaches writing and theater at The King’s College in Manhattan.

Their time on Bison Hill prepared them well for their careers and laid the foundation for the successes they have since enjoyed.

“We both had many opportunities to act, direct, stage manage and design shows at OBU, and those opportunities taught us to problem solve, collaborate and do scary things,” Chris said. “Steve began his marketing career by marketing the plays we did there. It’s also where he began building his skills in graphic design. Both marketing and graphic design are a big part of his business now.”

They recounted some specific professors who impacted them significantly and who helped build the necessary skills for success in their careers.

“Both Don Sandley and Marion Castleberry, the two successive theater department heads, invested greatly in our artistic growth, and we are thankful to them for that,” Chris said. “I was also greatly influenced by Dr. Carolyn Cole.”

After their time at OBU, they worked for Burning Coal Theater in North Carolina, both as actors and theater technicians. From there, they went to Baylor University where Castleberry was then running the graduate theater program and where Chris earned a Master of Fine Arts in Theater.

“While in grad school at Baylor, we did an internship with Carolyn Rossi Copeland, a Broadway producer in New York City,” Chris said. “At the end of that internship, she offered us both jobs, so we moved to New York City to work with her.”

Now, Steve owns and runs his animation studio in Brooklyn, while Chris works as a professional playwright and as an assistant professor of English and theater at The King’s College, where she has served on faculty since 2011.

Along with their successes, the duo also faces challenges in their work.

“Steve now does the work of a small-business owner and has all of the challenges that come along with any small business,” Chris said. “Many of his challenges have come from the speed at which his company has grown, so those are good challenges. My work as a playwright has also seen great success, but every project is different from the ones before and requires new skills, new tools, new approaches. I enjoy that aspect of the work, though. My work as a professor also includes the challenges of helping young artists navigate what it means to be a theater professional in New York.”

In the course of running both WhiteboardAnimation and ideaMachine studio, Steve has been a featured guest with the BBC, the History Channel, NPR’s Money Matters and ESPN. The studios have won 21 Telly awards, and he has directed animation campaigns for Gluten-free Cheerios, Mobil Oils’ 90th anniversary, the ESPN ESPY awards, and the Elmo Xbox game. He has won a Drama League fellowship and he is a Lincoln Center directing lab member. He has worked with artists such as Uzo Aduba (Emmy Winner as “Crazy Eyes” from “Orange is the New Black”), Joanna Gleason (Three-time Tony Award nominee.), Keir Dullea (Golden Globe winner for “2001: A Space Odyssey”), Tom Green and Geoff Johns (DC Comics Chief Creative Officer).

While Steve’s drawings and animations brought the company into existence, he began his career directing for the theater, where his productions won an NYJT award and nomination, a Drama League fellowship, and a membership with the Lincoln Center directing lab. He also directed and developed “Son of a Gun,” a National Music Theatre Conference winner.

Steve has found that the studio’s success is owed in part to its rigid hiring, accepting only the best talent. The studio receives 300 applicants per position, and they make it a practice to hire top-notch artists that have worked for Cartoon Network, Marvel Studios, Hornet Inc., Nickelodeon and more.

In their studio commercial, he emphasizes this idea. “The real secret to our success is the incredible talent found in New York City,” he said. “Our artists don’t live for profit, they live to make great art.”

He credits his time on Bison Hill with helping him build a successful company.

“My animation studio is built on collaboration,” he said. “The company is made up of so many talented artists and creators, together we are far more than the sum of their parts. I learned the value of collaboration, and how to empower creative people to be their best, at OBU. Those lessons are the heart of my business today.”

He hopes to reinvent the animation and explainer video business with the personal style he received from his training in the OBU Theatre program.

“Dr. Castleberry taught me how to understand stories and the way that audiences perceive those stories,” he said. “That knowledge is huge for companies.”

Chris’s success has been equally impressive, and her play, “Martin Luther on Trial,” commissioned by and developed with Max McLean, was presented in New York by Fellowship of the Performing Arts. It enjoyed an off-Broadway run in 2017, a national tour in 2017, and has another national tour coming up this summer.

Other recent New York productions of her work include “The Selfish Giant,” a musical adaptation of Oscar Wilde’s fairy tale co-written with Michael Castillejos; “Son of a Gun,” co-written with Don and Lori Chaffer; and “Emily,” produced by Firebone Theatre. “Son of a Gun” received much acclaim and was a finalist for the Richard Rogers Award. Her musical, “The Unusual Tale of Mary and Joseph’s Baby,” co-written with Don Chaffer, played in the 2016 NYC Fringe, had a Midwest tour by River and Rail Theater in 2017, and has another tour in the works for 2018.

Even as their careers have flourished and as they have achieved success beyond their wildest dreams, the two still think fondly and often of their time on Bison Hill. One of their favorite OBU memories is when their theater group held a weekly Bible study at a secret spot in Craig-Dorland Theater inside Shawnee Hall. They made many cherished memories praying together there with their good friends, forging their faith and developing into the artists they are today.

Steve offered some valuable advice to current and future students on Bison Hill.

“OBU is an environment where you truly can get back what you put in to your time as a student. Make the most of it, stay as involved as you can and build lasting relationships. I built lifelong relationships that I value as much as anything. Even now, from my office in New York, I stay in touch with friends from OBU.”

Along with their career success, the Days have been blessed with two children, their daughter Kansas and their foster son Noah.