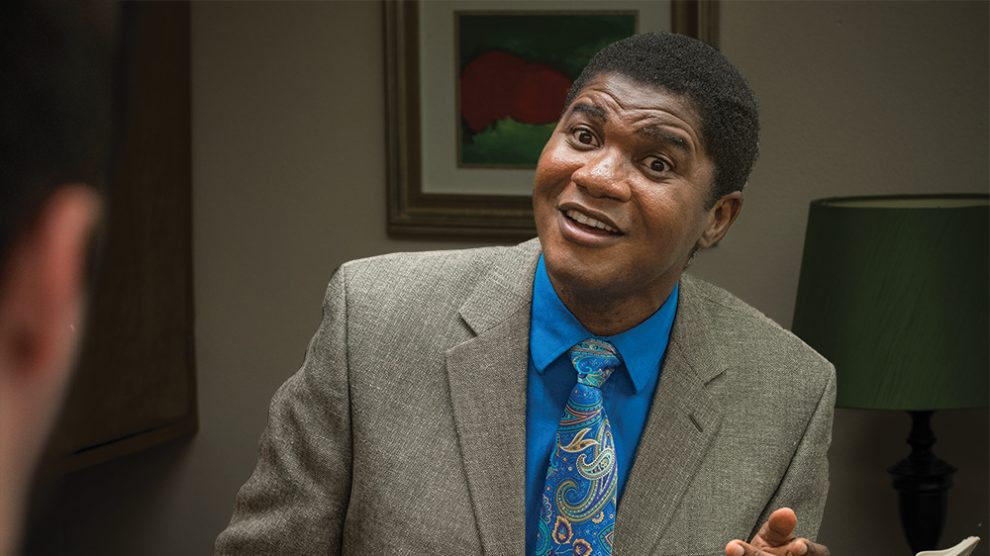 Joy. When one hears of Dr. Louima Lilite, joy comes to mind. A joy for music. A joy or life. A joy for the One who is the Creator and Lord over all. A joy for the very act of being alive.

The youngest of nine children, Lilite was born in Haiti to parents who were ministers, loved music and loved to sing. It was in the midst of this household where his love of music was born. Here his mother taught him many songs, hymns and choruses.

“I grew to love the Word because we took scripture and set it to music,” he said.

Although there was a lot of poverty where he grew up and his family didn’t own a piano, his parents provided piano lessons for his older siblings. By the time he was old enough, they didn’t have the money available for him to take lessons.

Despite not receiving formal musical training, Lilite was intrigued when he heard about the North Haiti Music Camp. He attended for the first time when he was 13.

“I heard people practicing,” he said. “I heard Für Elise being played and I thought, ‘Wow, I didn’t know real people could do that.’ I had never really seen other Haitian kids doing so well in classical music. Right then and there, I said, I just have to learn.”

The camp has volunteers from all over the world who come to teach music to the children of Haiti. He wanted to take piano lessons during the camp, but without any previous experience, he was trumped by other students who had at least basic piano knowledge. Instead, he took other classes and learned by observing. After the first week of camp, his older sister arranged for him to take lessons with a 19-year-old college student volunteer.

“She taught me for a week and that’s all I had. So, I went back home, but we didn’t have a piano. There was a local Bible school that had an old beat up upright piano with the paint peeling off and the keys weren’t functioning properly. It was in a deserted room full of rejected beds and old mattresses and stinky pillows.”

In the solitude of that place, Lilite began to learn to make beautiful music, juxtaposed against the backdrop of discarded items and stale air.

At age 17, he was accepted to Biola University’s Conservatory of Music in California. While his family hadn’t the money for piano lessons, God provided through music scholarships, church grants and scholarships for pastors’ children. He studied piano and voice performance, graduating with a degree in both concentrations.

To Teach is to Change the World

Lilite married his college sweetheart, Dephanie, and the two moved east for him to attend graduate school at Pennsylvania State University. He decided to focus on voice while his wife studied as a piano major.

It was at Penn State that his passion for teaching began to grow, studying voice performance and pedagogy. That passion was acknowledged when he earned an Excellence in Teaching Prize while studying at the Eastman School of Music.

During his time at Eastman, he learned from one of the most sought after vocal teachers at the prestigious school. There, he had the opportunity to engage in the professional world of singing, especially the world of opera. With a developing passion for teaching balanced with professional success vocally, he struggled with whether to pursue a performing career or teaching.

That struggle ultimately led him to OBU, but in a rather unique way.

“I felt led to take some classes as part of the Arts Leadership Institute at Eastman. In that program, they encouraged us to write our personal mission and vision statements for our career. When I started looking at OBU and started looking at the University’s mission statement, it was almost identical to mine. So, when I came to interview at OBU, I talked a lot about the mission statement and it showed the passion that God has placed in me for life transformation,” he said. “That has been the purpose of my teaching…it’s about life transformation.

“The teaching itself asks me to develop what I call epistemological humility, acknowledging that I don’t own the truth, God is the truth. I ask myself, ‘What is God doing to me today to contribute to life transformation in the lives of my students, colleagues, administration, faculty, staff, and every constituent?’”

A Passion for Life Transformation

Lilite received OBU’s Distinguished Teaching Award in May 2016. Having won the University’s Promising Teacher Award in 2010, this new recognition came as no surprise to his friends and colleagues. It did, however, to him.

“When I was at Eastman as a teaching assistant and they gave me the Excellence in Teaching Prize, I couldn’t believe it. When I was given the Promising Teacher award here, it was my second year here, and I wasn’t expecting that. I felt exactly the same way for this, because for the Distinguished Teaching Award, I always think of great teachers who have taught for decades. I see myself as this little kid, still trying to learn the ABC’s of teaching.”

Sadly, Lilite was absent for Spring Commencement when the announcement was made, as he was out of state grieving the loss of his mother with his family.

“Debbie Bosch [retired dean of the Hurley College of Science and Mathematics] called me to say that she was so sorry about my mom, and then she said, ‘Do you know what was said about you at OBU’s commencement?’ I thought, ‘Why would they say anything about me?’ She told me and I just couldn’t believe it,” he said.

“It was a huge mix of emotions. I was grieving, I was crying. I wished my parents could have been here, but they are in a much better place.”

Lilite carries this same humility and sweetness of spirit into the classroom with his pupils.

“I hope that perhaps I have had an impact on at least one soul. I hope that there was life transformation that occurred under my teaching because that is what it’s all about, that lives would be transformed by the influence of the Holy Spirit through me. I think this award could have easily gone to several others, but for whatever reason, God made it possible for me to be chosen only by His grace.”

He has a passion for music and the arts, and seeks to instill that in his students every day.

“The arts invite humans to ponder mystery, to seek truth, to gaze upon beauty, to engage all the senses in a way that is memorable, in a way that is so powerful and so pungent that you can then share that with others,” he said. “Those songs and pieces of sculpture and paintings and all of those piano sonatas, they speak of something that is much bigger. Music says something. You feel transported to a different place, and you’re no longer where you are. The arts do that for people.

“In life, we are all teachers, but really the real teacher is the Holy Spirit,” he said. “There is truth in the sciences that we teach or the art that we teach. Otherwise, it wouldn’t work. So, as I am teaching the student how to stand and how to breathe, I take the time to make them see how they have to rely on it the same way they have to rely on God to be their refuge and strength, an ever present help in trouble. So many times when students are having difficulties, it is really a spiritual issue. So many times when they unlock a technical mystery, it also unlocks a spiritual mystery.”

Just as he seeks to transform his students, Lilite acknowledges the powerful impact OBU has made on his life.

“Coming to OBU has given me an opportunity to sit under the Lord’s teaching especially in terms of biblical thinking, deepening my faith in Christ. The more God draws me to spend time in His word and to understand theology as a layman, the more layers have been added to my music teaching and music training. Just working with the text, I can point students to the particular worldview that is being stressed, portrayed or taught in those songs. You engage a diverse world by analyzing those texts, to see more clearly why a particular worldview-holder would write this song, or sing this song, or object to this song. It just makes the student much more engaged. So, then we see performances that are much more transformative that way. For me, that’s the mission of OBU. I don’t think it’s just in music. It’s something that happens even in the hard sciences.”

Lilite is indeed a man of many talents, excelling not only in the concert hall, but also in the kitchen.

“I love to cook. I love to cook anything. The family loves Thanksgiving with the turkey and the stuffing and the pies,” he said. “I love baking. When I was growing up, my mom taught all of us to cook and to take care of the house. It soon became clear to me that not everyone in my family liked the kitchen, but cooking has always been very therapeutic for me. After a long semester, I get in the kitchen and start cooking for my family and friends and people in need.”

While his love for cooking and serving others has grown and flourished in adulthood, it found its origin in a childhood act of sacrifice, born out of love and need.

“When I was nine, an older relative visited us and gave $25 to each of us children. Everybody used their money to buy toys or whatever they needed. I just went into the kitchen and for the first time God opened my eyes, and I looked in the pantry and thought, ‘Wow, we don’t have anything.’ So, I took my $25 and didn’t say anything to anybody. I asked my Mom if I could go outside, and she said yes. I was a little naughty, and I went to the nearest store. I bought enough food for the whole family with the money and came home and prepared it. Ever since then, I kept cooking.”

While he loves to cook and serve others, Lilite doesn’t partake in everything he creates. In fact, as a result of some digestive issues that plagued him for years, he avoids most meats and dairy. When he moved to Oklahoma, he consulted a nutritionist along with his doctor. Through trial and error, he landed on a diet of fish, eggs, fruits and vegetables.

“Now, I don’t eat meat and I don’t eat dairy, but I still love cooking,” he said. “I cook by texture and not by taste. It’s the smell and the texture.”

And so it is for Dr. Louima Lilite, a man of divine musical talent, who chooses to teach and transform rather than travel and perform. A man who intentionally pours his life into bringing life transformation to others. A man who once took a gift of $25 and sacrificially turned it into a lifelong passion for serving others. A man who delights in cooking gourmet delicacies which he himself cannot enjoy, save for the fulfillment he feels by spreading happiness and satisfaction to others.

When apart from his duties at OBU and in the kitchen, Louima and his wife, Dephanie, enjoy spending time with their daughters, Abby and Estelle, taking road trips, playing board games or enjoying music together.

Drs. Green and Jones Installed to Academic Positions During Convocation