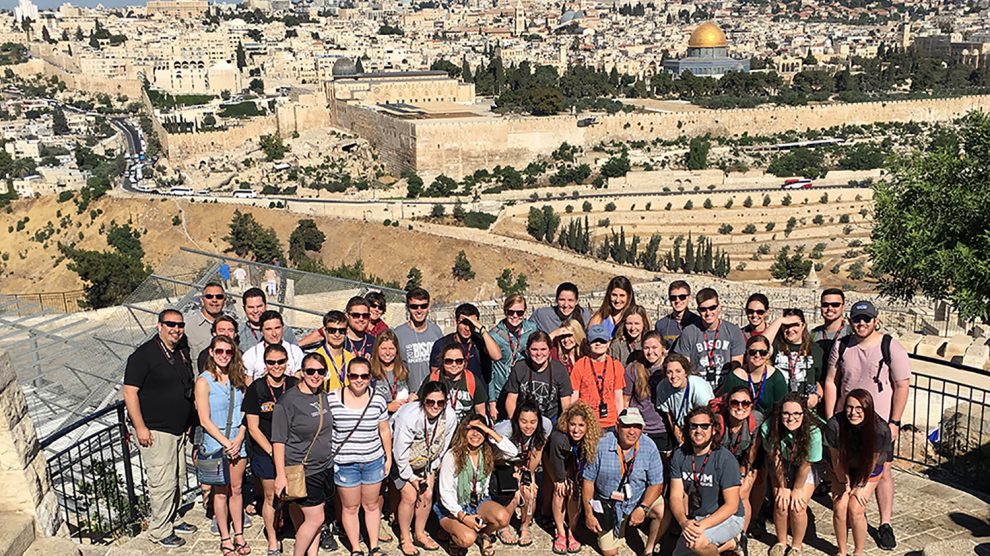 A group of 36 students and two faculty from Oklahoma Baptist University took the trip of a lifetime May 20-June 1. Led by Dr. Alan Bandy, Rowena R. Strickland associate professor of New Testament, and Odus Compton, associate vice president for student development and dean of students, the group traveled throughout Israel, walking where Jesus walked, learning about his life and ministry on earth, and encountering glimpses into the current situation of the nation of Israel. The Israel trip is an educational excursion designed to engage the current collegiate generation with the nation of Israel from a biblical, historical, geo-political and socio-economic perspective.

Students on the trip were nominated and screened by both faculty and the University’s Global Outreach Center. The students must be in good standing with the University, and preference is given to those that have previously participated in an OBU GO (Global Outreach) trip. Juniors are also given preference, with some sophomores and seniors selected as well. Finally, the students must be affirmed for participation by the president as this trip is seen as a presidential honor. This is the second year OBU has organized this trip to Israel.

The purpose of the trip was twofold: to connect with the life and ministry of Jesus in a personal way by visiting places he visited and to introduce the students to the situation of modern Israel by seeing the reality of the threats in Israel and by hearing from a variety of speakers about aspects of the modern culture and political climate.

For Compton, this first-time trip to Israel was memorable, to say the least.

“I am so grateful for the opportunity to participate in the journey,” Compton said. “The experience was unbelievable for me, and putting so many places and stories in context was encouraging and challenging to say the least. My favorite place was the ancient city of Meggido that was just unearthed beginning in 2002. In the dig, they discovered a 1st century synagogue on the shore of the Sea of Galilee. It was a fisherman’s port and most assuredly a place that Christ would have frequented with his disciples. To step onto the threshold of that synagogue and to realize that Christ had done the same some 2,000-plus years ago was humbling.”

The visual glimpses and connections to the life of Christ throughout Nazareth left an impression on Bandy.

“For me, the first real ‘aha moment’ happened in the Nazareth Village in a living museum built on the remains of a first century vineyard and wine press,” he said. “The guide pointed out numerous aspects of daily life in Nazareth. While the guide was speaking, it hit me that Jesus spent just about 30 years in this quiet little town that was so obscure and insignificant, that outside of the New Testament, it is virtually unmentioned. It helped me recognize the humility and simplicity of Jesus.”

“The guide pointed out the winepress, wall, and watchtower and then reminded us about a parable where Jesus said a man dug a winepress, built a wall and watchtower,” continued Bandy. “In that moment, the way Jesus used examples from things he may have seen in Nazareth snapped into focus and I was momentarily stunned. It brought aspects of Jesus to the forefront of my mind that I had never considered before.”

Despite the strenuous schedule of the trip, both professors stressed how much they enjoyed experiencing the trip with students from OBU.

“I was blessed immensely by the OBU students that went on this trip. The hours of time spent together, conversations, jokes, and moments of tearful worship made this trip so meaningful,” Bandy said.

The trip did not solely focus on Israel of the past, but also on Israel in the present. Compton’s eyes were opened to the current situation in ways he did not expect.

“I learned that the conflict in the Middle East particularly in Israel is a lot more complicated than I even imagined,” he said. “I also learned that pilgrimage and ritual do not suffice for a real relationship with Christ.”