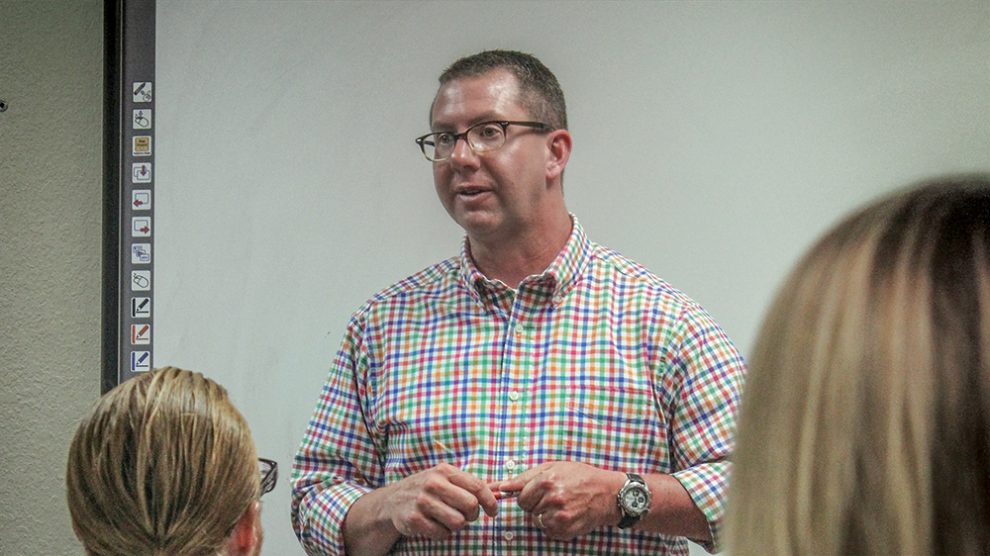 Restoring Hope…One Oklahoman at a Time

Kris Steele is a familiar name for most Oklahomans. As former Speaker of the Oklahoma House of Representatives, he was seen on the evening news, in the papers, online and everywhere in between. Yet, his position of power and influence has not defined his life. Rather, that role helped him discover a purpose for which he now strives – one with a vision to better the lives of individuals and the future of Oklahoma.

Feeling called to pursue a career in ministry, Steele determined OBU would provide the best training to prepare for that calling. In 1997, he earned a bachelor’s degree in religion from the University.

He uses his ministry training and experience along with the
knowledge he gained as a legislator to serve as the executive director of The Education and Employment Ministry (TEEM), a nonprofit organization dedicated to breaking cycles of incarceration and poverty through education, personal development and job readiness training. TEEM helps former prisoners discover their talents and matches their skills and abilities with employment opportunities that benefit the employee, employer and entire community.

Steele became motivated to serve in this capacity after reading a state audit which revealed Oklahoma’s incarceration rates were the highest in the nation. According to the audit, Oklahoma has more crimes punishable by incarceration than other states.

“As a result, spending for corrections had become our state’s second fastest growing expenditure,” Steele said. “Every year we would add to the list of crimes punishable by incarceration and/or we would add to the minimum length of time a person would have to serve once incarcerated. I began to study the return on investment for all of this money being spent.”

Steele also took a careful look at successful re-entry programs for former prisoners in other states and their efforts to increase public safety. He researched crime rates, for both violent and non-violent offenders, male and female incarceration rates and the likelihood for released inmates to return to prison.

“What I realized is that when we incarcerate a non-violent offender, even for a short period of time, and we fail to address root issues such as substance abuse, mental illness, lack of education, lack of job training, lack of basic life skills … statistically that person will transition back into our community at a greater risk to public safety than even before they were incarcerated,” he said.

This revelation placed a burden on him and instilled a passionate desire to help turn around this pressing issue within Oklahoma. In November 2012, as his time in the legislature came to an end, he began serving as the executive director at TEEM and was charged with addressing the issue.

“I don’t think there is such a thing as a spare Oklahoman, and the fact that we would exclude somebody or throw them away just because they’ve stumbled is not okay with me,” he said. “I tell people all the time that I’m very thankful that I’m not judged by my worst moment in life, and I don’t think it’s at all fair that we judge someone who’s been impacted by incarceration by his or her worst moment in life.”

Although he believes that violating the law calls for consequences, he also believes releasing incarcerated individuals back into the community without a clear path to success is problematic.

TEEM has developed a re-entry service model that helps people break the incarceration cycle. Elements of the program include basic education, job training and mentoring. TEEM case managers also connect participants with housing, substance abuse treatment, transportation and health care. A legal aid attorney helps them through legal issues to identify and remove as many barriers as possible before they transition into the community, and job placement coordinators teach basic computer skills and interviewing techniques.

“When you see hope renewed within a person who is living in defeat and the person comes back to life and understands they have a future and a new beginning, it’s a pretty remarkable thing,” Steele said.

All TEEM participants are presented the gospel through Bible studies led by volunteers and board members. Those looking for a church home are connected with a local congregation focused on discipleship and development.

“The faith component also comes into play with the way we as a staff conduct ourselves,” Steele said. “We do our best to work and operate in a spirit of grace, mercy, forgiveness and love. Regardless of what a participant’s beliefs may be, they will get the same measure of love that we give anybody.”

Steele credits his OBU education with preparing him for the challenges of his career.

“My time at OBU was enlightening and enjoyable,” he said. “It provided an understanding of the importance of public service and established a foundation to address societal issues in positive, productive ways. My OBU experience reinforced the value of perseverance, hard work and collaboration with others.”

A calling comes when God reveals a specific purpose for someone’s life. Kris Steele heeded his calling and has committed himself to a life of purpose, full of love and service, for Oklahomans in need of support as they work to rebuild their lives.