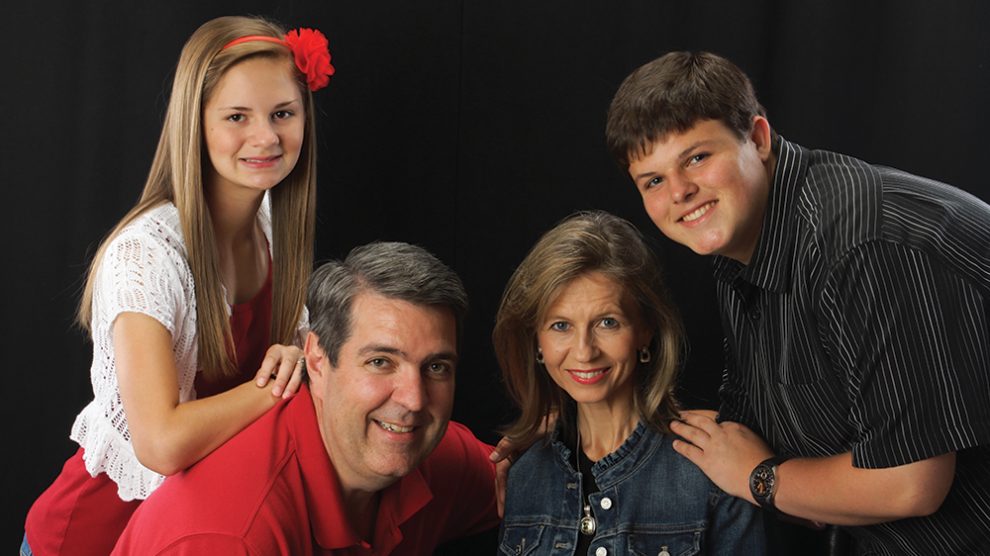 Joe Wilkins, investment relations officer for United Parcel Service (UPS), has led an inspirational life. Those who know him and his story are challenged to live a life of excellence as he has.

Wilkins is the first to attribute his personal and professional success to Jesus Christ. His life of excellence and positive approach to circumstances is defined by tried and true principles he derived from personal Bible study and learned by experience during his undergraduate years at OBU.

“Emotions are temporary,” Wilkins said, “but you can have joy in all situations, regardless of what’s going on in your life, through Jesus Christ, because of what He did on the cross.”

Wilkins, the youngest of four siblings, was raised in a Christian home by parents who worked hard and valued success.

“Church, school, sports and family, that’s just what we did,” Wilkins said. “My mother and father didn’t ever attend college, but both of them were wise about the ways of the Lord, and He led them in all areas of their life.”

His father died unexpectedly when Wilkins was 14 years old, leaving him and his mother on their own at home. Wilkins’ mother, who had never worked outside the home before, began cleaning houses and soon found a job working for the Potter County Jury Department. Even so, as high school graduation neared, he wasn’t sure what his next step would be.

“I wanted to go to college, but I had no money,” he said. “I had no idea how to get there. I typed up a letter that said ‘My name is Joey Wilkins. I play baseball. I want to go to your school. Do you have any money for me?’ I sent it to five or six schools.”

He received rejection letters from all except one – Oklahoma Baptist University.

“Coach Bobby Cox called and said, ‘Joey, I called your high school coach. We need a catcher. We can’t give you a full scholarship, but we can help you out,’” Wilkins said.

And so began a relationship between player and coach that would impact Wilkins in ways he could not possibly predict.

“Coach Cox showed me grace for four years,” Wilkins said. “He was a father figure to me, although he probably never knew that. He knew what I was going through and worked with me rather than giving up on me. He saw down the road in my life rather than focusing on who I was in that moment. No matter what I did, he stayed positive and kept picking me up and dusting me off.”

Wilkins took a part-time job at UPS to help pay for school as he only received a partial scholarship for playing baseball.

Wilkins’ schedule left him less than enthusiastic about attending class at times. Again, it was an OBU faculty member that helped direct his thinking.

“Max Brattin was my economics professor and my counselor,” he said. “He made class fun and brought economics alive for me. He also really liked sports and came out to our games to support all of us.”

Wilkins’ learning was not limited to the confines of a classroom. His education stretched to the baseball diamond as well.

“I learned that success is more mental than physical,” he said. “On the field, you’re constantly thinking and evaluating. You make informed decisions. Baseball taught me that successful people are always learning, always working toward a goal.”

Those lessons learned on the baseball field translated into the way Wilkins approaches his career and the way he works with others.

“It’s good to be liked and happy and energetic,” Wilkins said “But if you really want to help people and do well, you need to work hard and be accountable to your teammates, whoever they may be. You have to get results. You have to be effective for yourself and for them.”

Wilkins continued to work for UPS following graduation and began to advance within the company, earning his Master of Business Administration from Oklahoma City University along the way.

“Being successful is about servant leadership,” he said. “It’s about making your teammates, your boss, and everyone around you better, understanding their goals and helping them achieve them. When you do that, you’ll be blessed with the outcome every time.”

Thirty years into an illustrious career with UPS that has provided for his family, Wilkins is passionate about giving back. He currently serves on the board of C-5 Georgia, a program that takes seventh graders with high academic potential, but limited socioeconomic means, through a five-year mentorship program designed to groom them for success. He is also an active member of First Baptist Church, Atlanta, where he teaches a Sunday school class for young married couples with his wife, Stephanie.

“I’m just so thankful for a Christian education, and OBU is unapologetic about being Christian,” he said. “They’re not afraid to teach the truth of the Bible and the unconditional love of God. People there loved me when I was sometimes unlovable. They taught me that you can be bold in your faith.”

Above all, Wilkins is grateful for the unmerited favor God has shown him through the love and support of his wife and children, his parents, the OBU faculty, friends, family and UPS.

“I’m just a knucklehead kid that God has chosen to bless. I don’t understand why, but I’m so very thankful and want others to experience the same joy.”