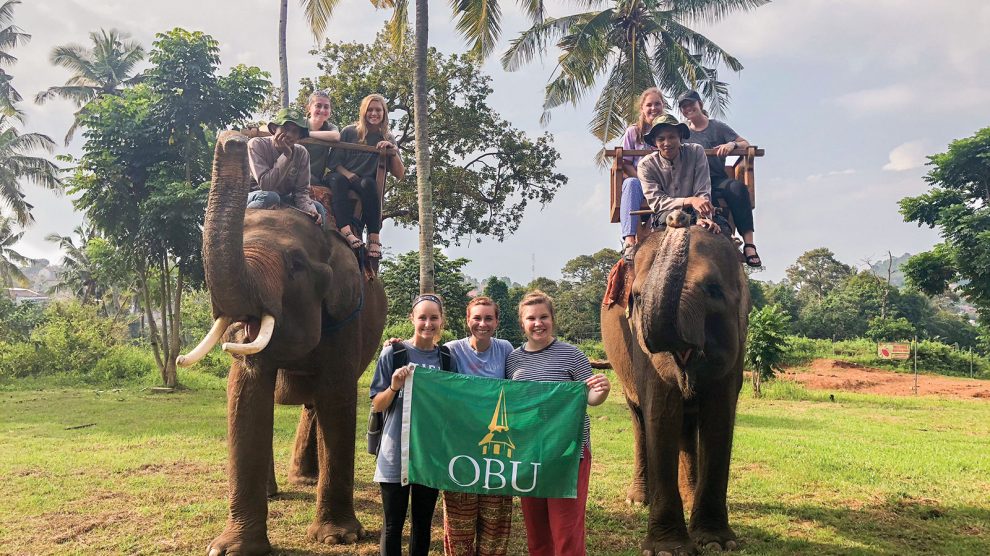 A group of six OBU nursing students and two mentors took the voyage of a lifetime this summer, traveling to Bandar Lampung, Sumatra, Indonesia, on a multi-week, cross-cultural ministry experience. The journey was a Global Outreach (GO) Trip, with the purpose of extending the Gospel of Jesus Christ while also giving students a chance to experience a different culture.

Throughout the trip, the team of nursing students had the chance to observe nurses, doctors and patients at a local hospital, Rumah Sakit Imanuel, and assisted with a local English support group.

“The name [of the hospital] alone opens the door to important conversations, and some come to the hospital feigning illness to hear the good news,” junior nursing major Devyn, from Meeker, Oklahoma, said. “There, we got to observe nurses, talk and build relationships with nurses and doctors at the nurses’ stations, and visit with patients. Many patients, or their families, let us pray for them and whatever they were facing in the hospital, whether that was an illness, procedure, dying family member, birth or any other issue.”

The team also visited with Connect, an English support community, where they had the chance to learn about and share cultures with the “Connectees.”

Devyn had never been out of the United States before her GO Trip but wanted to gain more practical experience in both nursing and sharing the gospel. Now, she is considering returning to Indonesia in the future on another GO Trip.

“Aside from the fact that God called me to go somewhere this summer, I chose to go to Indonesia because it was a trip for nursing majors and I thought it would be a good opportunity to learn some basic nursing skills for my upcoming junior year,” Devyn said. “I also chose to go because serving hospital patients, even with my limited skills, seemed like a wonderful way to build relationships and possibly to share the good news with them.”

According to Devyn, simple things like transportation were more hectic in Indonesia.

“Traffic was crazy [because] there aren’t really any rules and the primary family car is a motorbike (not a motorcycle, which is a larger vehicle). Parents often transport one to three children on a single bike,” Devyn said. “Bikes would weave in the small spaces between cars on the road, so while there were lines on the road that would denote two or three lanes in America, roads were actually more like five to seven lanes.”

Along with cars and motorbikes, the streets and city were also filled with people selling various things to get tips or donations. While employment isn’t hard to find, Devyn said well-paying employment is, resulting in shops hiring many employees for small wages.

“As part of Ramadan, Muslims are more generous to the poor, so we often saw children aged four to 10 trying to sell newspapers at stoplights, pressing their faces and the papers to your car window,” Devyn said. “Some also had small instruments and would offer to play them, and older children would sometimes be seen in animal costumes, trying to get tips. Disabled adults and anyone else who could have reason to seek donations from strangers would also weave between stopped cars to ask for money.”

Devyn believes GO Trips are essential in allowing OBU students to experience the world and to see how Christianity looks around the world.

“I think it is important for OBU students to participate in GO trips because it shows them that the world is so much bigger than the bubble we all live in,” she said. “It can show them, as it did me, just how universal the church is. Even if they don’t understand any word in a church service, they can still feel at home because they are surrounded by like-minded people.’”

“GO Trips truly show us how much we are incapable of, and how dependent we have to be on God to use us and work through us. It can be incredibly difficult to be on the other side of the world, away from home and all its comforts, with few people you know, and with few people who speak the same language,” Devyn said. “GO Trips allow God to work in us and change us in a way unlike any other.”

PAYTON CLARK is a senior communication studies major. She interned in the OBU Marketing and Communications office during the summer of 2018.