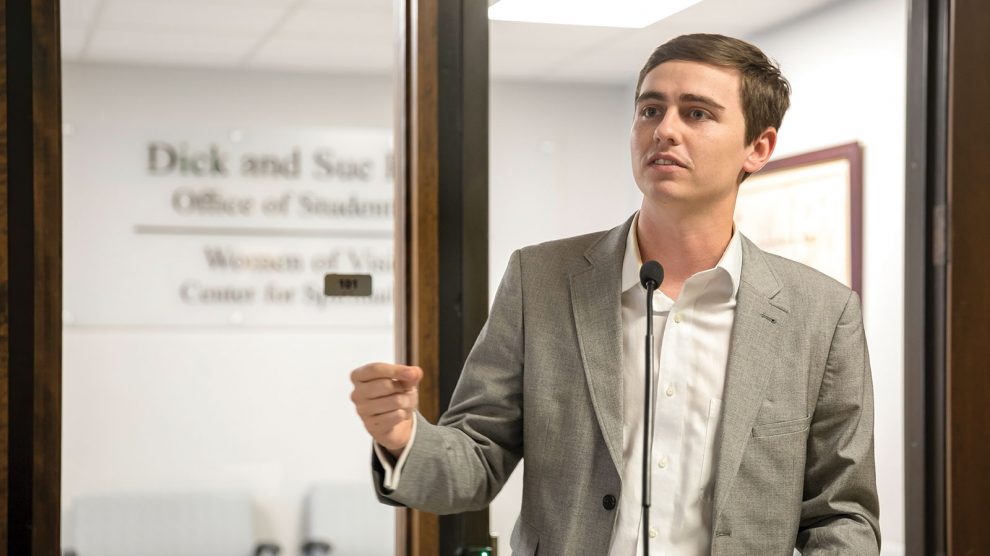 OBU hosted a ribbon-cutting ceremony for the dedication of the Dick and Sue Rader Office of Student Life and Women of Vision Center for Spiritual Life Friday, Oct. 5.

The newly renovated section of the Geiger Center officially opened at the beginning of the fall semester and will continue to serve students and faculty for years to come.

The family of Dick and Sue Rader provided the lead gift for the remodeling project while an earlier gift from the Women of Vision giving circle served as the catalyst for the project resulting in nearly twice as much meeting space available for spiritual life activities and events.

“We are extremely grateful to the family of Dick and Sue Rader for this donation that enabled us to bring these two offices together in the heart of the OBU campus,” President David W. Whitlock said. “This move provides improved access and increased interaction between students and staff members.”

The renovation included relocating OBU’s copy center to The UPS Store on the corner of Kickapoo and MacArthur and moving the mailroom to the southeast side of the GC. These areas along with the original offices and meeting spaces on the lower level of the GC were remodeled and reconfigured to provide spaces for all student life and spiritual life offices, meeting spaces for employees and students, conference rooms for student clubs and organizations to use, and an event center.

“At OBU student life is spiritual life, and spiritual life is student life,” said Dr. Will Smallwood, senior vice president for advancement and university relations, as he welcomed guests to the ceremony. “This move represents physically what we have already been doing philosophically. We are so thankful for the opportunity to bring these two together in the heart of the campus to demonstrate our love for students and our desire to see them grow.”

Connelly Rader, a grandson of Dick and Sue Rader and 2018 OBU alumnus, spoke on behalf of the Rader family saying he was grateful that his grandparents’ legacy would continue to have an impact on OBU students for years to come.

“What’s incredible about people like Dick and Sue Rader is that they can live on so significantly through so many people,” he said. “I didn’t experience that as fully or holistically until I came to OBU.”

Dick and Sue Rader are OBU alumni and lifetime supporters of the mission of Oklahoma Baptist University. Dick was a longtime OBU administrator and faculty member. He earned a bachelor’s degree in English from OBU in 1963, while Sue earned a bachelor’s degree in philosophy from OBU in 1961. He also earned a bachelor of divinity from Southwest Baptist Theological Seminary in 1966 and a Ph.D. in Christian ethics from Southwestern Seminary in 1980. The Raders were appointed as missionaries by the Foreign Mission Board of the Southern Baptist Convention in 1967 and served for 12 years in Zambia and South Africa.

Gretchen Trimble, director of development, spoke on behalf of the Women of Vision. Each year, members of the Women of Vision make individual gifts, which are then pooled together to fund a project voted on by the collective organization. Last year’s selected project was the remodeling of the center for spiritual life.

“It is so fulfilling and rewarding to know that last year’s investment helped move spiritual life to a central location here on campus, offering our student body better access to resources and meaningful encounters,” she said. “We did that together, and it is an honor to know that what we have been doing together over the last three years resulted in something like this.”