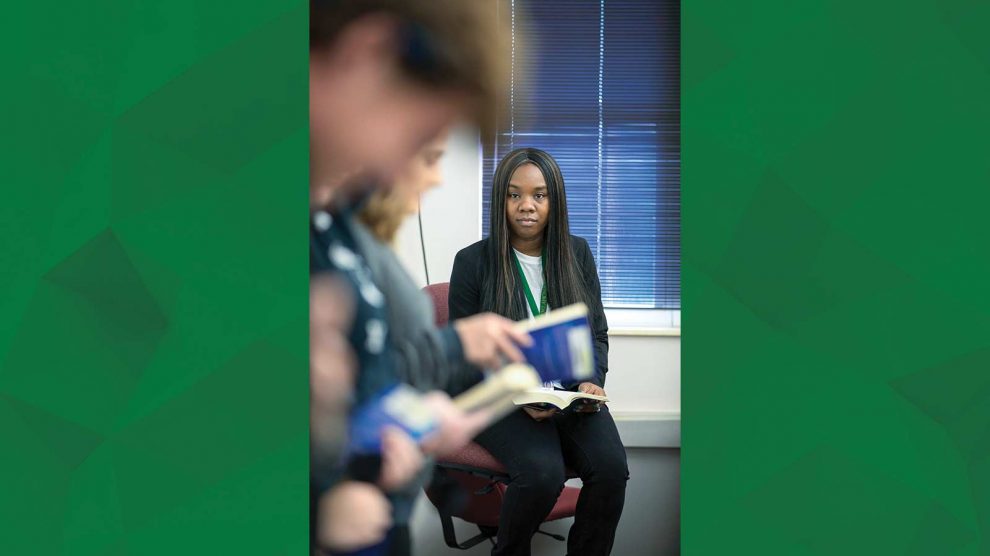 While fulfilling her calling by teaching computer science at OBU, Jacqueline Corley, ’12, encourages young girls to find their calling and passion through Girls Inspiring Generations International.

From the time Corley became a Christian at age 15, she knew staying grounded in faith was her top priority, so she sought out ways to do so.

Corley was first introduced to OBU through Super Summer, a Christian camp hosted annually on the campus in June. The atmosphere and Christian influence on Bison Hill won her over.

“I was intrigued by OBU and knew that I wanted to go to a Christian university. I fell in love with the campus and decided to attend,” she said. “Even though I came to OBU with a strong faith, I was able to grow and get grounded in my faith here.”

Corley recalls Dale Griffin, assistant vice president for spiritual life and dean of the chapel, helping her work through her faith.

“I worked a lot with campus ministry when I was here and Dean Griffin helped me stay grounded,” she said. “We had many conversations about faith. It was great to be able to stay grounded even on the days when I felt like I couldn’t.”

Corley is grateful for both the spiritual support and professional encouragement she received from faculty and staff.

“OBU prepared me personally, professionally and spiritually. There were a lot of people here who believed in me,” she said. “Dr. Renita Murimi [associate professor of computer information science] has been a great encouragement. I have loved learning about her life in India and being overseas. She has always been encouraging to me both when I was a student and now as a co-worker.”

Corley was on the track team at OBU and won All-Conference Athlete in the 100-meter-dash. Track Coach Ford Mastin and the track team were important influences in her life.

“Coach Mastin was always concerned about your life first,” she said. “There were times when I was injured during the track season, but he was always more concerned about me getting healthy, than me coming back to run. As an athlete, I just wanted to get back out there, but he was very good about monitoring that.”

Corley’s favorite OBU traditions include the beanie and “The Walk,” along with the memories they bring back for her.

“The beanie reminds me of classmates and makes me feel like I am connected with a group that is not just here on campus, but all around the world,” she said. “I also like ‘The Walk’ because I had the opportunity to do both walks, one as a freshman and the other as a senior. While they are a little bit different, it was so meaningful to do my first walk around campus to places I had not even been yet and then to walk to commencement as a senior and remember all of the amazing things that happened around campus. It was amazing to see and think about all of the different ways I had grown here.”

After graduating from OBU, Corley began graduate school at Oklahoma City University, where she studied computer science in the master’s program. In 2012, she met her future husband, and they married in 2016. They are now expecting their first child.

In June 2017, Corley founded Girls Inspiring Generations International, Inc. whose goal is to inspire teen girls to become who they are meant to be and not to let society dictate who they are.

“Girls Inspiring Generations came out of that quest because I knew that I needed to share what I had learned,” she said. “I got tired of watching so many girls not really step into who they were called to become and ending up being with or around the wrong people. I realized that they didn’t know who they were.”

So Corley now teaches them the lessons which took her years to discover on her own, helping girls understand the importance of surrounding themselves with the right people and following their calling. One of the core programs, Teen Girl Revolution, is an eight-week program designed to inspire them to be who they are called to be. She has even begun taking this message online to other countries.

“There are girls in other countries who are participating even without me trying to get them to do it,” she said. “I love watching girls step into the things that they really want to do because of their impact with this organization. It has been so beautiful to see how many girls are now leading other girls to empower others.”

In her spare time, Corley still loves to run. She is on the worship team at People’s Church in northwest Oklahoma City and enjoys reading, journaling and trying new things.

“You have to have a purpose for life,” she said. “Once you know your purpose, you can truly give God glory.”