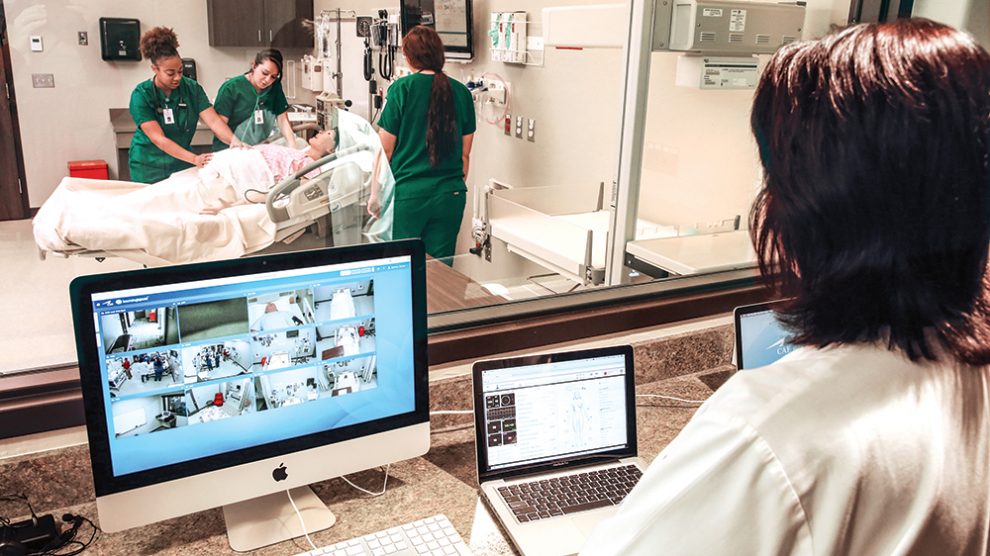 Known for being a trailblazer in Oklahoma nursing education, the OBU College of Nursing has developed a solid reputation for producing nursing graduates who are highly skilled and in-demand.

In the fall of 1952, the Oklahoma State Board of Nursing granted approval to OBU for Oklahoma’s first baccalaureate nursing program. This degree was the first four-year baccalaureate program for nursing in the state among all universities. OBU blazed the trail as numerous others have since followed.

The University’s decision to add a four-year nursing degree met several needs. First, following World War II, OBU had a vision to increase career opportunities for female students and to recruit more women to the University. During that same time, the board of directors of Wesley Hospital in Oklahoma City discontinued its diploma nursing program and offered the facilities of the hospital to a university interested in developing a baccalaureate program. In March 1952, a contractual agreement was drawn between OBU and Wesley Hospital and the state’s first four-year nursing degree program was born.

The first class of 11 students graduated in 1956 and the OBU nursing program was accredited by the National League for Nursing in 1960. This accreditation continued without interruption until the School of Nursing affiliated with American Association of Colleges of Nursing, its current accrediting body.

In 2011, the School of Nursing
became the College of Nursing. The College now offers a Bachelor of Science in Nursing degree, an RN to MSN degree with the option to exit with a BSN for nurses with an associate degree or diploma, an LPN to BSN degree, and a Master of Science in Nursing degree with a focus in either nursing education or global nursing.

As OBU’s nursing graduates continue to be in demand and the reputation of the University’s high quality nursing education continues to grow, the College is poised to take the next step.

Plans began to develop a few years ago for a new nursing facility, a stand-alone building for the College of Nursing. Nick Stavros, founder of Metro Appliances and More, provided the lead gift for the building in memory of his late wife Jane. Her father was Victor C. Hurt, legendary OBU athletic director and football, basketball and track coach. With this gift, construction commenced in May 2014.

The facility is unrivaled in the state of Oklahoma. The attention to detail and inclusion of real-world medical technology will allow nursing students to be well prepared to enter the nursing workforce.

“The opening of Stavros Hall has been greatly anticipated by all of the senior nursing students,” said Travis DeWall, senior nursing major. “Not only will nursing students now have a building for classes, but with the new simulation equipment and technology, students will feel like they are performing their skills in a real hospital setting.”

Technology of the Future

The most impressive features are found in the Stavros Hall simulation labs. The technology, design and cutting-edge practices in use for training the next generation of nurses are second to none. The labs bridge the gap between learning and practice, placing students at the front lines of patient care, all while under the watchful eye of their professors.

All simulation scenarios are recorded so instructors can review the videos during debriefing sessions with students. These sessions provide unique opportunities for students to receive specific feedback that helps them improve their skills. The training curriculum consists of single- and multi-patient scenarios that include respiratory, cardiovascular, neurological, maternal-child, trauma, mass casualty and disaster situations.

Patient simulators significantly enhance realism, as they can breathe, bleed, speak and even give birth to a lifelike baby that cries upon delivery. The lifelike devices also simulate complications and various life-threatening scenarios while allowing students to monitor vital signs and administer treatment.

Dr. Nichole Jackson, assistant professor of nursing and simulation director, is thrilled with the level of training the simulation labs will provide.

“The lab space and simulation suites at OBU will improve the quality of education our students receive by allowing faculty to immerse students in realistic hospital situations where students can truly see the outcomes of their nursing actions,” she said. “The state-of-the-art technology mingled with applicable simulated scenarios will help students connect classroom theory to professional nursing practice. In doing so, students will be better equipped to care for complex and diverse patient situations while being readily adaptable to the rapidly changing healthcare environment they will enter upon graduation.”

With this facility, OBU is poised to once again take the lead in nursing higher education in the state of Oklahoma, a position familiar to the College since its earliest days.

“Simulation is a part of the future of nursing education,” Jackson said. “With this facility, OBU is well positioned to be a leader in the simulation arena and beyond.”