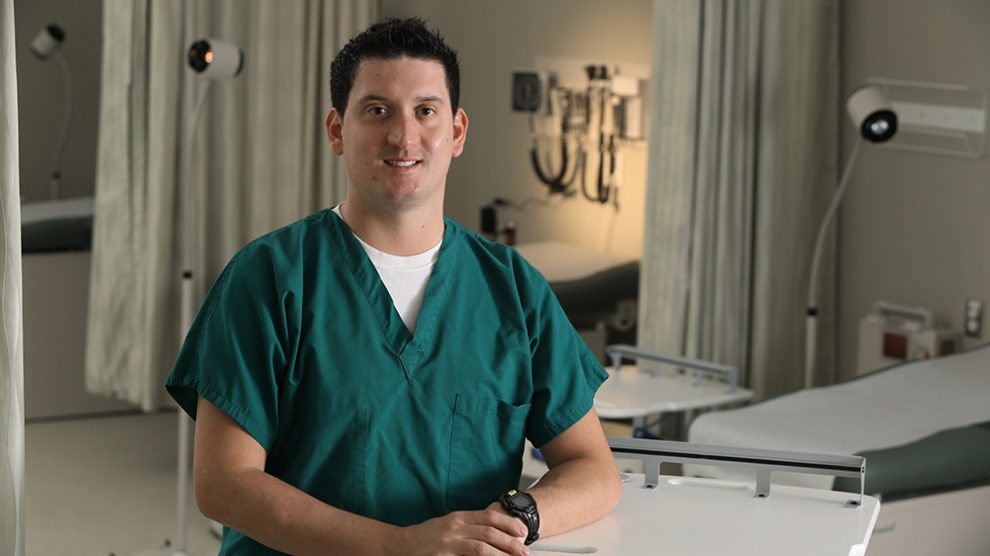 Taylor Dickinson, ’11 and ’14, shares his perspective about the impact his OBU education had on his career and what led him to choose the OBU College of Nursing … twice.

Taylor Dickinson is a busy man. He works 12-hour shifts as a house resource nurse at Oklahoma Heart Hospital South in Oklahoma City. He also serves as an adjunct professor of nursing for OBU, managing undergraduate students in clinical rotations at the hospital. He’s married to an elementary music school teacher, Ashlynn Streck Dickinson, ’13, and he’s earned not one but two nursing degrees, with plans to pursue a third.

Less than five years into his nursing career, Dickinson understands the benefits and impact his OBU education has made on his career. He wants others to experience the OBU difference as well and is helping to spread the word.

Dickinson was born in Fort Worth, Texas, and spent time growing up in Amarillo, Oklahoma City, and Moore, before settling in Enid, Oklahoma, where he graduated high school. He journeyed to OBU and earned a Bachelor of Science in Nursing and a Master of Science in Nursing Education. He worked at St. John Medical Center in Tulsa, then in the Critical Care Unit as a staff nurse at Oklahoma Heart Hospital South before transitioning in September 2015 to his current role as a house resource nurse.

“Nursing is a challenging but also very rewarding field,” he said.

“My experience at OBU helped teach me how to care for the patient holistically.”

“I’ve had the opportunity to work in step-down and critical care units, treating patients with skills and techniques that are constantly changing and improving, while also teaching patients about their condition and available treatments. I’ve been involved with assisting patients to heal psychologically, spiritually and physically. Assisting them during a stressful point in their life is such a rewarding thing. It’s a blessing to see them progress throughout their stay until they get to that point where it’s time for them to go home.”

Dickinson reflects fondly on his undergraduate nursing education on Bison Hill, crediting it with making a profound impact on his career and his worldview.

“OBU allowed me to take the experience I gained from a liberal arts university and broaden my horizon as a young professional,” he said. “It’s given me the ability to take little pieces of the arts, history and science, and relate them to everyday life. It truly has helped me become a well-rounded person, in ways I may not have experienced at another university.”

He found success by plugging into study groups and collaborating with other nursing students.

“A lot of times we would meet at another student’s apartment after everybody was assigned a different chapter of the book or a different subject to study. As we became masters of that subject, we began to teach others. Not only did we learn for ourselves but having to teach it to others helped us to better understand the concept as a whole. Not only did we study together, but we lived life together. You don’t find that at most universities.”

He was drawn to Bison Hill by the reputation of the nursing program, the small student to faculty ratio, and the program’s long history as the first baccalaureate program of nursing in the state of Oklahoma.

Dickinson said potential nursing students only need to consider the facilities and faculty to know OBU is the best choice for their education.

“Having Stavros Hall, a state-of-the-art nursing facility with some of the most up-to-date technology and simulation, will give you an opportunity you may not get elsewhere in Oklahoma,” he said. “The faculty members are tremendous. With a low student to faculty ratio, your professors get to know you as a person and not just as a number.”

“The professors don’t want you only to be
successful while you’re at OBU; they truly desire for you to succeed in your career and as a person, so they’re going to challenge you.”

When Dickinson was ready to pursue a graduate degree, he knew immediately it would be through his alma mater and he knew it would be in nursing education.

“Education has always been something that runs in my family,” he said. “My wife, Ashlynn, is an elementary music teacher and my mom is a teacher, too. Being able to see that spark in a student when they fully understand the material is something that always interested me.”

He learned about the MSN through his instructors while completing his undergraduate degree and knew he wanted to continue studying his profession from a Christian worldview.

“I wanted to be with peers of like mind who truly desire to bring holistic care to the patient,” he said.

He found the OBU graduate program to be challenging, but also flexible enough to work around his busy schedule as a working professional.

Just as he endorses the undergraduate program, Dickinson also strongly encourages fellow nurses to take advantage of the MSN degree at OBU.

“The OBU program gives you the ability to take what you have learned and expand on it,” he said. “If you’re at that point where you’re deciding whether you should pursue a master’s degree in nursing education, I encourage you to earn your degree
at OBU.”