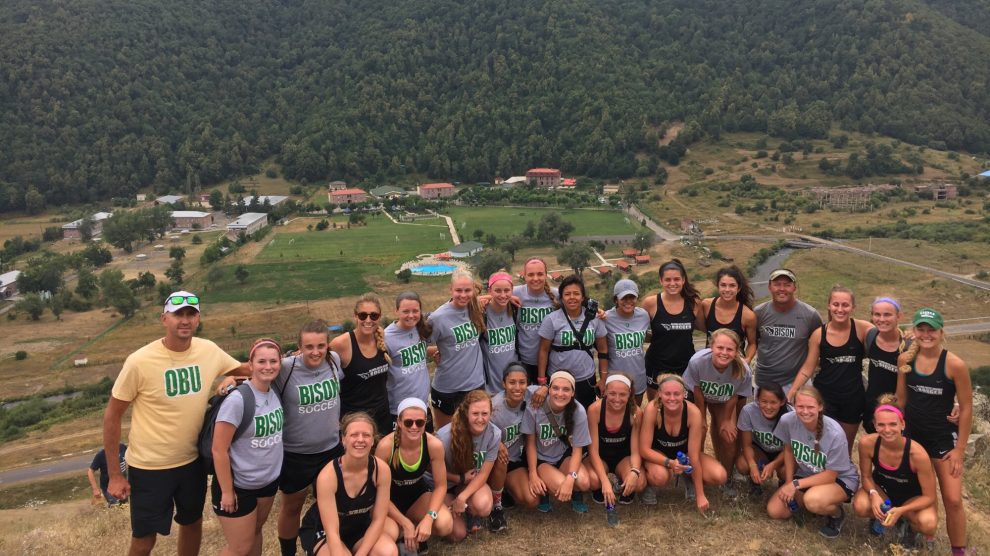 The Lady Bison soccer team had the experience of a lifetime this August, traveling overseas together for nearly two weeks. Along the way, they experienced new competition on two continents, while also partnering with OBU’s Global Outreach Center in order to bring the Gospel to the world.

Junior Sam Engles explained that this trip was not like others she had participated in before, with door-to-door sharing and community service projects. “The Lord had a different plan for this trip,” she said.

Global Outreach trips, or GO Trips, are an integral part of OBU’s mission to “integrate faith with all areas of knowledge” and “live worthy of the high calling of God in Christ.” Each GO Trip participant must raise the funds to participate, as well as attend a full semester of orientation and training ahead of the outreach team’s trip.

During the team’s journey overseas, they first had the opportunity to train with the women’s national soccer team in their location in West Asia. This created an opportunity for the Lady Bison to use their talents to open a conversation about the Gospel with the national players they met. However, visiting another country always comes with unique difficulties that must be overcome, particularly the language barrier.

“The first day of training with the national team was very difficult,” Engles explained. “The language barrier made it hard to communicate on the field, but also off the field, because we weren’t able to connect with them. That night, we prayed as a team that God would break down those barriers and help us reach the hearts of the players.”

That prayer was answered the next day. Though giving each of the national team players and coaches a shirt might not seem like a grandiose gesture, it was enough to create a greater personal connection. It also opened doors for the local church to meet the players and coaches.

“The Lord used that simple gift to bridge the gap between the two teams. That day at lunch every single player and coach from the national team wore the shirts we gave them and they continued to wear them for the rest of the week.

“This created a way for the [local church] to start having conversations with members and coaches of the team about the gift God gave us and how much He loves us. I learned that the people [of West Asia] just want to feel love. So the fact that we came to train with them meant so much. Even though we couldn’t speak their language, we were able to show the love of Christ through our actions.”

After a week in West Asia, the Lady Bison made the long trek to England. Although the language barrier was no longer an issue that didn’t mean that the different cultures always understood one another.

While in England, OBU partnered with St. Andrew’s Church in Cambridge for the first couple of days. The Lady Bison took the opportunity to connect with local kids while in Cambridge, playing futsal, a small-sided version of soccer that’s played on a court roughly the same size as a basketball court. After that, the team took advantage of the training time spent with the West Asian team to win a couple of matches against professional teams from Newcastle and Harrogate before heading home to prepare for the fall semester.

The Lady Bison were able to bring people across the globe closer to God using their unique talents and abilities. At the same time, the team grew in their own relationship with Christ as they cultivated servants’ hearts.

“The trip really couldn’t have gone much better,” said OBU head coach Michael White. “My team served and consequently was served. While I know God will use our offerings of time, money and energy to do many wonderful things for His Kingdom in other lands, I’m even more convinced of the work He has done and is doing in me, my staff and the OBU women’s soccer team through our experiences.

“I’m eternally grateful to the gracious donors, a school like OBU that encourages these types of trips, and players with trusting families who have supported the trip from the beginning.”