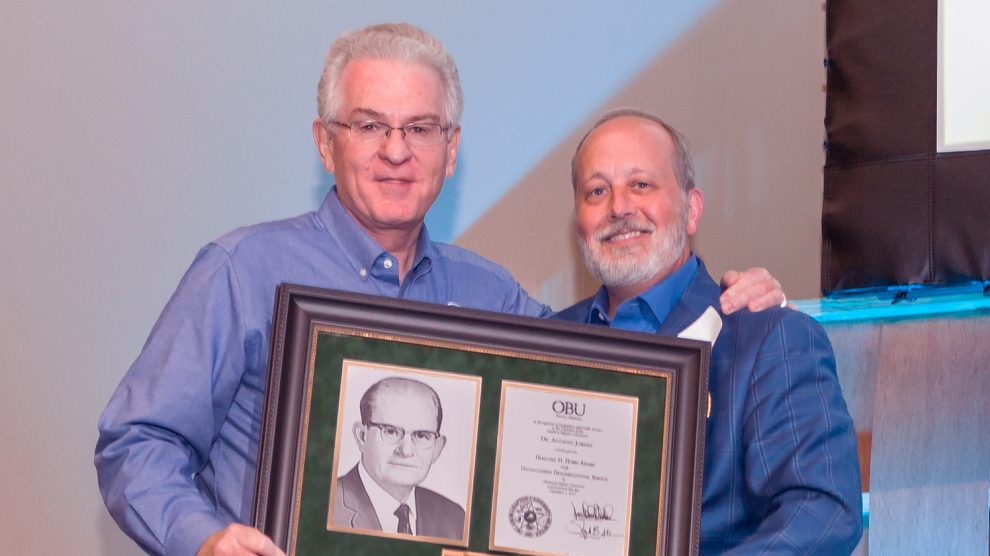 The award is named in honor of the noteworthy Southern Baptist denominational service of Dr. Herschel H. Hobbs, a prolific author, preacher and radio program host. Hobbs was pastor of the First Baptist Church of Oklahoma City from 1949-72. He died in 1995. He is also the namesake of OBU’s Herschel H. Hobbs College of Theology and Ministry.

Whitlock noted the special bond between OBU and Falls Creek, a bond that was strengthened and bolstered, along with many other aspects of the University, through Dr. Jordan’s work.

“OBU and Falls Creek have joined together in similar missions from the very beginning,” Whitlock said. “One of the very first Falls Creek missionaries in 1917 was a young lady by the name of Rosalee Mills Appleby, who later graduated from OBU in 1920. Her life and calling as a missionary, writer and teacher in Brazil set a pattern that continues today, young people called to ministry and missions at Falls Creek and then preparing for life service to Christ at OBU. Her life made such an impact that OBU’s oldest and highest honor for female students – the Rosalee Mills Appleby Award – is still given to this day. Hundreds of OBU students have also made an impact as summer staff at Falls Creek for generation upon generation.”

“Another person who has linked OBU and Falls Creek together for nearly a quarter century is Dr. Anthony Jordan. When I was preparing to come to OBU as president, Dr. Bob Agee urged me to partner with Dr. Jordan in our shared missions. He has become a good friend, and has been a strong supporter of OBU. Together, we have had a great working relationship. Furthermore, Dr. Jordan has been a servant to Oklahoma Baptists and to Southern Baptists alike. As such, it is a tremendous privilege and honor to award the Herschel H. Hobbs Award for Distinguished Denominational Service to Dr. Anthony Jordan.”

Jordan was surprised and grateful to receive this recognition.

“I was totally caught off guard with the presentation of this prestigious award,” he said. “I am both humbled and honored to receive it. Herschel Hobbs is one of my heroes of the faith. OBU is our Baptist University in Oklahoma, and to be recognized by our school means more to me than words can convey. I love our denomination, and it is a joy to serve our Lord and Southern Baptists. Thank you, Dr. Whitlock, for this wonderful affirmation of my life’s work.”

Prior to his service with the Baptist General Convention of Oklahoma, Jordan served as a pastor for more than 28 years. He has served as the Executive Director-Treasurer of the BGCO since 1996. He is a graduate of Southwest Baptist University, where he earned a Bachelor of Arts. He then earned both a Master of Divinity and a Doctor of Ministry from New Orleans Baptist Theological Seminary. OBU presented Jordan with an honorary Doctor of Divinity in 2010.