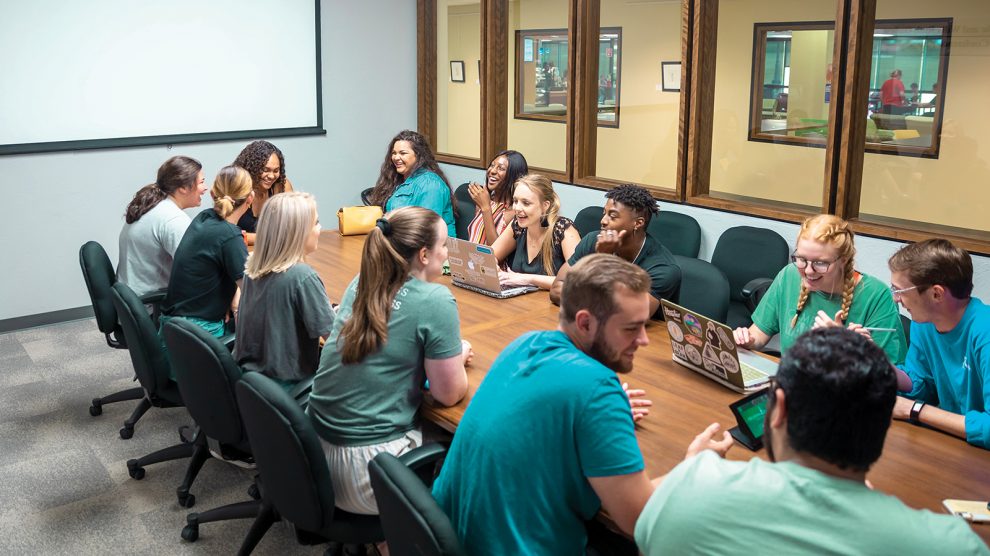 Last fall the University relocated the offices of Student Life and Spiritual Life to a central location on the first floor of the Geiger Center, moving into the newly renovated Dick and Sue Rader Office of Student Life and Women of Vision Center for Spiritual Life. As part of this renovation, members of the Garlow family, longtime supporters of OBU, generously gave to create the Drs. Lyle and Willa Ruth Garlow Conference Room. The Garlow’s children, Warren and Dawne (Garlow) Pybas, ’73; and Sam, ’76, and Becky (Vickrey) Garlow, ’76; and grandchildren, provided the gift in memory of Drs. Lyle, ’50, and Willa Ruth Garlow, ’50, who were deeply invested in OBU as students and throughout their lives of service to Oklahoma Baptists and beyond.

“OBU’s mission to transform lives was important to them,” Sam Garlow said, “and this conference room, in the heart of OBU’s Student Life Center, honors their love, commitment and service to OBU. Our parents clearly recognized the impact OBU had on them, their family, and the world. Both Lyle and Willa Ruth had a heart for missions and had multiple opportunities for international service. Throughout their lives, they experienced firsthand the impact of OBU across our state, our nation and our world by preparing laypeople, pastors, church staff and missionaries for lives of service to Christ.”

DR. LYLE GARLOW graduated from Southwestern Baptist Theological Seminary and served as pastor of four Oklahoma Baptist churches. He served 14 years in the religious education department of the Baptist General Convention of Oklahoma followed by 21 years of service as the associate executive director. He held positions of program director at Falls Creek youth summer camps, president of the Southern Baptist Stewardship Commission and organizer of many international mission works on four continents. After retirement, he worked with the Baptist Foundation of Oklahoma and served as the administrator of the Association of Southern Baptist Foundations.

He was awarded OBU’s Alumni Achievement Award in 1991 and an honorary Doctor of Divinity in 1992.

DR. WILLA RUTH GARLOW was a motivational speaker, early childhood education specialist and author. She wrote curriculum materials and articles for LifeWay publications and various other magazines and periodicals. She also wrote devotional materials for Oklahoma Baptist Village Communities. She traveled the world, speaking in Europe, Asia, Africa, South America and throughout the United States. She served on local church staffs as minister to preschoolers and children and served on the BGCO Board of Directors from 2009-12.

She received OBU’s Alumni Achievement Award in 1980 and an honorary Doctor of Religious Education in 2014. She delivered the address at OBU’s 2012 Winter Commencement.

In 2018, a gift from Lyle and Will Ruth Garlow established the Lyle and Willa Ruth Garlow Early Education Scholarship Fund for Church Vocation Studies at OBU. The impact of their lives will continue through this endowed scholarship.