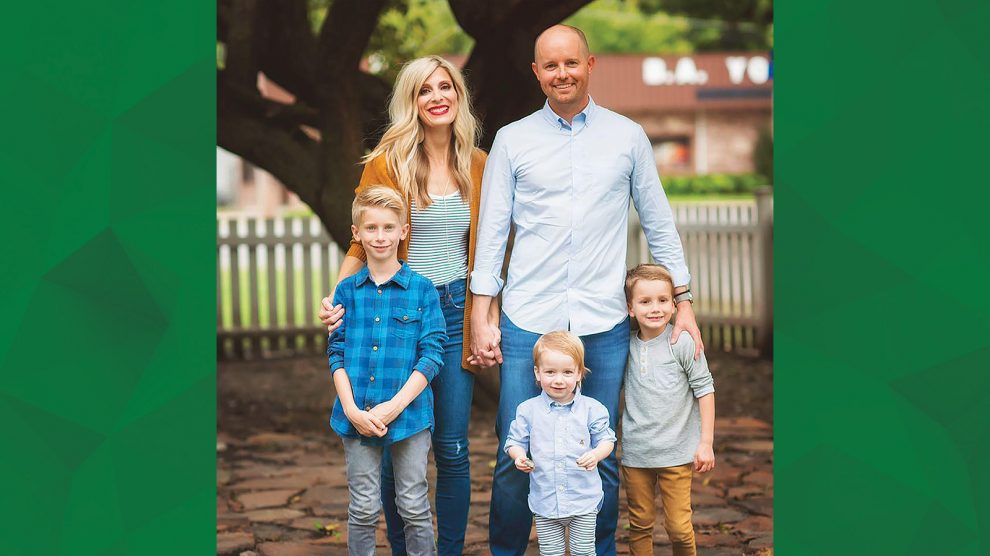 When Bryan Wilks came to Bison Hill as a student, he was already extremely familiar with campus. Since his father was an OBU professor and his mother was active around campus, Wilks spent a lot of time attending chapel and hanging out with students before he was even a student.

By age 10, Wilks was an unofficial member of a male social club, towel boy for OBU’s basketball team and even regularly attended chapel with students. To him, OBU was home.

“I enjoyed being around my parents and the students,” Wilks said. “They were my best friends, so attending OBU for college meant I could spend more time with them. I look back with great thanks that God let me spend those college years near my parents. It was a place and time where we were all healthy and happy.”

When asked about professors who greatly impacted him during his time on Bison Hill, Wilks mentioned one very important professor, his father.

“My dad and hero Dr. Tom Wilks,” Wilks said. “I don’t say that just because he’s my dad. This is a man I know better than anyone. Like so many others, he greatly impacted how I see the world. I learned that his faith was much deeper than his religion. He always focused on the relationship first. I took many of his classes my freshman year and instead of memorization and methodologies, he taught us how to love people.”

As the co-founder of Freeform, a technology and marketing company, Wilks has enjoyed how much OBU prepared him as a young entrepreneur. The company, founded in 2013, has experienced tremendous growth. In 2016, Inc. Magazine ranked Freeform the 456th fastest growing company in America and 2nd in Oklahoma.

“Apple didn’t invent the computer, but the company developed its own version that made the device simple and approachable for everyone,” Wilks said. “Following this idea, we saw an opportunity to make growth simple for everyone. As a result, in 2019 Freeform launched a product with the goal of replacing cumbersome and ineffective marketing technology with pure and simple growth. We call it ProfitHack.”

Wilks and his team created this product with their customers in mind. ProfitHack has allowed users to launch impressive marketing campaigns and has even been nicknamed the QuickBooks of marketing by its users.

Before Freeform, Wilks graduated from the Leadership Institute in Washington, D.C. He then earned a Master of Business Administration from Stanford Graduate School of Business. Silicon Valley inspired him to focus on furthering his technology education. Finally, Wilks earned his master’s degree in information technology with honors from Harvard University.

Wilks began his professional career in politics. He managed a high-profile congressional campaign in Texas, assisted U.S. House Majority Leader Dick Armey during Contract With America and served as the Executive Director of the Conservative Leadership Political Action Committee in Washington, D.C.

In the past decade, his experience spanned from manufacturing, entertainment, technology and advanced consumer marketing. Wilks served as the vice president of business development and director of marketing for two of the largest privately held companies in North America. Under his leadership, his teams implemented significant growth strategies through new market penetration, mergers and acquisitions, and industry roll-ups.

When asked about his success, Wilks credited OBU for giving him confidence when pursuing his goals.

“It was at Bison Hill that I decided to change my corner of the world,” Wilks said. “As college students, we have in common hard days, doubt, uncertainty, insecurity and people who say we can’t. We tend to believe others are smarter or more equipped. However, at OBU you aren’t a number. People invest the time and effort needed to help you overcome those doubts. This environment prepared me as an entrepreneur to safely explore, take chances and be different.”

Even though Wilks has had tremendous success in his career, he always looks back to his time at OBU and is thankful for the memories.

“Every time I see Raley Chapel I think about my mom,” Wilks said. “She was among the first women to be a guest speaker at OBU chapel. She inspired students and led many to a personal relationship with Jesus. A long way for a girl raised in a poor home by a single mom. Bison Hill is certainly more than a place of academic excellence for the Wilks, it’s where some of our greatest family memories and accomplishments live.”

Following the Call to Treat Business as Mission