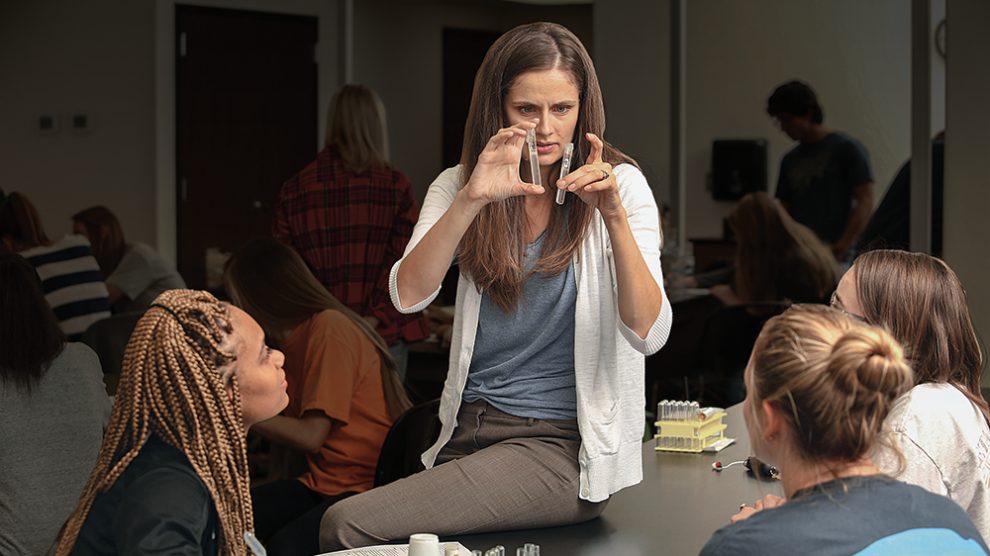 Dr. Contessa Edgar, assistant professor of biology, is no stranger to awards. Named the 2015 recipient of OBU’s Promising Teacher Award, Edgar also received the 2014 Student Government Association’s “Seven Who Care” award. In 2002-03, she was named a Barry M. Goldwater scholar. While she is humbled and grateful for the recognition, if it were up to her, these awards would go to others: to those who have supported and encouraged her, to those who have mentored her, and to those who have impacted her first, so she may in turn impact her students.

Edgar was born in Minnesota and grew up in South Dakota, where she graduated high school in Watertown and met her husband, Jeremy. She attended the University of Sioux Falls, a Baptist university, where she earned a Bachelor of Science in biology and chemistry, while he attended South Dakota School of Mines and Technology.

“At the end of graduate school, we started looking for the next step,” she said. “We prayed a lot about it and then a series of events opened the door for a move to Oklahoma.”

Jeremy accepted a position as a metallurgical engineer at Tinker Air Force Base and Contessa took a position as an associate research scientist at the Oklahoma Medical Research Foundation in Oklahoma City. While there, she worked with Darise Farris, Ph.D., who was her mentor, and became acquainted with Dr. Judith James, an OBU alumna.

“I love science,” she said. “I love understanding a specific molecular system and how that works together.

My position at OMRF intrigued me, but it wasn’t a perfect fit for me. I didn’t seem to relish the thrill of discovery like other researchers did. You need that to thrive in a research environment.”

While working at OMRF, Edgar took a “preparing future faculty” course at the University of Oklahoma, a suggestion made by Farris and James. Through that course, she had the opportunity to guest lecture at OBU, OU and Southern Nazarene University.

Edgar began on Bison Hill as an assistant professor of biology in August 2012. She currently teaches human anatomy, human physiology, introduction to cell biology, and cornerstones of science. Many of her students are nursing majors, as well as kinesiology and science majors. She also mentors honors students.

“My students are some of the sweetest people I’ve ever met,” she said. “I love getting to know them, and I constantly feed off their passion for their careers and what God is calling them to do. They are my favorite part of the job.”

Edgar has a clear vision for what she wants her students to experience and learn.

“I want them to appreciate the beauty and complexity of the human body that God has given us,” she said. “I want to share with them my sense of awe about how God’s design is apparent in science. I’ve met my goal for the day if I see a look of amazement on their faces when I explain some physiological process. I want them to be on fire for God and for physiology.”

She became a Christian as a child and was baptized at age 8. Raised in a Christian home, she learned from her parents’ example how to serve Christ and follow Him. As an undergraduate student, she thrived in the Christian university environment and learned valuable lessons moving from that environment to a secular graduate school…lessons she passes on to her students.

“The challenge was learning to articulate my faith in a way that challenged people without offending them,” she said. “That’s something I try to prepare my students for, especially the upperclassmen. I tell them that life is going to be different when they graduate, and I challenge them to think about how they will deal with that. They have to rely on the foundation they’ve already built.”

She expressed gratitude to fellow faculty members Dr. Tony Yates, associate professor of science, and Dr. Brad Jett, James E. Hurley professor of biology, and to Dean Debbie Bosch, who befriended her and mentored her as a new teacher.

“Anything good I do in the classroom is because of the examples they set for me,” she said.

She has also found inspiration in her daughter, Gwendolyn, born in May 2014.

“Becoming a parent has been a good lesson in understanding unconditional love. Parenting teaches you how to be selfless, as well as many spiritual disciplines and why they are important,” she said.

Away from Bison Hill, she leads AWANAs at First Southern Baptist in Del City with a group of third through fifth grade girls each Wednesday night and has volunteered in Whiz Kids, a remedial reading program for underprivileged children in Oklahoma City. This summer, she plans to take her first GO Trip, to Belize, where she and science students will teach science classes to children, shadow in a clinic, and tour a medical school.

Hanging on her office wall is a print of a scientist and apprentice. As they experiment and explore, and struggle to learn and to solve, the joy is apparent on the mentor’s face, as the pupil grows in wisdom and understanding. So it is with Edgar. A gifted researcher and accomplished biologist, she delights most in the learning and understanding of her pupils, not for her own benefit, but for their future success.