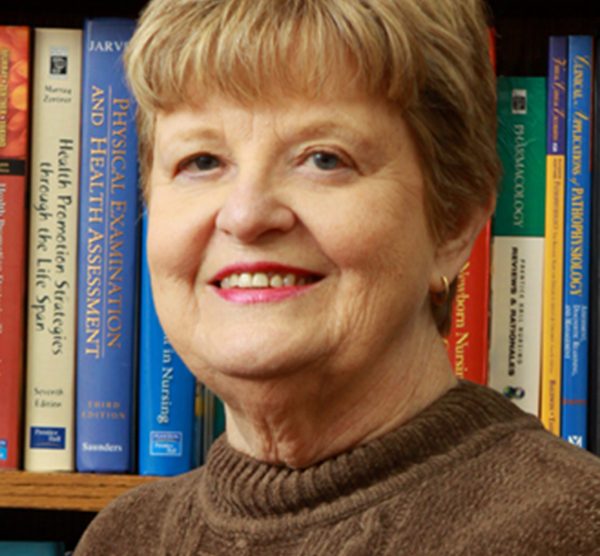 The Faculty Hall of Fame recognition program honors legendary faculty members who were master teachers that made a significant impact on OBU students. The first class was inducted in November 2010 during the University’s centennial homecoming. Any OBU community member may nominate potential Faculty Hall of Fame inductees.

She has served OBU as a professor of nursing, as dean of the College of Nursing, and as an adjunct professor in the Master of Science in Nursing program at OBU. She has also served in numerous roles outside OBU, including clinical assistant professor of nursing at the University of Oklahoma College of Nursing and assistant for career development at Presbyterian Hospital. She published “What is Career Mobility?” in the Oklahoma Nurse newspaper, and received the Outstanding Young Women of America award in 1973.

One of her nominators commented on her teaching expertise, by saying, “As a master teacher, Claudine made difficult concepts understandable. Dr. Dickey’s expertise in the subject matter was demonstrated in the classroom and the clinical setting. In addition to nursing students, the nursing staff and physicians had great respect for her knowledge base and her clinical expertise.”

Dr. Ronda Hall served as professor of Spanish at OBU from 1973-2011. Prior to her time at OBU, she served as a missionary journeyman for the Foreign Mission Board of the Southern Baptist Convention. She is married to Joe Hall.

She has attended numerous universities and colleges to further her education, even attending universities in Spain and Mexico. She earned a bachelor’s degree from Samford University, a Master of Arts from the University of Alabama and a Ph.D. from Oklahoma State University. She was involved in the American Association of Teachers of Spanish and Portuguese and the Oklahoma Foreign Language Teacher’s Association, among others. In 1980, she received OBU’s Distinguished Teaching Award.

One of her nominators, a previous student, said, “Dr. Hall was influential in me choosing Spanish as a major. I loved Spanish before I attended OBU, but in her classes, I couldn’t soak up enough of her stories about living in Spain and the food and the people and all the things she did and saw there. I was privileged to be a student worker for Dr. Hall and enjoyed the time I got to sit with her in her office and visit with her.”

Dr. Jimmie Russell served as professor of education at OBU from 1981-2002. She passed away in 2002 at the age of 52. She is survived by her husband, Dr. Norris Russell, OBU professor and chair of the Division of Kinesiology and Leisure Studies, and two children, Jeremy and Meredith.

She graduated from the University of Houston with a bachelor’s degree in education. She then earned a Master of Education from East Texas State University and later went on to earn a Doctor of Education from Oklahoma State University. She was highly involved in the educational system of Oklahoma and was a member of numerous educational organizations such as the Oklahoma Teachers Applying Whole Language and the Oklahoma Reading Council. She loved to read and fostered this love for reading among her students. In the winter of 1990, she published an article titled “Underestimating Capable Readers.”

One nominator, a colleague at OBU, said, “She [Dr. Russell] showed a huge interest in her students while they were at OBU, and after they graduated and moved on to new endeavors. She was always seeking ways to improve her teaching in an effort to improve the students she mentored at OBU.”