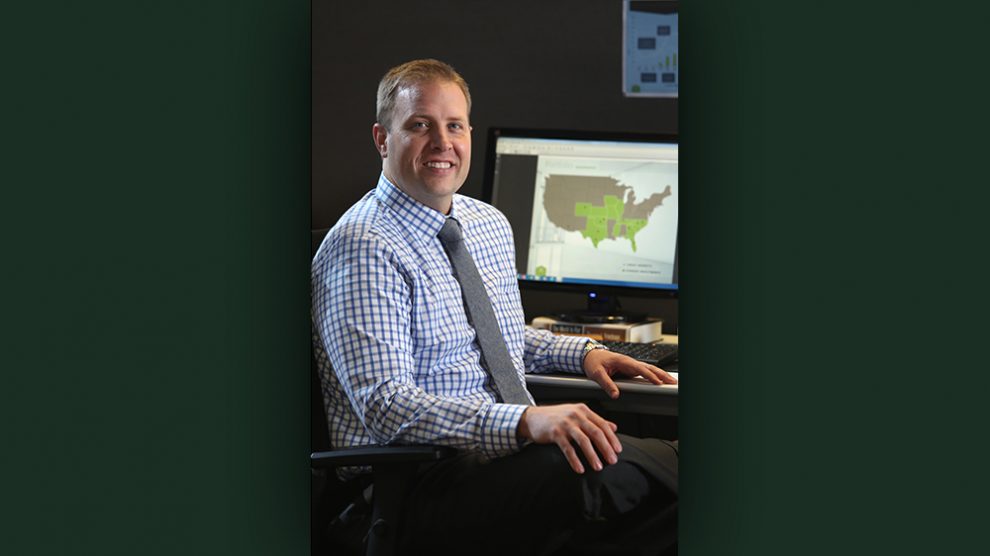 When you meet  Ben Stewart, you are immediately at ease. A kind word, a caring smile and a focus solely on you. Genuine. Authentic. Sincere. Qualities that seem to come naturally, yet, qualities that were refined through relationships forged on Bison Hill.

Stewart grew up in Hollis, Oklahoma, a small town in the far southwestern corner of the state. When it came time to consider college, his older sister, Melanie Stewart Maxwell, ’98, was Bison Hill bound. He decided to give OBU a look.

“My sister was one year ahead of me, and her decision to come to OBU prompted me to consider the school for myself. A few campus visits later, I was hooked.” His younger sister, Stephanie Stewart Hill, ’05, also followed her siblings to Bison Hill.

Stewart majored in business with a finance emphasis and minored in religion. He credits the impact of Drs. Warren McWilliams, Mack Roark and Bill Tanner in his religion courses, and Dr. Roger Flint in accounting. Yet, there was one professor whose impact stood out above all others.

“Dr. Dan Reeder was the best college professor I ever had. He showed interest in his students’ lives and made it fun to learn. He peppered us with questions as a means of getting to know us, and there was hardly time for us to get to know him. So now when I talk to him, I try to open the conversation by prying into his life a little because I know he won’t allow time if I don’t.”

Stewart built other lasting relationships on Bison Hill as well. He fondly recalls the bonds formed with friends and meeting the love of his life, his wife, Jeannie McMains, ‘02.

“I met many of my closest and lifelong friends at OBU, the ones who would be there for me in both the triumphs and the darkest hours of life.”

He credits the unique combination of finance with a religion minor for opening doors that led his career where it is today. Following graduation, he worked as the investment analyst for the Baptist Foundation of Oklahoma, where he spent nearly a decade learning institutional investment management. He also earned an MBA from the University of Oklahoma, and in 2008, began a six-year span as director of investments at the OU Foundation. In that role, he managed roughly $1.5 billion in assets and helped build the investment office and portfolio from the ground up, and they saw the Foundation’s investment returns climb to the top of annual peer rankings.

In January 2015, he transitioned into his current role as the managing director of investor relations at The Humphreys Fund in Oklahoma City, a private real estate investment fund founded by former Oklahoma City Mayor Kirk Humphreys. It is a diversified, income-producing, multi-sector real estate fund with approximately $200 million in assets across 13 states.

“Institutional investors must have an incredibly long-term focus. Having the confidence, conviction, patience, and sometimes faith to make decisions from which you will not see fruit for several years is difficult. Working with people, earning their trust, and being shown grace when you are wrong is a challenging, humbling, and yet incredible opportunity.”

Stewart credits the relationships with his professors and the small class sizes as two distinct advantages of his OBU education. “I remember once during my first semester of graduate school, I was working on a group project when we began discussing who would present to the class. No one else was willing and some were terrified at the thought of standing in front of 50 people to speak on behalf of the group. I soon realized most of them had never once stood to speak in front of a class or large group. On the contrary, I had spoken dozens of times at OBU, from one-minute speeches to senior capstone presentations.”

This fall, Stewart returned to Bison Hill to deliver a business forum address, speaking to students who sat in the same seats he occupied not that long ago. He challenged them to build their lives and careers on the right priorities with an eternal perspective. He told them to focus on four key areas in order to succeed in both their professional and personal lives: People, Process, Portfolio and Performance.

“Focus on the first three ‘P’s’ and the Performance will take care of itself,” he said.

“The relationships you are building right now are the ones that will last a lifetime.“

”Make sure your friends’ eternal values are similar to yours, as they are the ones who are going to be your anchor when things aren’t going well.”

Stewart’s advice was born from experience. In 2013, he lost his nearly three-month-old son, Toby, to a rare immune deficiency disease known as “bubble boy disease.” He also lost his mother-in-law and his seven-year-old nephew, all three in a span of 85 emotionally draining days. It was during this time he leaned heavily on the friendships forged on Bison Hill.

“As incredibly difficult as that was and still is, we experienced the Holy Spirit’s sustaining power and guidance while putting one foot in front of the other to return to life’s activities, demands and even positions of leadership,” he said.

Stewart recalled that in the days and weeks following Toby’s death, they saw God work in many ways, with others coming to a saving faith in Christ and still others gaining the courage necessary to face trials in their own lives, inspired by how God was working to heal and sustain his family.

“Losing a child causes you to have an eternal perspective in a way you didn’t have before. You literally have to place your hope in the eternal hope found in Christ. That’s the only thing you have to hold on to when you’re in the middle of extreme grief for yourself, your spouse and your other children, while also trying to be a husband and parent.”

Stewart values his family tremendously, and the grief process taught them all to value each day and to focus on the right things. It also increased his passion for discipleship.

“One of my highest priorities is discipling others. Jeannie and I lead a Sunday School class for young adults. I also enjoy and count it an honor to lead men through a discipleship study called One-on-One with God. I’ve had the privilege of leading groups at work, over the kitchen table, and at church. These small, accountable, transparent groups are where I benefit by seeing true spiritual growth happen day-in and day-out…in the hearts of the men I’m leading, and in mine as well.”

Through it all, Stewart thinks fondly of his four years on Bison Hill. “OBU is such a special place. The opportunity to learn and grow, and be shaped and molded by Christian administrators and faculty, was an opportunity for which I will be eternally grateful. OBU is a tremendous steward of young peoples’ futures and worldviews.”

Ben and his wife Jeannie reside in Newcastle, Oklahoma, along with their children, Haley, Courtney and Brady. They are active at First Baptist Church, Newcastle, where he teaches Sunday School, serves as a deacon and on the finance team, and coaches Upward Basketball.