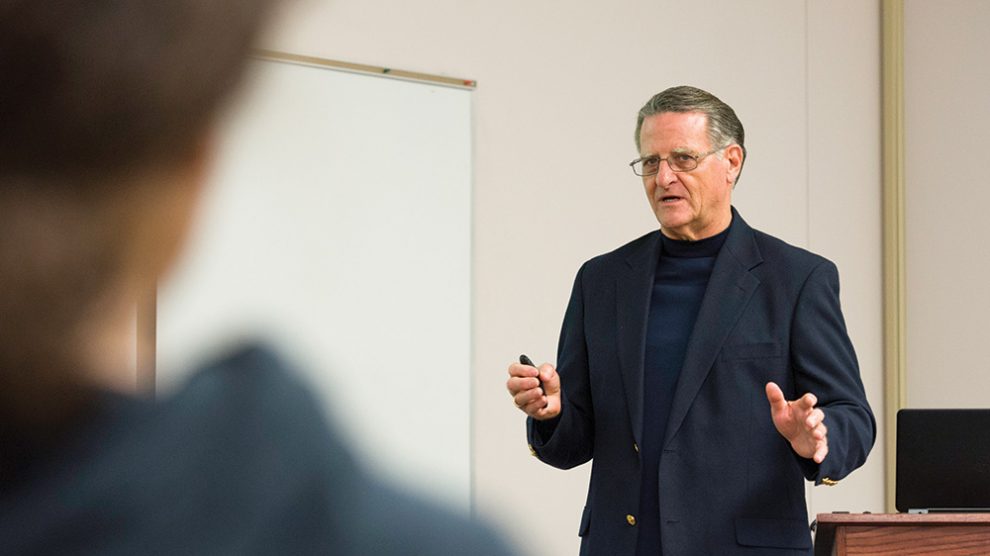 Dr. John Cragin earned a Bachelor of Arts in social psychology with a minor in Bible in 1969. A few years following graduation, he and his wife moved to Asia to pursue business opportunities there.

“While we were there, I realized where my skill sets were and we decided we wanted to do some things in a part of the world that was, at that point, unreached with the Gospel,” Cragin said.

In order to achieve that goal, Cragin decided to pursue another degree and returned to Oklahoma to earn his Ph.D. in Management with an emphasis on international business and China-U.S. relations at the University of Oklahoma.

“I started my business in Hong Kong and then in 25 other countries,” he said. “After about ten years, an opportunity arose for me to come back to the states and pass some of that knowledge and experience along.”

Back in the United States, Cragin returned to OBU in 1990 to teach in the Paul Dickinson College of Business. Since that time, he went from teaching to business and back again two times, once to head the international department for a manufacturing firm and once to start a company specializing in virtual reality training and education.

The transitions were seamless for Cragin because he always focuses on helping the people around him.

“All along you are trying to develop other people. Whether you are in business and you have employees that report to you or you are at a university and have students in classes, you are basically discipling them and teaching them to make an impact,” Cragin said. “It’s not that big of a change. The difference is university students at the undergraduate level generally don’t have much experience, and they don’t have much on the line yet. But the goal is still the same, so it was a natural transition.”

Because of Cragin’s first-hand experience starting and running businesses with a kingdom mind-set, Dr. David Houghton, dean of the Paul Dickinson College of Business and professor of business, asked Cragin to return in 2014 to teach some of the social entrepreneurship classes. In those classes, Cragin looks for students who have enough passion and commitment to impact others for a higher purpose while conducting business in the marketplace.

“What I look for in the very first social entrepreneurship class are students who have a real heart-felt compulsion for this path along with enough talent to accomplish the degree,” Cragin said. “If I find students like that, then I challenge them to do it. Not to study it, but to do it. I like to see them develop a social enterprise that they put into practice when they leave here. Not three or five years later, but when they leave here. That’s what I really like to challenge them to do. But not everyone is able to do that.”

There are many challenges that a social entrepreneur will face along the road, but Cragin does his best to prepare his students to overcome such obstacles.

“It is extremely challenging to do social entrepreneurship right,” he said. “Many businesses fail very quickly. Others end up doing more harm than good. We put it this way: do as much good as possible with the least harm possible for the most stakeholders possible for as long as possible.”

Cragin views failure as a natural part of the process of starting a business because it’s an opportunity to learn. To him, the acceptance of failure is what sets social entrepreneurs apart from other business professionals.

“It’s a different deal to go out on your own and do your own thing,” he said. “It’s a very small percentage of people who have the capability and fortitude that it takes to fail and fail and fail. But this is the nature of starting a business. A vast majority of them fail and that’s okay. You learn as you go.  If you are an entrepreneur, failure doesn’t bother you a bit. You just get up and keep going. But most people can’t do that. Most people look around for something that’s less likely to result in failure. It’s a challenging major.”

Cragin believes there are certain skills and traits necessary to become a successful entrepreneur.

“It takes confidence in yourself and a belief that what you are doing will work. Although you know it might not work, you need to believe that it will. It takes an absolute unwillingness to give up,” he said.

“Many say that entrepreneurs are supposed to be risk takers and risk seekers, but I don’t think that’s the case. I think entrepreneurs tend to be very willing to evaluate risk, to understand risk and to recognize risk. They don’t ignore risk and they don’t pursue it
willy-nilly. They say, ‘That mountain looks tough to climb, but I think I can climb it.’ And they go out and do it.”

For Cragin, the reason he teaches is because of the students he impacts and the results of their efforts, not because of the subject matter, the research or the publishing.