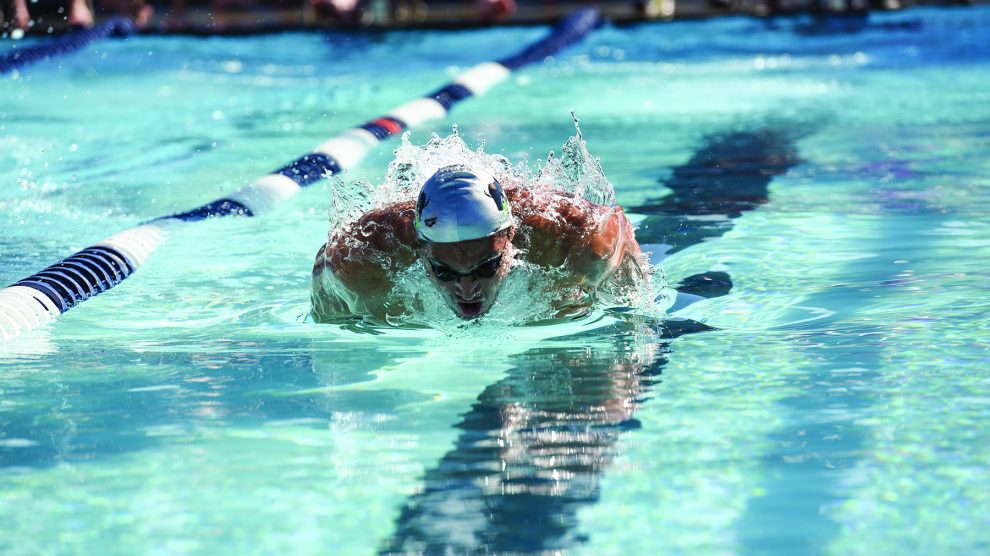 The season saw new rivalries established and old rivalries reborn. Building upon decades of dominance in the NAIA, the Bison continued their  winning ways, claiming national championships and regional titles, leading the conference in victories, qualifying for national tournaments, and growing through the challenges.

Ford Mastin, head track coach, was thrilled with the performance of his teams but also touched by the support they received at the national meet.

“We counted 24 families that traveled to Marion, Indiana, for the indoor national meet to support their children,” he said. “It’s easy to see why our student-athletes behave so well, are consistent witnesses for Christ and are good ambassadors for OBU. They have loyal, committed parents that model wonderful behavior.”

“Records were set during the indoor meet on a small, indoor track with no banks…record times that our guys had never run, not even on the oversize tracks where faster times are expected. Their performances truly were impressive. Our behavior at the meet was also the kind that added to the Christian atmosphere that was expected. This was a great weekend in the history of OBU Track and Field.”

OBU finished a successful first season in the Great American Conference and placed third in the NCCAA national tournament.

Picked ninth in the regular season coaches’ poll, the Lady Bison finished 12-10 in the GAC and advanced to the NCCAA postseason.

After a runner-up finish in the Central Region, the Lady Bison lost in the semifinals of the national tournament and won the third-place game. OBU lost to Colorado Christian in both the regional finals and the national semifinals. The Lady Bison scored postseason wins over Southwestern Christian, Point University and Northwestern Minnesota.

The Lady Bison ended the season at 17-16 and with numerous awards. Arielle Cooper earned Second-Team All-GAC with McKenzie Cooper earning honorable mention, while both of them joined Tasha Edge on the All-NCCAA Central Region squad. Additionally, Kiara Moore and Edge earned GAC Player of the Week honors this season.

Coach Peter McCorkle’s squads both clinched titles at the NCCAA Central Region Championship in Abilene, Texas, in late April. The victories qualified both the men’s and women’s teams to compete in the NCCAA national championship in Mobile, Alabama, May 10-13.

The women’s team progressed to the finals before losing to top-seeded Indiana Wesleyan. An historic year for OBU women’s tennis, the team set a record with 23 wins and went unbeaten through the Great American Conference for a regular season title in their first year as a provisional NCAA Division II member.

The Lady Bison have earned numerous honors, including Olivia Charvat and Anastasiya Baranova as Great American Conference Players of the Week, and Baranova, Madeleine Boepple and Kateryna Shkot picking up NCCAA Player of the Week honors.

Ending its season in the NCCAA semifinals, the men’s team finished 18-9. Reda Jirari earned both GAC and NCCAA Player of the Week honors and Thomas Ackerknecht and Lucas Castelo Branco also earned honors from the NCCAA.

OBU won the combined title as well as the men’s title at the Speed Central Zone Sectional at Jenks High School Aquatic Center in March.

OBU posted 110 points in the final event, the 400-medley relay, to capture the combined title. The men’s team claimed their title with 325 points. The OBU women were 11th with 85 points.

Since its launch in 2011, the OBU swimming and diving program and Head Coach Sam Freas have amassed seven national titles in just five years for both men and women, breaking 28 national records. Beyond team success, more than 250 swimmers and divers have earned All-America or Academic All-America designations. Swimmers have participated in the Olympic Games, Pan-American Games, World Championships, and other hemispheric championships while attending OBU.

“What has happened at OBU in terms of swimming and diving is unprecedented in collegiate athletics,” said Dr. David W. Whitlock, OBU president. “As a result, numerous individuals, corporations, and organizations have inquired about helping OBU establish a permanent home for this outstanding athletic program.”

In response to these requests, preliminary plans were developed for a facility that will include a 50-meter pool (Olympic distance) by 25 yards (collegiate competitive distance) with Olympic-standard diving boards and platforms (10-, 7-, and 5-meter platforms, two 3-meter boards, and two 1-meter boards) as well as a therapy pool. The projected location for the facility will be on the north side of MacArthur.

“Such a facility will have the capacity to host national, regional and local events,” Freas added. “The facility will also be able to accommodate sports like water polo and synchronized swimming in the future. The void created by the closing of the natatorium at Oklahoma City Community College provides additional inducement for having a facility that will cater to the needs of students, faculty, staff and athletes as well as the local community and region.”

Additionally, a natatorium on the OBU campus has great potential for economic generation for Shawnee, the county and the state. As an indoor facility, the pool will expand the opportunities the local community currently has in the YMCA and the outdoor city pool located in Shawnee’s Veterans’ Park.

“We are blessed to have corporations, organizations and individuals who are reaching out to us and seeking a way to make this happen. With that support coming in unsolicited, and with the success of the swimming and diving programs, we realized that this is a worthy project for us to undertake,” said Dr. Will Smallwood, senior vice president for advancement and university relations.

Designated funding to assist with construction is encouraged with naming opportunities available. For inquiries and/or gifts please contact the Office of University Advancement at development@okbu.edu or 405. 585.5412.

The Bison baseball team hosted and won the NCCAA Central Region tournament May 21, defeating Oklahoma Wesleyan 6-2 and claiming a trip to the NCCAA World Series.

The Bison held their competition to 38 consecutive scoreless innings going into the top of the eighth inning, when Oklahoma Wesleyan’s Alejandro Hernandez belted a two-run home run.

Carson McPherson got the win, going 7.2 innings, striking out 10 and allowing one run. Brad Adams yielded one run in picking up his third save.

At press time, the Bison were set to begin World Series play May 25 in Mason, Ohio, against Toccoa Falls College. The 10 team tournament consisted of two five team pools, with the top two teams from each pool advancing to the semifinals.

After playing Toccoa Falls, OBU took on Oakland City. They then completed pool play with games against both Hiwassee and Judson. Results were not available at press time.

The Bison closed the regular season with a 33-15 record and a 22-11 mark in the Great American Conference, tying them for the lead in conference wins. Brandon Cuddy led the Bison with a .385 batting average and 49 RBI, while Ryan Joyce had 11 home runs.

Nathan Thompson led the GAC with 87 strikeouts and threw a complete-game no-hitter with 16 K’s against McMurry during the Central Regional. Jinny Parra finished the season at 8-3 with a 2.59 ERA and McPherson went 5-2 with a 2.97 ERA.