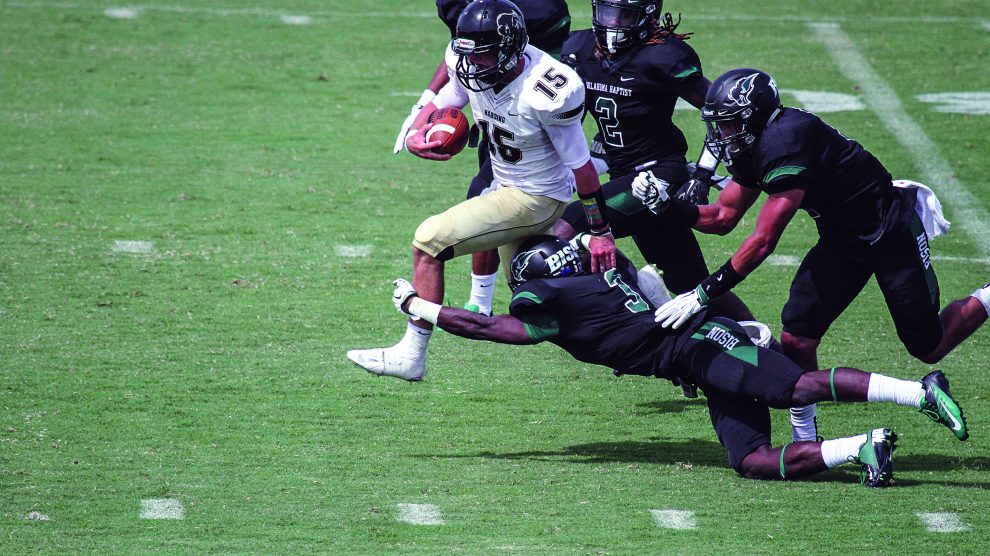 This fall, OBU advanced to the third year of NCAA Division II candidacy, the final year before consideration for full membership in the NCAA and the Great American Conference.

OBU is competing this fall in its second year against NCAA Division II opponents. The team is a little bit wiser, a lot more experienced and ready to improve.

“I’d say that we definitely figured out what we need to do to be more competitive in the NCAA level,” said OBU Coach Chris Jensen. “We know we have to improve our depth up front. You play five starters, but you need to have at least nine guys you’re comfortable playing. Last year we were closer to seven. Same thing is true on the defensive line.”

Despite those needs last season, OBU played more competitively than the 2-9 record in 2015 indicated. The Bison lost two overtime games and three others were two-score games.

Quarterback play might be improved this year by younger players able to push returning starter Dez Stegall, who led the team last year in passing and rushing.

“It’s shaping up,” Jensen said. “We only had two quarterbacks on campus in the spring. Both did an outstanding job in how they’ve progressed. Grant Gower has had a huge impact as a quarterback coach. We’ve got some young guys on campus who, just by their athletic ability, will be able to compete for the job and that’s good for the program.”

A two-horse race has developed for the running back spot with Dawson Myers and Isaiah Mallory both returning. The team has also added some size at the tight end position this year, giving the Bison offense more options.

The receiver corps will, for the first time, be without deep threat Derek Serowski.

“We have some great possession receivers who can make something happen after the catch.” Jensen said. “I’m really excited about the progress and the way they developed over the summer. They’re ready.”

The defensive backs are loaded with speed and experience. Safeties D’Ante Meeking and Erik Derrow return with solid experience and talent.

“I think we’ll be much improved over last year,” said Jensen. “There’s no control over outcomes, but you can control how you prepare. What I’ve seen so far in preseason, I think our players have taken it to another level in preparation. I think we’re doing it the right way and hopefully it will pay dividends.”

The Bison were ranked 10th in the GAC preseason coaches’ poll.

Coming off a season that saw them finish as runners-up in both the National Christian College Athletic Association (NCCAA) national tournament and Great American Conference, expectations are high for the Lady Bison Volleyball team heading into 2016. However, it’s a new crop of faces that will be expected to answer the challenge.

Oklahoma Baptist returns six student-athletes from last season’s squad, including two starters in Second Team NCCAA All-American Kynnedy Myers and Nicole Fleitman, a GAC Honorable Mention in 2015. Two seniors, Shekinnah Sharpe and Sierra VeraCruz, expect to see significant time on the floor after primarily appearing from the bench in 2015. They also will be tasked with teaching and guiding 11 new players, including eight freshmen, in what it means to compete for OBU.

“I think that their leadership is really strong,” Howle said. “This spring they really figured out what it meant to be the kind of team that we need to be in order to be successful.

“I think Shekinnah and Sierra are doing everything they can do as seniors. They lived in Shawnee this summer, and have been working out. They’ve been working extremely hard. They have the right mindset. Seniors in our program really understand what it is to step up and play and be successful. I think they’re both really ready for that.”

OBU placed both its cross-country teams in the NCCAA top five last year. A fine season to be sure, but both Matt Kennedy, women’s coach, and Mark Heard, men’s coach, are expecting a better season in 2016.

After establishing themselves as powers in the NAIA and Sooner Athletic Conference, the teams had to adjust last year to the NCAA and the Great American Conference.

“I think as far as the GAC, we learned what that level of competition was going to be like,” Kennedy said. “I thought we handled that competition pretty well.”

Heard added that the GAC was a tough conference for the men.

“The GAC is tough,” he said. “There are a lot of great distance programs in there. We prepared hard for it. I think our first exposure in the conference was a good one.”

The OBU men return a solid core, but one in need of veterans stepping into leadership and scoring roles.

“Jacob Janzen was 25th in the NCCAA last year overall and he’s our top guy coming back,” Heard said. “Blaine Whitson is really getting better and better. He did a fantastic job in outdoor track. I look forward to having him back. Nathan Crowson is a fantastic runner. Tommy Uglean has a lot more foot speed and we need him to be a team leader, being a senior.”

With Abby Hoover redshirting this season and the graduation of Miranda Dent, the Lady Bison lost their top two athletes.

“We lose our top two girls, but I think we are uniquely positioned to replace them,” Kennedy said. “We were young last year, but we’ll be even younger this year in the top seven. I anticipate Sydney Lawrence, who had a good indoor and outdoor season after she got her cross-country legs back, and Emily Sechrist, who was national champion outdoor in the steeple chase, will lead us as sophomores. Kaylee Large will be important to our success. We’ve always had great senior leadership, no matter where they rank on the depth chart, and I expect Lauren Franz, Emily Banks and Samantha Sweeney to lead the team this year.”

“They’re talented, they’re motivated, they work well together and they compete for each other and that’s a recipe for winning,” Kennedy said. “Our season ended with a little bit of a hiccup last year and we didn’t have the finish we wanted. I look for this team to be highly motivated and on a mission.”

Men’s Soccer Shoots to Top Spot in the GAC

Following a second-place finish in the Great American Conference in the regular season and at the conference tournament, the Bison look to top the summit in 2016. Head Coach Anthony Yousey returns a sizable core in his fourth year at the helm, including six of last year’s starters, and looks poised for a strong season in which they were picked for the top spot in the GAC preseason poll.

Both the reigning GAC Offensive Player of the Year, senior forward Vicente Castillo, and GAC Defensive Player of the Year, junior David Estrada, return for the Bison. Castillo led the league in scoring a season ago, bagging 12 goals, including four multi-goal matches, while also handing out a team-best six assists. Estrada marshalled the defense to two clean sheets and also knocked in one goal.

“Vicente Castillo is taking over as captain of the team this year, so we’re really looking for a lot of leadership out of him,” Yousey said. “David Estrada just brings so much experience to the game with his athletic ability and knowledge of the game. He really makes us strong in the back.”

With longtime starter and Second Team All-GAC keeper Marcus Oliveira now on the bench as a graduate assistant, the Bison will look to reload between the sticks this season. Leading that effort is Colin Spencer, a redshirt junior who saw action in the Great American Conference Tournament last year, collecting 14 saves and holding a .824 save percentage. Working alongside Spencer and pushing for playing time is local product Bronson Wise.

“I think the biggest key is for the guys to stay focused and take care of business on and off the field,” Yousey said. “We need to realize that we have a target on our back in our conference and show them who we are as a team.”

After finishing the 2015 season in sixth-place in the Great American Conference, OBU women’s soccer head coach Michael White reloaded the Lady Bison soccer program with 17 new players on the roster for the 2016 season.

However, the new additions to the squad will be able to count on an experienced core to help guide them through the rigors of life in Division II. The team returns six starters, including a pair of College Sports Information Directors of America (CoSIDA) First Team All-District honorees in senior goalkeeper Emma Beck and senior defender/midfielder Kenzi Bice.

“I expect my seniors to lead us into a much better season this year,” said White. “We have seniors in every area of the field. Markella Suka up top will be a handful to stop, while Kenzi Bice, Kierra Mattingly and Brenda Barnett are workhorses in the midfield. Kayla Kendall will anchor the backline, while Emma Beck will be the final wall for opponents. They are great leaders.

“I’m also excited about my freshmen, but if you don’t have good leaders in front of them, then it can be a rough year. I’ve got good solid returners though, and I’m thankful for them. They’ve been through a lot, and that experience will help them, and it’ll shine through this year.”

“There’s definitely the potential there to score, but it’ll be a team effort,” he said. “It won’t be one or two players doing all the scoring this year, there’ll be multiple people lighting up the scoreboard.”

Oklahoma Baptist closes out October, as well as GAC play, with three-straight home matches against East Central, SWOSU and Northwestern Oklahoma State. The last match, against Northwestern, is set for Oct. 29, and is OBU’s final home match of the year.

The last regular season tilt in 2016 is set for Nov. 3 in McPherson, Kansas, when the Lady Bison make a visit to Central Christian College.

OBU joined the Rocky Mountain Athletic Conference as an associate member in men’s and women’s swimming and diving for 2016-17.

The Bison, led by head coach Dr. Sam Freas, collected their first NAIA national title on the men’s side in their first year of competition in 2012, while the women’s team was national runner-up. This was the beginning of four straight national titles for the men and three straight women’s national titles after their inaugural season, totaling seven national championships in four years.

Although OBU is still transitioning into NCAA Division II, it will compete in the 2016-17 RMAC Championships. The Bison will look to take over California Baptist’s reign on RMAC Swimming and Diving, as the Lancers took home both men’s and women’s titles last campaign.