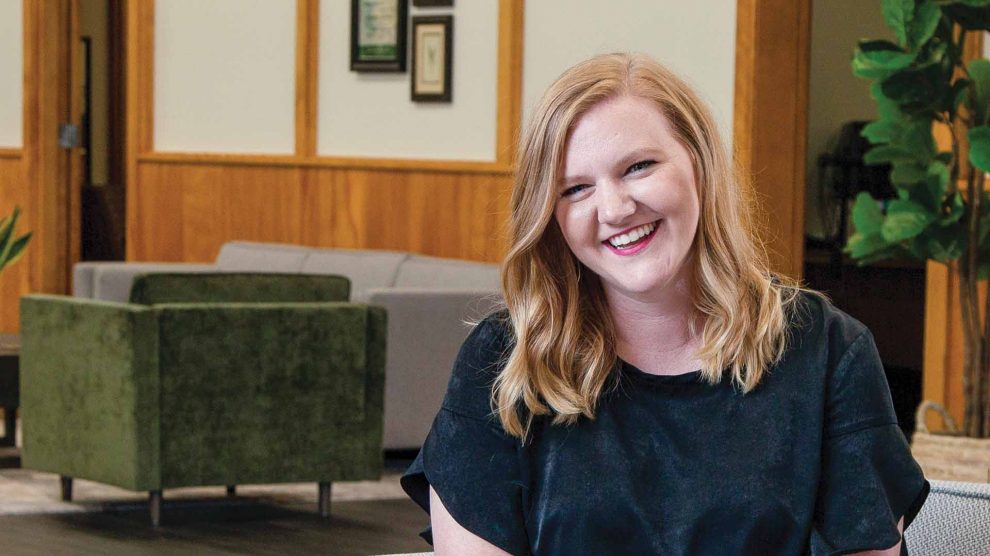 By returning to OBU for her career, alumna Kalyn Fullbright is helping countless others shape their futures and that of the world we all share.

Sometimes in life, when you know, you know. It really is as simple as that. And those moments of clarity and realization are as powerful as they are personal.

This is especially true when it comes to one’s education and future career path. Everyone’s path is unique. Most bring unexpected twists and turns, as well as a few surprises along the way.

For Kalyn Fullbright, ’15, the one thing she was sure about after graduating from high school was that OBU was the place she wanted to spend her college years. Everything else was a discovery waiting to happen. And in the end, it would lead her to a realization that would impact her life and countless others on their journey to a brighter future.

Fullbright grew up in Sallisaw, Oklahoma, just over two hours straight east from Shawnee. Knowing that any college she chose would have to provide an experience that integrated faith into the overall learning experience, she and her family made the drive west on Interstate 40 to visit OBU.

As they took in their surroundings while on campus, they noticed that they had fallen behind their tour group. But as it turned out, that was OK.

“My family and I came to a Preview Day during fall of my senior year,” Fullbright says. “During the event, we got a little behind and ended up talking to Dr. Bruce Perkins [director of admissions at that time] instead of going to a session. That conversation, along with many others that day, helped my parents feel confident in sending me to Bison Hill.”

While she would be going to college 127 miles away from her hometown, her family was confident that upon graduating Fullbright would return. “My whole family lives within about five miles of each other and they fully expected me to return after graduation,” she said.

But that story was yet to be written.

When Fullbright was deciding on a college, in addition to a school that would provide a robust Christian worldview as part of the experience, she also wanted to find a respected nursing program. It was her field of choice, and she was excited for a career healing others.

But as so often happens in life, that direction changed.

“I came to OBU for nursing. I just knew it would be a wonderful career and I would love every minute of it,” Fullbright said. “When it was time to enroll for my second semester, my advisor told me that I needed to enroll in human anatomy. She excitedly explained the benefits of OBU’s cadaver lab, which was one of only a few in the state, and the hands-on experience our students are exposed to.”

The thought of working with human cadavers was, in Fullbright’s words, “terrifying.” So she changed her major after her first year to pursue a bachelor’s degree in communication studies with a minor in marketing. But even then, she didn’t know where that new academic path would lead her.

Nothing Short of Life Changing

Thinking back on her time as a student at OBU brings one phrase to mind for Fullbright.

From her professors, to the friends she made her freshman year with whom she remains close to this day, to the celebrations and traditions she helped form, it all puts a smile on her face.

“Dr. Vickie Ellis [retired professor of communication arts] profoundly impacted me during my time as a college student,” Fullbright said. “Nobody challenged or supported me like she did. She is one of the most creative minds I have ever known. Nobody loves students, scholarship or Broadway show tunes more than Dr. Ellis! I also thoroughly appreciated Dr. Kaylene Barbe, Dr. Bobby Kelly, and Dr. Dan Reeder.”

Then there were the times she spent with friends and fellow residents of her dorm. They would gather on third north in WMU and engage in “hall talk” where they would sit and connect for hours every night.

“The next year, most of us lived in the same hall in Taylor together,” she said. “We always held our own ‘Last Night’ celebrations before moving out for the summer, which usually included our own version of ‘The Walk’ and thinking about the best memories of the year.”

Another Fork in the Road

After graduating OBU in 2015, Fullbright accepted a position as marketing director for a company in Shawnee that was owned by a fellow OBU alum. She also went on to earn a master’s degree in higher education.

But in 2016, she felt a calling and was presented with another fork in the road. That calling was to return to OBU and work in the admissions office. Fullbright and her husband, Aaron, ’14, simply fell in love with the community of Shawnee and couldn’t imagine leaving.

She began serving the students of Pottawatomie and Lincoln counties as an admissions counselor. From there, she transitioned to a role as admissions event coordinator, overseeing prospective student events and the OBU student ambassador team, The Herd. In 2019, she became assistant director of admissions and in 2021, she was named the new director of admissions.

“I have the most fun job on campus,” Fullbright said. “I get to work with the very best and most fun team in admissions. We work hard, but we also have a good time together.”

Not only is it shaping her future, but also the future of each student she helps bring into OBU and, ultimately, the impact they have on the world.

“Many students don’t choose a college knowing what might happen over the course of the next four years. I certainly didn’t,” Fullbright said. “I couldn’t have imagined that I would meet lifelong friends whom I still talk with daily. It’s easy to tell the OBU story when I know what is on the other side.”

One of those things on the other side is the profound impact OBU alumni have on the world. “Just look at the stats,” she said. “OBU grads do big, meaningful things. That’s a compelling reason to attend OBU, but students stay for their education because of the community and the people investing in them.”

And she particularly enjoys sharing with future nursing and science majors the benefits of all the hands-on experience they’ll gain from OBU’s distinctive cadaver lab.