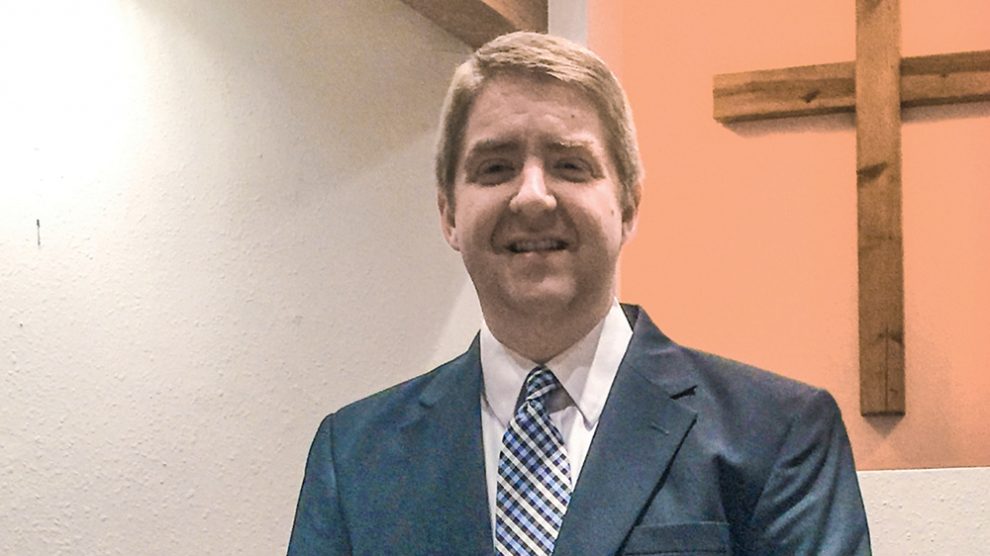 The Language of Music

“The love of music has always been with me,” he said. “However, I do remember singing in children’s choir and developing a real interest in it.”

Over the years, his interest grew as he became friends with music minister Jerry Brown at his home church, Quail Springs Baptist Church, in Oklahoma City. It was there that he felt God’s call to the ministry and began composing music. The first choral piece that Ware composed was an arrangement of “A Mighty Fortress,” which his high school choir performed.

“That was an incredible thing,” Ware said. “As a composer, you do a lot on the computer. You shut yourself away to work, and when you listen to what you’ve composed, it sounds mechanical. But when a choir sings your music, it comes to life and becomes something new. It’s very gratifying.”

Ware enjoys composing new arrangements for lyrics from old hymns and words of Scripture, so people will think about the words and reflect on them in a new way.

Ware said his decision to attend OBU was an easy one. After determining God’s call to the music ministry, he never considered going anywhere else.

“The choice seemed obvious,” he said. “Also, my dad was an OBU grad, so I grew up hearing good things about OBU.”

Life on Bison Hill did not disappoint, and Ware became an integral part of the OBU community, joining University Chorale, Symphonic Band and OBU Ringers.

“I very much enjoyed my whole OBU experience,” he said. “Because it is a Christian university, they not only invested in me academically, but encouraged me in my calling. The professors weren’t just teachers, but mentors, who got involved in our lives. The quality of the music education was top notch, but the personal and spiritual aspects of my experience there push OBU over the top, in my opinion.”

“I remember, in particular, appreciating Dr. Carol Bell, my piano professor, the encouragement she gave me and the musicianship she taught me. Dr. Jim Vernon, my composition professor, of course, had a great influence on me for sure.”

Ware believes the high level of achievement expected of him by his professors has served him well in the professional world.

“They always pushed me to do better,” Ware said. “The excellence they encouraged is the very thing that I now work toward on a weekly basis in what I do.”

While still in school at OBU, Ware served as minister of music of Kelham Baptist Church in Oklahoma City. After graduating, he continued his music education training at Southwestern Baptist Theological Seminary using the President’s Award Scholarship awarded him by OBU.

Following graduation from SWBTS, Ware began serving as minister of music at Wilmont Place Baptist Church in Oklahoma City, a position he continues to find rewarding and full of opportunities to put his education and experience to work.

“I use the composing and arranging skills I developed at OBU on a weekly basis,” he said. “I also learned how to interact with a wide variety of people in a good and loving way.”

“It stands out to me as being what OBU was all about. It’s the same thing that I strive for in my church. I tell my choir at church all the time that they are an example to the congregation of what it means to be the Body of Christ in all things, the way they sing together, fellowship together, all of it.”

When asked what the future holds, Ware said he feels a strong calling to the local church and loves serving at Wilmont Place.

“I have a feeling I will always be involved in church music ministry on some level and on this level for a long time. But I could see myself, at some point, being an editor for a music publishing company or recording company.”

Ware has been published by Hal Leonard Publishing, Shawnee Press and Lifeway. He recently launched his own online publishing company, musicwarepress.com,
to expedite the process by which churches can gain access to his work. Currently, his compositions and arrangements are being sung by congregations throughout the United States. They have also been performed by the Singing Churchmen of Oklahoma, of which he has been a member, the Singing Churchwomen of Oklahoma, and the Oklahoma City Community College Choir. One of Ware’s pieces, “Not I, But Christ,” has been translated into Korean.

“Music is something that brings all of us together. It has the ability to reach people in a different way than words do, almost like it speaks a different language all its own. When I traveled to Armenia with the Churchmen, we didn’t speak Armenian and they didn’t speak English, but we were able to connect with the people in a real way. There’s just something about singing the deep truth about God and who He is that communicates on an emotional and spiritual level.”

Ware plans to continue communicating God’s truth for many years to come, through his calling … the language of music.