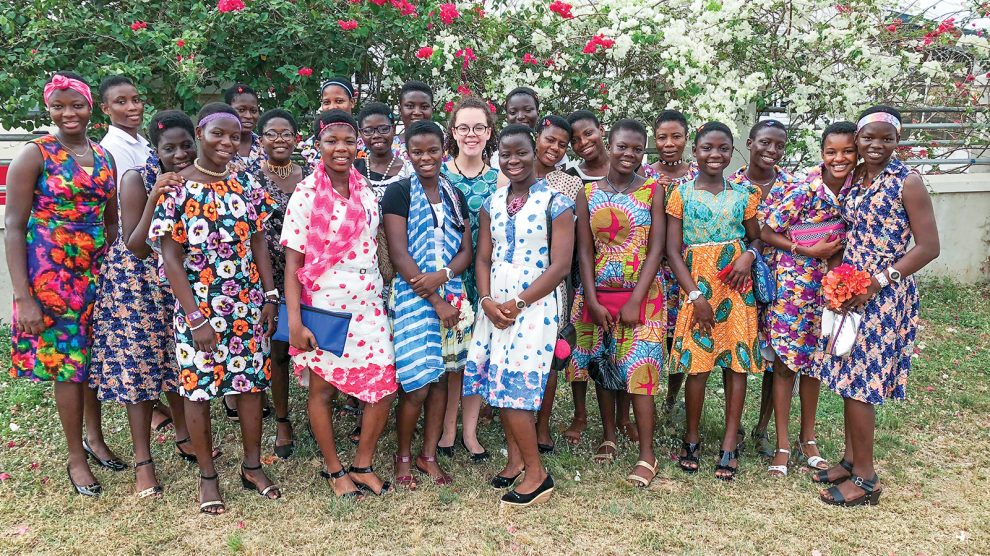 Alexis Besch went to Prague, Czech Republic, for three-and-a-half months where she experienced the culture, studied in new ways and grew deeper in her faith. She hoped her venture would help her to appreciate and adapt to other cultures in the future as well.

“I wanted to see what my faith and my values would look like when I wasn’t in a secure environment where everyone was like me,” she said. “It gave me a good opportunity to test and grow my values.”

Her classes abroad were taught in a similar style to her classes at OBU, but the professors emphasized gaining knowledge over striving for a grade.

“The professors would only address grades in regard to telling you how to pass. It was very focused on knowledge and learning the material,” she said.

Studying abroad helped Besch better understand how learning could impact her future. It expanded her horizons and made her consider different job opportunities and options for her master’s degree.

“It helped me to focus more on gaining knowledge for myself and my future rather than focusing on getting great grades,” she said.

While in Prague, Besch had to learn to balance her faith while engaging a diverse culture, explaining that most of the students who were there were from secular schools and had significantly different interests from her.

“Czech itself is known as a party scene because it is so cheap,” she said. “I found that I didn’t meet a lot of people who shared the same interests as me. So finding quality [study] time [with other students] was difficult because the other students wanted to go party all the time.”

As a result, the experience highlighted Besch’s love for studying and learning. Because her peers would skip studying, Besch was pushed to study on her own and rediscovered how much she enjoyed learning new things.

In her spare time, Besch learned more about Czech culture. One of her favorite ways to engage the culture was to visit some of the local coffee shops on her free days. She tried new food and spent time touring and hiking. She connected with a local church and attended Bible studies there. She also traveled on the weekends, visiting seven different countries.

The experience also allowed her to grow deeper in her faith.

“I better understand how to reach people with the Gospel now,” Besch said. “There is not just one structured way. This is something that I was challenged with, and I think it is very valuable.”

Lauren Shipman spent a semester studying abroad in Ghana, West Africa, providing her the opportunity to travel and pursue her passion for helping others.

Shipman spent the majority of her time helping at the Pearl House, an organization whose goal is to protect, educate and disciple young women who are at risk for child marriage, human trafficking or continuing the poverty cycle. The Pearl House provides at-risk young women with an education and a place to live while also introducing them to Christ, she said.

Shipman first discovered the Pearl House in high school while researching various ministries that she could pray for even though she was too young to volunteer.

Shipman’s classes were mostly self-taught instead of being in a traditional lecture-style setting. As a result, she did not have any time-constraints on when assignments were due, which Shipman said fit very well into the African culture.

“Everything was more hands-on than my classes at OBU, which I really enjoyed. It was nice to be out in the field actively trying to put concepts to work,” she said.

For Shipman, who says she is “not a natural risk-taker,” some aspects of studying abroad were challenging. She struggled with learning to try new experiences on her own and creating new relationships, she said.

“Traveling alone and being the only intern there definitely stretched me,” she said. “It was completely out of my comfort zone, but I knew that I was doing this for the Lord.”

The hardest part for Shipman was maintaining a connection between two worlds; staying active in Ghana while not losing touch with friends and family back home.

“It’s difficult when you don’t get to see your friends and family, and you are not a part of a community that is comfortable to you,” she said.

Shipman recalled how God used her discomfort to pave the way to create deeper relationships with the girls she was serving when she discovered lizards in her bathroom one evening early in her trip. Startled, she began to scream, causing several of the Pearl House girls to run to her room to find out what was happening.

“They didn’t make fun of me, but they took care of the lizard and got it out of my room,” she said.

From that point on, the girls would come in every night to get rid of any lizards they found and would stay to spend time with her.

“I realized how close we had become because of the lizards,” she said. “It was very cool to see how God used one thing that caused discomfort to create relationships.”

Along with spending time with the girls at the Pearl House, reading and helping them with homework, Shipman explored the community around her. She developed relationships with the locals and found that they are a very communal culture. After only a month, she knew almost all of the people in the community, discovering that they all went to the same church, she said.

Shipman found that the experiences in Ghana also gave her a new perspective on her time as she realized that the time she spends in college is short. It also taught her to enjoy the moment and value where she is instead of always looking ahead, she said.

“Four months seemed like a really long time to be away from my family and friends when I was leaving, but it was just a semester. When I got back, I realized how quickly it had passed. I then looked at the next semester wondering how I could get the most out of it in terms of academics, time with the Lord, and enjoying being in college,” she said.

Shipman encourages other students to study abroad, saying, “OBU is one of the best schools at accommodating their students, especially when it comes to ministry and integrating a student’s interests into their education.”