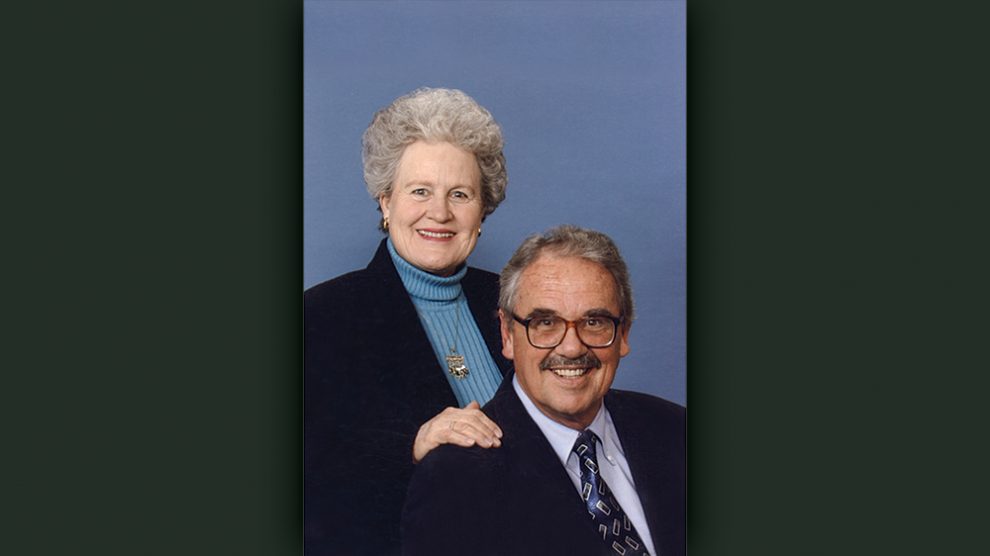 It is one thing to impress acquaintances and strangers, another entirely to impress your own children, those who see you at your weakest moments as well as at your best. Yet, that is exactly what retired missionaries Jim and Shirley Tye seem to have done. Of his hardworking parents, their son Mark wrote, “They have the most unselfish, servant hearts of anyone I have ever known.” Of his father, in particular, Mark said, “In my life, I have never heard my father complain or say something derogatory about another person.” High praise indeed considering the rigor and challenge of the work Jim and Shirley performed on the mission field and continue to be involved in today.

Jim and Shirley met in high school when Jim served as interim music director at Shirley’s church. They were married in 1956. As both had surrendered to missions at an early age, the happy couple  immediately set their sights on the mission field and began working toward that end. With the support and help of church members, Jim graduated from OBU in 1962 and continued his studies at Southern and Southwestern seminaries earning his degree in music from Southwestern. Shirley also picked up as many additional undergraduate hours as possible eventually earning her degree from OBU in 1987.

In 1970, eight years and three children after Jim’s OBU graduation, Jim and Shirley were ecstatic to be appointed to the mission field through the Foreign Mission Board of the Southern Baptist Convention. The only hurdle left to jump was language school. They took it in stride and cleared it with ease, unwilling to be slowed down by anything. Their youngest child, Timothy, was actually born on graduation day. “I wasn’t able to make it to the ceremony,” Shirley laughed. Five weeks later, the Tye family was on the mission field in Ecuador.

“I was appointed as music teacher in the seminary there,” Jim explained with enthusiasm. “We spent most of our time in Quito, the capital city. I worked with churches, helping them develop music ministries. We worked with the indigenous people in the Baptist churches there and had music festivals, and people came to know the Lord. They required more in discipleship, maybe, than people do here, so I didn’t just do music, but began working in church development and church planting. Eventually, the Lord opened the door for us to start a new church, Eternal Life, and we began to reach other members of the community.”

Jim and Shirley had the joy and privilege of serving as missionaries-in-residence at OBU twice during their missionary career. During one of those residencies, Jim received EMT/First Responder training that served him well upon returning to Ecuador, and Shirley picked up the 40 remaining hours of her undergraduate coursework and became an OBU graduate like her husband.

In the 1980s, an earthquake rocked Ecuador, and Jim was given the opportunity to serve on the Disaster Response Committee. “We wanted to meet some of the needs of the people,” he explained. “Through Hunger Relief Funds, we were able to establish the Abundant Life Human Needs Center. We were able to put together medical and dental caravans to reach rural parts of Ecuador.”

Over the years, Jim and Shirley hosted many evangelistic partnership teams made up of first- and second-year medical students, serving as translators for the teams. Jim was able to use his EMT training as well.

“We always felt that Ecuador was an open and easy place to minister and spread the Gospel,” Shirley said. “I know I just wanted to reach the end with no regrets, so I did everything I could every day. I remember getting up in the morning and thinking that I wanted to use every minute of that day for the people of Ecuador. One thing I did was teach sewing to young women to help them get employment. They were able to get on at the factories that way. Many of those women have now gone on to finish high school and college. At first, the locals didn’t send their kids to high school, but we began to encourage them to let them go. Some have college graduates now, and some of those graduates are called to missions. We did a lot of things in Ecuador, but in everything we did, we talked about missions. I believe it will bear fruit … ”

Jim jumped in joyfully saying, “ … It IS bearing fruit!”

Jim and Shirley agree that the time they spent as students and then as missionaries-in-residence at OBU helped them on the mission field. “I was in the music program,” Jim recalled, “so I didn’t have some of the classes that most people who are headed into missions have, but I think that all of the classes at OBU are strong on missions in different ways. No matter what they train you to do, they train you to do it for the Lord. I remember the chapel speakers being powerful. They told us not to ask ‘Why should I go?,’ but ask ‘Why shouldn’t I go?’ Of course, no matter how prepared you are, it’s never enough. There were things that we were called upon to do in Ecuador that we didn’t feel prepared to do, but the Lord helps you do it.”

All four of the Tye children, Jeana Tye Dickson, ’84, Mark, ’86, Scott, ex ’89, and Timothy, served willingly alongside their parents during their time in Ecuador, playing piano, translating, teaching Sunday school, and leading Vacation Bible School, among other things. Today, they continue the Tye family tradition of service in their local churches, raising their children to love the Lord
and share the gospel
as their grandparents have
done and continue to do.

These days, you will find Jim and Shirley serving in their local church, leading mission trips, taking part in various choral performances, and raising awareness for the Lottie Moon Christmas offering. In addition, Jim is a member of the Singing Churchmen of Oklahoma, a chaplain with the Baptist General Convention of Oklahoma Disaster Relief program, and a volunteer firefighter. He teaches OBU extension classes and works with the Robert Haskins School of Leadership, a ministry of the BGCO in the area of contextualized leadership development.

“I guess we are still doing here what we did there,” Shirley chuckled. “There’s no retirement in ministry, that’s part of the deal.”

Jim added, “As long as the Lord blesses us with good health, we just keep going.”