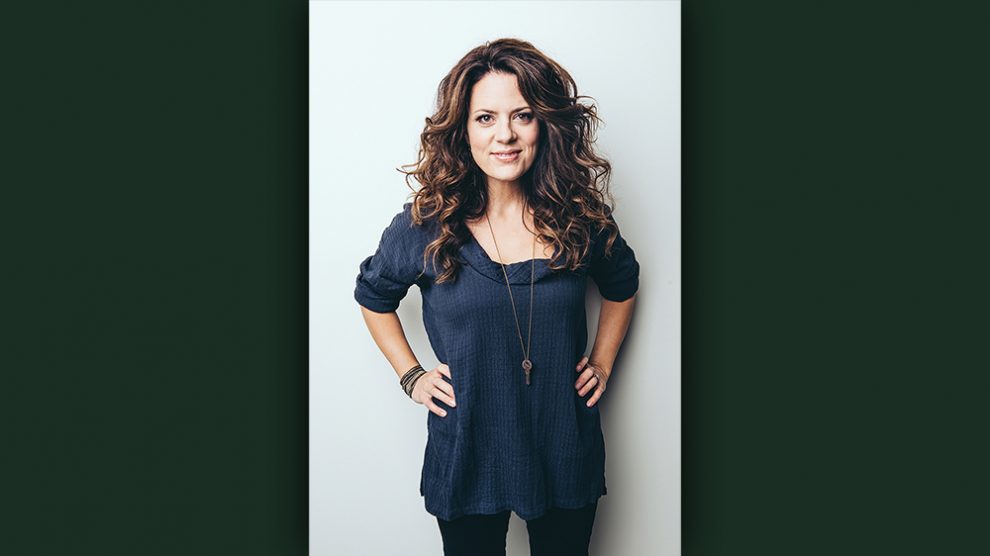 A gifted songwriter and worship leader Christy Nockels, ’96, is well-respected in the Christian music industry as a singer’s singer.

Christy Nockels has a gift for imbuing each lyric she delivers with an authenticity and emotional integrity that resonates with the listener. Considering it a true privilege to be used by God in His redemptive work here on earth on any level, she desires nothing more than to witness true revival in the church. To this end, she exhibits unique transparency and humility in both the songwriting and performance stages of her artistic process.

“The songs always come from something deep,” she said, “some kind of refining work that God is doing in me first. It always starts with God’s pruning and my response to that pruning. The more we yield to Him, the better the fruit that comes from it, so, for me, songwriting is always an ‘I lay me down’ kind of process where I ask God, ‘What do you want to do in me so I can share it with the people?’ It’s an approach that I learned from my dad.”

A pastor’s daughter, born in Fort Worth and raised in Oklahoma, Nockels grew up singing in church.

“I sang my first solo when I was seven,” she said. “My dad said, ‘Christy, I want you to find a song that speaks to your heart and share it with our people.’ My parents were always very ministry-minded. They didn’t say, ‘You’re so talented, Christy. People need to hear you.’ Instead, they taught me to minister to people’s hearts. I was always on the lookout for songs that were meaningful. I think that early platform and the way my parents approached the whole process had a big impact on the way I write songs.”

Knowing that music would play some role in her future, but unsure what that future would look like, she chose to attend college at OBU in 1992 and major in music.

“Going to OBU was just what you did in my family,” she said. “My parents met and fell in love there. My older brothers went there. The choice to attend was really a family thing, and OBU felt like home to me from the beginning.”

During her time on Bison Hill, God began to whisper to her heart, calling her in a vocational direction she hadn’t anticipated, one that was difficult to define at first.

“My time at OBU was very shaping, but not in the way that I thought it would be,” she said. “At that time, there were only a couple of educational tracks you could take in music at OBU. I discovered that classical music was not for me, but I didn’t know what else to do. Worship music was not a genre at that time.”

A gifted musician in his own right, Christy’s husband Nathan chose to attend OBU and major in music as well. The two started dating in 1993, following her freshman year, and the couple’s shared experience at OBU continues to influence their ministry today.

“It was an exciting time to be at OBU,” she said, “an exciting time to be alive. People were starting to sing songs to God, not just about Him. It was new and fresh. All over campus, there were pockets of Bible studies happening and people having worship nights. Nathan and I loved getting to see Christian artists at our own Raley Chapel. The whole experience was incredibly shaping for us, something I don’t think we would have gotten on a secular campus at that time.”

In 1993, Christy and Nathan attended the Christian Artists seminar in Estes Park, Colorado. During the conference, they spent quality time with a mutual friend of like mind and purpose, Charlie Hall. Within six months, Charlie, Nathan and Christy were working toward recording an independent record under the name Sons & Daughters, one that would, upon its release, lead to an invitation from Louie Giglio to participate in the first Passion conference in Austin, Texas.

OBU felt like home to me from the beginning.

Christy and Nathan married in 1995, sharing not only a mutual love and respect for one another, but a burning, God-given desire to “push the boundaries of Christian music.”

“It was just the two of us in our little apartment, and there were all of these songs coming out of us. It was a special time,” she said. “We didn’t know we could make a living doing what we were doing. We thought we would have to get ‘real’ jobs to support our music habit.”

Upon graduation, Christy and Nathan moved immediately to Houston to lead worship Bible studies at First Baptist Church Houston’s Metro Bible Study. Feeling a pull to stay in Oklahoma City, Charlie Hall stayed behind, and Christy and Nathan went on to record another album under the name Sons and Daughters. In 1997, a representative from a Christian music label visited Metro Bible Study and began a conversation with the couple about their future. In 1998, the couple signed with Rocketown Records and formed the duo Watermark. Watermark recorded four acclaimed albums, giving Christy’s voice a national platform.

In 2008, they moved to Atlanta to become part of Passion City Church, where Christy served on the worship team with Chris Tomlin and Kristian Stanfill. A year later, she released her acclaimed solo debut album “Life Light Up” and spent much of the next two years touring with Tomlin and Passion, her husband Nathan intricately involved in the Passion ministry as well.

Christy and Nathan now make their home in Franklin, Tennessee, where she continues to write and record. They collaborate musically whenever possible, writing songs that come from a place of mutual experience and meaning. The album “Let It Be Jesus,” released in 2015, was one such collaborative effort and is special to Christy because it marks twenty years of marriage and ministry with Nathan.

“A straight-up genius songwriter, musician and producer, Nathan is one of the best musicians I know,” she said, “and the most loving husband and dad to our three precious children.”

The Nockels make a point of involving their children in their ministry just as Christy’s father once involved her in his ministry. They don’t consider the demands of parenthood to be a hindrance in any way, although being a mother has certainly had an impact on Christy’s creative process.

“I have three children and homeschool two of them,” she said. “These days, inspiration comes while I’m standing over the kitchen sink or waiting in the carpool line. I carry my iPhone everywhere and record songs and thoughts as the Lord gives them to me, thousands of little moments, and some eventually turn into something that is an offering, a story.”

For Christy and Nathan, the personal and professional struggle lies elsewhere.

“I think the real challenge comes in staying in the lane that God intends for us,” she said. “I love Ephesians 2:10. It talks about how we are God’s workmanship created to do good works that He has prepared in advance for us to do. I believe that all our days are planned and that God is sovereign and has specific things laid out for us to walk into. With social media like it is, we are all living in a saturated moment, and the hardest thing is to stay in the secret place. When Nathan and I first began this journey, we didn’t have a marketing plan. There were no cell phones. There was no internet. There was a purity to what we were about back then, and we have to discipline ourselves to stay there. We can’t let ourselves look right or left or worry about what other people are doing or we will derail. So we try to focus on just doing what He’s given us to do and let that speak for itself. Longevity in ministry comes from staying the course.”

Christy and Nathan continue to welcome the future one day at a time, enjoying the rewards that come with remaining obedient to God’s leading.

“It’s a gratifying thing when people come up to you and say things like, ‘You gave me the words to sing to God when I didn’t know how to say what was in my heart.’ There’s nothing like it, and I can’t imagine doing anything else.”