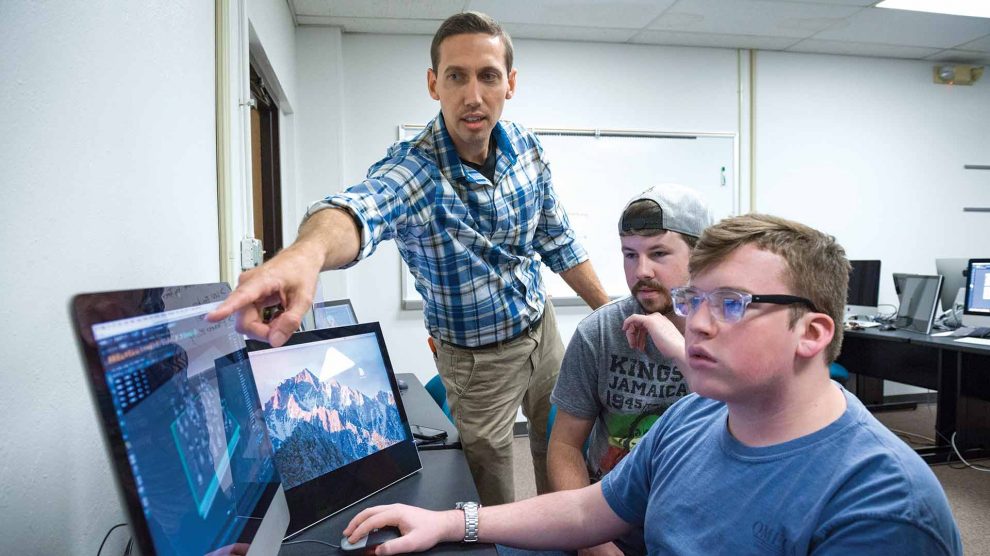 Few decisions in life are more impactful than the ones that involve a person’s career path. Nobody knows this better than OBU faculty member Benjamin Baxter.

It was five years ago when Baxter, OBU’s chair of the division of communication arts and assistant professor of animation and media production, found himself at a career crossroad. At the time, he was living in Orlando working in 3D modeling and animation.

Ready for a change, he’d been offered a position with one of the biggest and most well-known industry heavyweights in the world – Lockheed Martin, the aerospace, defense, information security and technology company.

At the same time, he’d seen a faculty job opening for a small, Baptist university in Shawnee, Oklahoma.

You couldn’t find two more divergent career paths if you tried. For Baxter and his young family, there was a lot to consider.

“So, for Lockheed I would have been in the simulation division, working on the F-35 joint strike fighter,” Baxter explained. “It was just a different world. I was working as a 3D environment artist in Orlando. I’d been doing that for nine or 10 years. Then on my interview at Lockheed I’m seeing all these armed guards at the facility. For someone who’s basically a working artist, that was eye opening.”

But the opening for a faculty member at OBU intrigued him as well. To better understand why, it helps to learn a little about the personal background of Baxter himself.

A big reason Baxter felt drawn to the opportunity at OBU, is because it reminded him of his own college experience. As an undergraduate, he attended a small, private Baptist university very similar to OBU’s setting and culture.

“It was just such a phenomenal experience,” Baxter recalled of his undergraduate years. “Small classes, strong sense of faith, people were so connected. And that’s exactly what I felt about OBU. I just felt like I really understood the mission and values of this place.”

In fact, for a time when he was a college student, he had moments where he thought about how much he would love to teach at such a place. “I was always told, ‘hey you’d probably be really good at teaching,’” he said.

But teaching wouldn’t be in his immediate future. At least, not in the U.S. Instead, after graduating and earning his degree in graphic design, Baxter spent two years in China teaching English as part of the International Mission Board.

Spending time in such an unknown environment doing positive work helping others was an impactful experience. During his time in China, Baxter also was able to expand his interest in photography. When his two years of service were up, he was ready to return to the U.S. and re-focus on his future.

Baxter continued his education at the Savannah College of Art and Design in Georgia, where he earned a master’s degree in animation. From there, he took the position in Orlando working in 3D environmental design.

For the next decade, he would establish himself with an excellent reputation as a working artist, putting his talents and education to work. As a husband and a father, Baxter wanted to be the best provider he could for his young family.

This is what led him to start exploring new opportunities, and to that career crossroad.

“I knew that the Lockheed position would be a pretty drastic lifestyle change just because of the type of setting, all the security, all the government work and things that come along with that,” he said.

When he reached out to OBU about the faculty opening and sent his application materials, he got a call back the very same day. That sent a clear message – literally, and figuratively.

“The students bring so much energy, it’s contagious.”

In the end, as appealing as a high-paying career with an industry leader like Lockheed Martin seemed, Baxter knew where he belonged.

“I felt supported from the day I first arrived here, by my fellow faculty members and the entire community,” Baxter said. “And the campus is beautiful.”

Baxter appreciates the interconnectedness he feels across campus, and across disciplines. He believes the experience for students is enriched by the way faculty from different areas of study share ideas and thoughts, bringing a fresh and valuable perspective.

And he enjoys finding ways to integrate faith into the learning experience, which he admits can be tricky when it comes to the arts.

“But, for example, if we’re talking about photography, one way we approach it is that the imagery being captured is God’s beauty, God’s creation,” he said. “And so, for example, with a portrait, you need to understand that God has created this person, and you’re trying to capture and bring out their beauty.”

More than anything, Baxter enjoys the work he gets to do with OBU students. And, clearly, his enthusiasm is having an impact. In 2020, he was recognized with the Promising Teacher Award, a distinction presented to a junior faculty member who has demonstrated outstanding potential as a teacher.

But if you ask Baxter, he says that other members of the OBU community are just as responsible for him receiving the award as he is.

“I’ve just been given so much support in my time here. The community has really put me in a great position to succeed and have the best possible impact on our students,” he said. “The students just bring so much energy, it’s contagious. They make it so much fun to be here. I love the potential they bring and the growth they experience. When they’re here, it’s like they’re standing on a dock looking out to sea and you see the enthusiasm and hope in their faces. It’s inspiring.”