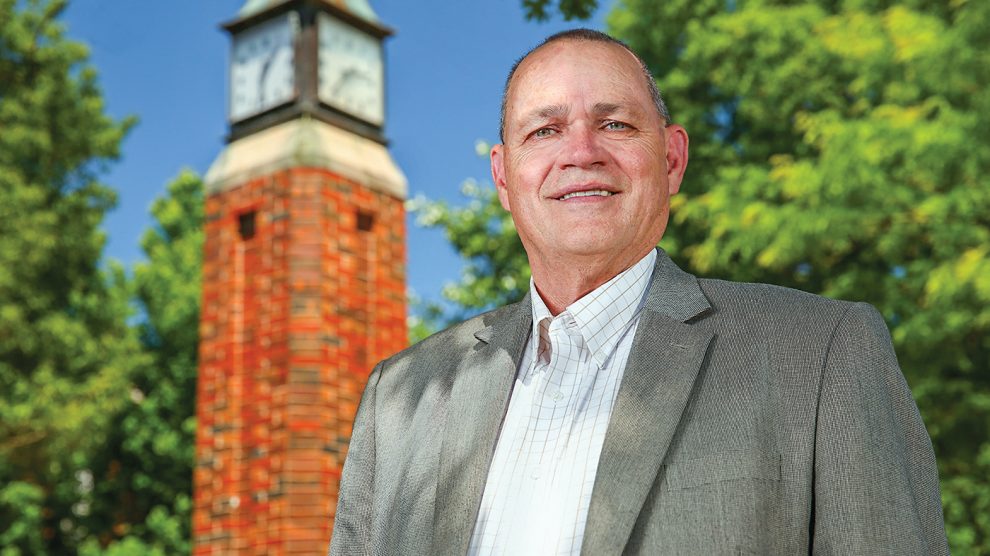 Teacher, principal, superintendent, preacher, pastor and deacon. Dr. Bob Gragg, ’73, has held all of these titles in the span of his impressive career.

Bob Gragg has carried out the responsibilities of each of his positions with professionalism, compassion and excellence, consistently demonstrating a Christ-like ability for discernment and encouragement, while bringing healing to the lives of those with whom he works and interacts. Having surrendered to ministry as a senior in high school, he began his coursework at OBU in 1969, hoping to discover the particulars of his calling and to develop the skills necessary to live out that calling.

“I thought God might want me to be a pastor,” Gragg said. “But I still really felt called to education. Looking back, it’s clear how God has worked all that together in my life, but it wasn’t clear then. It was like walking across a bridge with a flashlight, seeing just one step at a time. At OBU, I learned that my calling could involve church ministry and education at the same time.”

Encouraged by that realization, he pursued a degree in physical education with a minor in religion.

“I wasn’t prepared for the challenges of college initially,” he said. “I had to work a little harder, but there were some great folks at OBU who helped me do the extra things I needed to do to catch up. For instance, I had never written a college-level paper before. I could research well and knew math and science, but my English and composition skills were lacking. I got there, though, and I have OBU to thank for that. At OBU, I never felt like a number. There was a lot of support there from faculty and among friends who wanted to see each other succeed.”

Gragg’s years at OBU were formative and exciting, not just for him, but for the University itself. During his freshman year he observed the faculty working together to develop the first western civilization classes and remembers being impressed by their work ethic.

“They taught me that it’s okay for students to research on their own, to go and find answers for themselves, and it’s okay for professors to discover and participate in the learning process alongside their students,” he said. “Student learning and discovery were the centerpiece of my educational experience at OBU, and it changed the way I thought about education in general. Until then, I thought I was going to school to be a lecturer, but what I found at OBU was the joy of collaboration. It was a real eye-opener for me, a vision that I caught from the get-go and something I have tried to pass along in every educational and ministry setting that I have been a part of.”

Gragg married his high school sweetheart, Theresa Boyd, ’73, before his junior year of college. As a pastor’s daughter and vocal music major with plans to teach, Theresa understood Gragg’s dual calling and supported him fully in its pursuit, even as she pursued God’s calling and direction in her own life. Gragg’s partner in both life and in ministry, Theresa continues to be a special blessing in his life.

“Through everything, she has always been there for me,” he said. “She’s my counselor and my friend, someone who always wants to help in any way she can. She has been a wonderful companion to me, a fantastic mother, and is now a great Nana, the best!”

Student learning and discovery were the centerpiece of my educational experience at OBU.

Following graduation, the Graggs moved to McAlester where both were employed by the public school system. While in McAlester, the couple’s children, Julie Gragg Landes, ’01, and Matthew Todd Gragg, ‘01, were born, and Gragg earned his master’s degree in education administration from the University of Oklahoma. He taught physical education, health and social studies. He also served as assistant coach for the middle school football team and head coach for the middle school basketball team, while serving as a supply preacher at his home church in Haileyville.

In 1981, he moved his family to McLoud, where he served as an elementary school principal for four years before taking a job as superintendent of Crowder Public Schools in 1985. From 1988-1996, he served as director of the Kiamichi Technology Center, McAlester campus. While at Kiamichi, he earned his Ph.D. in Educational Administration and Organizational Leadership from Kennedy Western University. In 1996, he became superintendent of Southern Oklahoma Technology Center in Ardmore and served in that capacity for 10 years before considering retirement.

“During that time, I was blessed to serve as an active deacon in three churches. I filled pulpits and even served as a bi-vocational pastor for five years. Through it all, I felt just as strongly as I did in college that the calling to both was actually one and the same. When you’re in the middle of it, it’s hard sometimes to see the results of what you are doing. But when I look back on the biggest blessings in my life, I see that God was able to use me to encourage people and bring out the best in them – whether that meant, as a coach, putting a kid back in the game after he’d messed up and teaching him not to quit on himself or, as a deacon, walking a new pastor through a major transition in his life and helping him rise to the challenge.”

Before his official retirement in 2008, Gragg served as director of the East Central Workforce Investment Board and worked as director of adult education for Moore and Norman public schools. He found this position just as rewarding as any other he had held to that point because he had the opportunity to help adults earn their GEDs or regain the credits they needed to graduate high school.

“They came from all walks of life,” he said. “Some were intimidated at the very thought of opening a book. Others couldn’t even read at a self-sustaining level. Some had financial problems and family obligations. Some had drug or alcohol problems. But all were trying to better themselves, to equip themselves to succeed, and I got to encourage them through that.”

One woman in particular stands out in his memory, a 71-year-old woman who came with her adult son so that they could earn their high school diplomas together. In working with this woman, Gragg was reminded of his own mother, who, after giving birth to 10 children and watching nine grow up, realized that she was the only member of her family who had not graduated from high school.

“She went back and got her high school diploma through a GED program,” he said. “She had been working as a kindergarten teacher’s assistant and was awarded her diploma with the first class that she had helped teach. It was very special.”

In his retirement, he continues to work as a consultant, provide leadership training, fill pulpits and hold interim superintendent positions from time to time. Yet, his favorite title these days is “Grandpa.” Without exception, Gragg feels the privileges and obligations that come with that title trump all others.