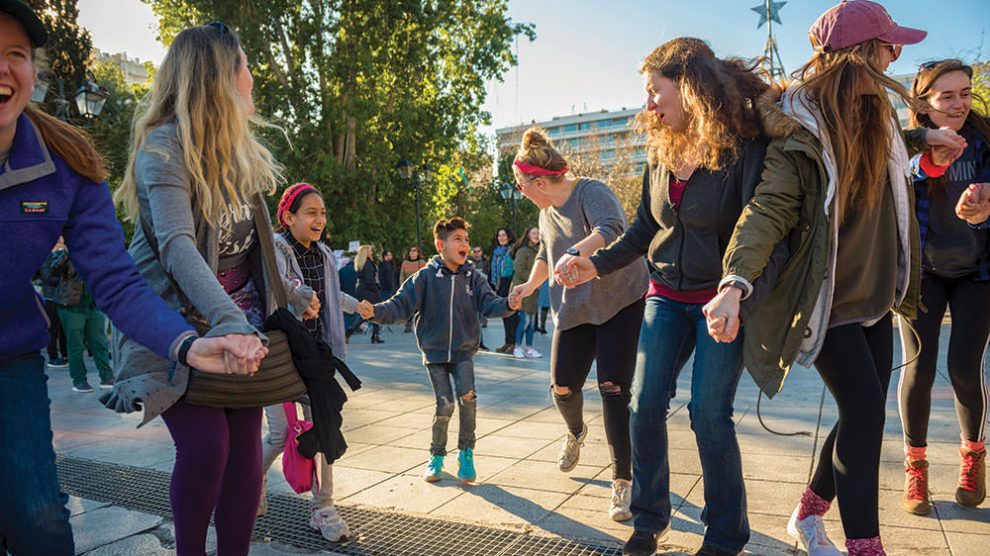 While OBU is located in the central Oklahoma community of Shawnee, its impact reaches across the nation and around the world. In fact, a central component of the University’s mission statement is a call to “engage a diverse world.” One of the quintessential ways OBU achieves this aspect of its mission is through Global Outreach Trips or “GO Trips.”

In January of this year, a team of 17 students and mentors traveled to Athens, Greece, to serve and share the love of Christ with refugees in the area.

In an effort to help students think both globally and locally, the Avery T. Willis Center for Global Outreach partners with students, faculty and staff to provide support and opportunities for students to reach out to people in Shawnee, Oklahoma City, the United States and all around the globe. GO Trips provide unique opportunities for participants to learn new perspectives while experiencing the integration of faith and learning.

While in Athens, the 13 OBU students and four mentors who accompanied them spent most of their time in one of the most densely populated places in Europe, Kypseli. Although identified as a “neighborhood,” the area is a far cry from the American idea of what a “neighborhood” encompasses. Home to 200,000 refugees and immigrants from around the world, Kypseli does not feature the comforts and security one would identify with a neighborhood in America. Rather, it represents a place of uncertainty, where people huddle together to escape the dangers of their homelands while dealing with the pressing issues of poverty and displacement. The OBU team was fully submerged into the world of these refugees and saw a side of Greece many do not expect or want to see.

Junior science major Kayla Thompson was surprised by what she found.

“I had never been to Greece before,” she said. “Although many parts of Greece are gorgeous, we spent the majority of our time in the more poor, dirty and crowded areas. As we walked down the streets, we saw curbs lined with scratched and dented cars. We saw buildings covered in graffiti. We saw homeless people huddled in sleeping bags. We met Greeks struggling to withstand the economic crisis, some who have been unemployed for years. We also met refugees from many nations, including Syria, Iraq, Iran and Afghanistan; refugees who had left their homes, or what was left of them and traveled across the Mediterranean to Greece for a safer and more promising future.”

The sole purpose of the GO Trip to Athens was to serve the refugee population. The OBU team accomplished this through partnerships with multiple local organizations that operate exclusively for the benefit and betterment of the refugees. One such organization is “Streetlights,” a ministry dedicated to equality, cooperation, community and collaboration for refugees. “Streetlights” opened in February 2010 and offers refugee children a place to play in a safe, secure area. As a result of their efforts, the ministry has a very good reputation in the Kypseli community. The OBU team members stayed in the upper level of the “Hive,” the name for the children’s safe place, and were able to experience the work of the ministry in an up-close and personal way.

The OBU team also partnered with “Good Samaritan,” a Christian organization that teaches English through Bible stories and offers childcare, laundry services and a clothing bank. The team assisted “Good Samaritan” by helping out in the nursery and showing love to all of the children there.

Many people go on a trip like this expecting to preach the Gospel orally wherever they can find an ear to listen, whether the audience is receptive or not. However, the OBU team learned to preach the Gospel by simply living out Christ’s love to those around them. Loving on refugee children just as they are and meeting them in their place of need spoke volumes to both the children and their parents. While witnessing the hopelessness of the lives of those around them was difficult and often discouraging, the OBU team found sharing Christ’s love to the refugees bridged the gap of the language barrier and cultural backgrounds.

Former OBU photographer Jeremy Scott was impacted powerfully by the experience. As a photographer, he also had to be mindful of the photos he took for security reasons. For many refugees, they are escapees from a violent situation or homeland and if any photos of them were to surface anywhere on the internet, their lives would be in danger. Scott recorded images from the trip with this in mind, beautifully capturing the lives and culture of the refugees without jeopardizing their safety.

For all who went, the response and reactions were similar. Each team member’s eyes were opened to the devastation and hopelessness the refugees faced. They all walked away mindful of how important it is to engage a diverse world.

“I think we emphasize the importance of widening our worldview, but I think God also shows His love in new colors and new stories,” said Jasmine-Rose Mitchell, junior early childhood education major. “I do believe we understand God more when we learn about other cultures, countries and people. I think GO Trips are vital for OBU students, faculty and staff because they are experiences that teach you more about God, more about yourself and more about His people. The trips help you love, feel compassion and explore worlds outside of your own.”