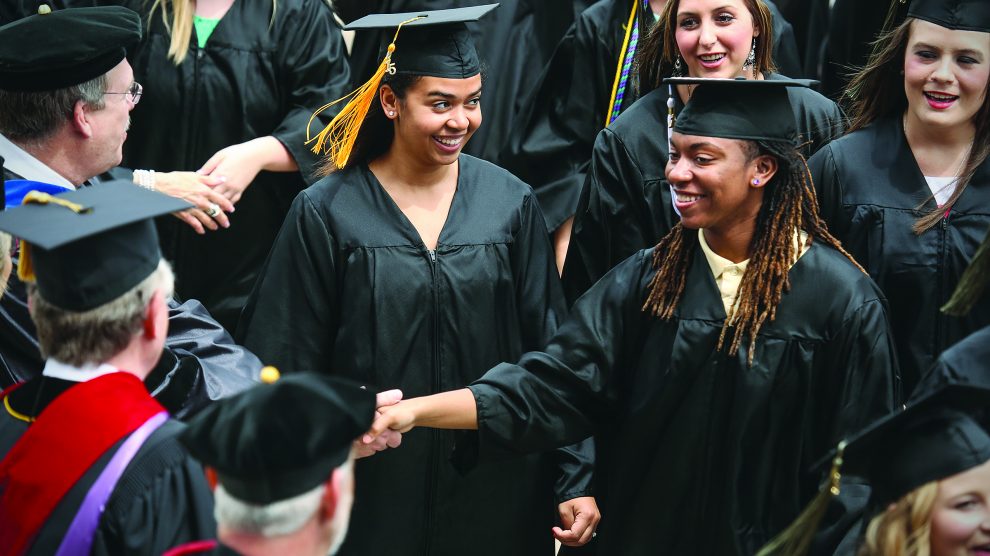 The University celebrated the close of another successful academic year during its 101st Spring Commencement, Friday, May 15.

Barbara Green, co-founder of Hobby Lobby, challenged the graduates to apply their education and keep God at the center of their lives. During the ceremony, OBU honored both Barbara and her husband, David Green, with the Honorary Doctor of Christian Ethics degree.

“Today, you have accomplished something in your short lives that my husband and I have never accomplished,” she said. “Neither one of us went to college.”

“But now, for you graduates, comes application of that education. This is where the ‘rubber meets the road,’ as we used to say. And in that process of application the most important question is, ‘where is God?’ Will He be the center of all you hope to attain in life, or will He be pushed to the sideline of your life?”

Dr. Albert Chen, professor of physics, was honored with the Distinguished Teaching Award. He joined the OBU faculty in 1986. During his time at OBU, he has conducted extensive research with NASA, including Martian dust simulation studies and researching the design of high altitude diffusers for space shuttle main engines.

Dr. Contessa Edgar, assistant professor of biology, was recognized with the Promising Teacher Award. She joined the OBU faculty in 2012. She previously worked as an associate research scientist for the Oklahoma Medical Research Foundation and an instructor in the graduate program in biomedical sciences at the University of Oklahoma Health Science Center.

Dr. Linda McElroy, professor of kinesiology and leisure studies, was honored with the Meritorious Service Award. She joined the OBU faculty in 1990. She recently concluded 25 years as the OBU cheerleading sponsor. In 2010, she received the Distinguished Teaching Award from the University.

The University also presented the J.M. Carroll Award to Dr. Reagan Bradford. The namesake for this award, Dr. J.M. Carroll, served as the first president of the Baptist University of Oklahoma. OBU presents the award in recognition of outstanding denominational service in the state of Oklahoma. Bradford is the former director of the Lipid Research Clinic at the Oklahoma Medical Research Foundation. He has served as a trustee for the Baptist Foundation of Oklahoma, as well as both a member and chair of OBU’s Board of Trustees.

In his charge to the graduates, Whitlock challenged them to remember they carry the distinction of being graduates of OBU, having studied at an institution that has sought to stand for Christian distinctiveness and academic excellence since its founding in 1910.

“You are recipients of a great heritage, and I charge you to move forward with hope and courage. I challenge you to use what you have learned as a foundation block upon which you will build the rest of your life.”