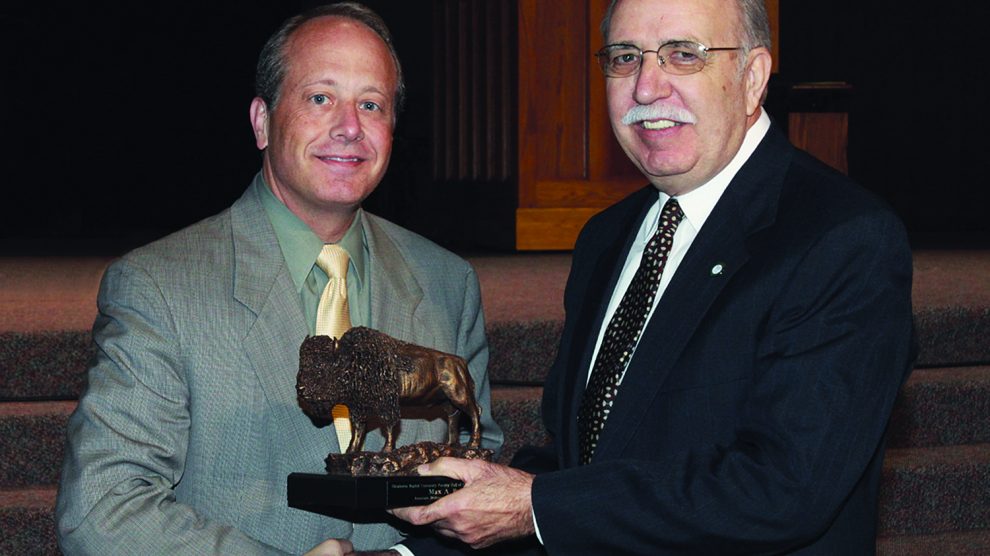 The OBU Office of University Advancement recently announced the establishment of the Max Brattin Fine Arts Endowment Fund. Brattin, professor emeritus of economics at OBU, established the endowment as part of his estate. The endowment will fund guest musicians, conductors, theatre troops and other costs involved in advancing fine arts exhibits on campus.

Brattin was a member of the OBU faculty from 1966 until his retirement in 2000. He served on the faculty council for 15 years, including three terms as chair. He chaired the curriculum committee for two terms and was faculty athletic representative for 12 years. He received OBU’s Distinguished Teaching Award in 1984 and the Phi Beta Lambda Teaching Award in 1989. He was inducted into the OBU Faculty Hall of Fame in 2010.

During his OBU tenure, he served as advisor for several student organizations, including Sigma Delta Phi, Delta Mu Delta, Phi Beta Lambda, Omicron Delta Kappa and Mortar Board. He was also a member of the faculty advisory committee of the Oklahoma State Regents for Higher Education for two years.

He was born March 15, 1938, in El Reno, Oklahoma, the son of Merle A. and Mona Day Brattin. He graduated from Mulhall High School in 1956, earned a Bachelor of Science in Business from OBU in 1960, and an MBA from Louisiana State University in 1962. Brattin taught at Howard Payne University from 1963-66 before joining the OBU faculty. He passed away in March 2013.

John Parrish, executive vice president emeritus, said Brattin always loved and supported the arts. “A significant part of his estate was distributed to arts organizations, including the gift to OBU to create an endowment fund which will provide income on a permanent basis for programs which will enrich the OBU community,” Parrish said. “Max was an active and dedicated member of the OBU family for more than 40 years, and his desire was to do something which would benefit and enhance the community he loved for generations to come,” he said.

Dr. Ken Gabrielse, dean of the Warren M. Angell College of Fine Arts, said that Brattin’s gift will help the department plan culturally enriching activities for the campus and community.

“We are thrilled as we begin to explore all the possibilities provided through Max’s love for OBU and the arts,” he said. “This gift will also serve to enhance the strong support of so many generous contributors to OBU’s Friends of the Arts.”

Gabrielse said Brattin’s gift will be utilized in many ways this year, including the annual Hanging of the Green, the concerto-aria and funding performances that were previously out of the department’s price range.