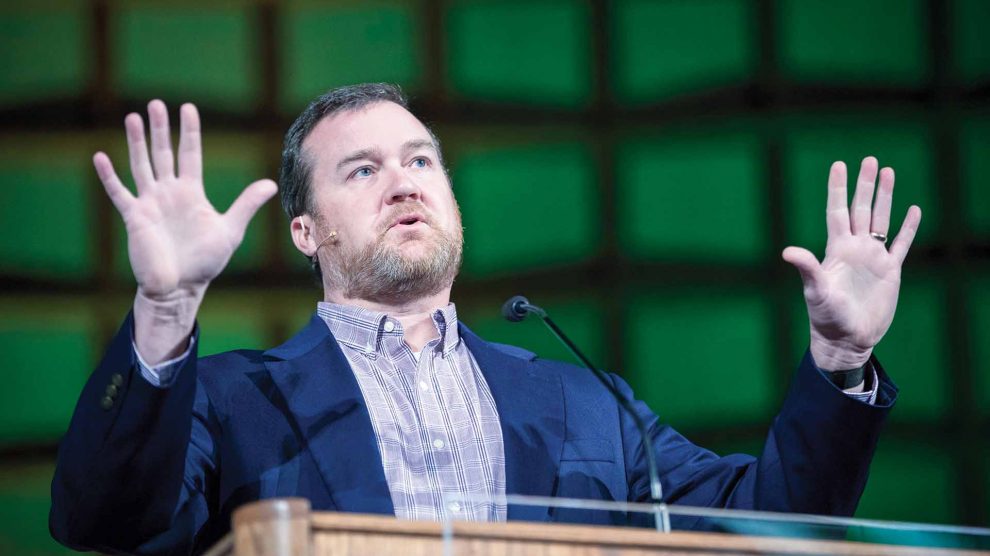 Called to the ministry at an early age, Dr. Todd Fisher has followed God’s calling and never looked back.

Dr. Todd Fisher, ’92, grew up in suburban Fort Worth, Texas, raised in a single parent home by his mother, who was a schoolteacher. Sports were a major part of his life, whether watching or playing; especially the Dallas Cowboys and Texas Rangers, teams for which he is still a passionate fan.

One day, at age 14, he was watching a TV show featuring Orel Hershiser, a pitcher for the Los Angeles Dodgers. Hershiser shared his testimony, and his interviewer gave an invitation. Fisher was moved by the gospel message. He got on his knees there by his bed and asked Jesus to be Lord of his life.

OBU was never the plan, at least not to Fisher’s knowledge. With numerous Baylor alumni in his family, he had planned to attend college in Waco. In fact, by spring of his senior year in high school, he was enrolled, had a roommate and even knew his future room number on the Baylor campus.

Then, one day, that all changed. Fisher had stopped by his friend Clint Paschall’s house to pick him up, when his friend’s father, Paul, answered the door and began talking to him about OBU. Paul was an OBU alumnus and shared openly about his love for his alma mater. In fact, when all was said and done, 26 students from Fisher’s senior class attended OBU, mostly thanks to Paschall’s influence.

He convinced Fisher to attend an OBU Preview Day that spring, along with some of his friends.

“I had barely left Fort Worth,” Fisher said. “We didn’t go on vacations or anything like that. I thought, ‘You know…I’ve never been to Oklahoma. So, why not?’ ”

As he prepared for college, various people told him not to major in religion, so he would have a fallback plan in case ministry didn’t work out. While at Preview Day on the OBU campus, and with that advice as the backdrop, he heard a very clear message from the Holy Spirit.

“There was this moment where we’re walking across campus, getting close to time to leave. I’ve never heard God audibly speak to me, but about as clear as the Spirit has ever spoken to me, I just sensed God say to me, ‘Have I called you to the ministry or not? You don’t need a fallback plan. You need to come to this place, and you need to study what I’ve called you to do.’”

From that point forward, he never looked back.

“Dr. Wilks and Dr. Evans were very influential to me,” he said. “I love those two guys. Both of those men set me on the right path. They put a good taste in my mouth about what ministry is and should be and the realities of it. I definitely can see why God brought me here to OBU, because I was going to click with those guys.”

Fisher is grateful that both men saw potential in him and nurtured it. He also noted that they epitomized one of OBU’s greatest assets – professors who personally know and care deeply for their students.

“Those two men took an interest in me and invested in me. I knew even as a student, I could call them if I needed something. That’s what will always make OBU special to me.”

During his time on Bison Hill, Fisher gained invaluable ministry experience, serving on staff at multiple churches and preaching in many more. Beginning his freshman year, he participated in OBU’s Ministerial Practical Experience (MPE) Days, organized by Wilks. Four or five times per semester, an association in the state would have an MPE Day and Fisher, along with several other student preachers, would load up in a van and go preach in different churches.

During his sophomore year, he served as youth minister at FBC Weleetka, Oklahoma, where he also preached every Sunday during a six-month span between pastors. The next year, as a junior, he preached somewhere around the state almost every Sunday, preaching to congregations ranging in size from 12 to 800. He began serving as pastor of Hopewell Baptist Church in Bethel Acres, Oklahoma, during his senior year.

A Life of Ministry

Fisher graduated from OBU in 1992. He then continued his studies through Southwestern Baptist Theological Seminary at the extension center housed on the OBU campus while also preaching at Hopewell. It was during this time that he began dating his wife, Jamy (King) Fisher, ’94. They had known each other through mutual friends but it wasn’t until after he graduated that the two began dating. They were married in July 1994 shortly after Jamy’s graduation from OBU.

While leading the state’s convention was never his aspiration, he can see now how the Lord was preparing him for this role all along.

“I’ve been a pastor for 30 years. That’s all I’ve ever known,” he said. “I’m looking forward to building relationships with our pastors and churches in this state. Being present, being available and really continuing the role of our state convention in partnering with state churches and helping them accomplish the mission.