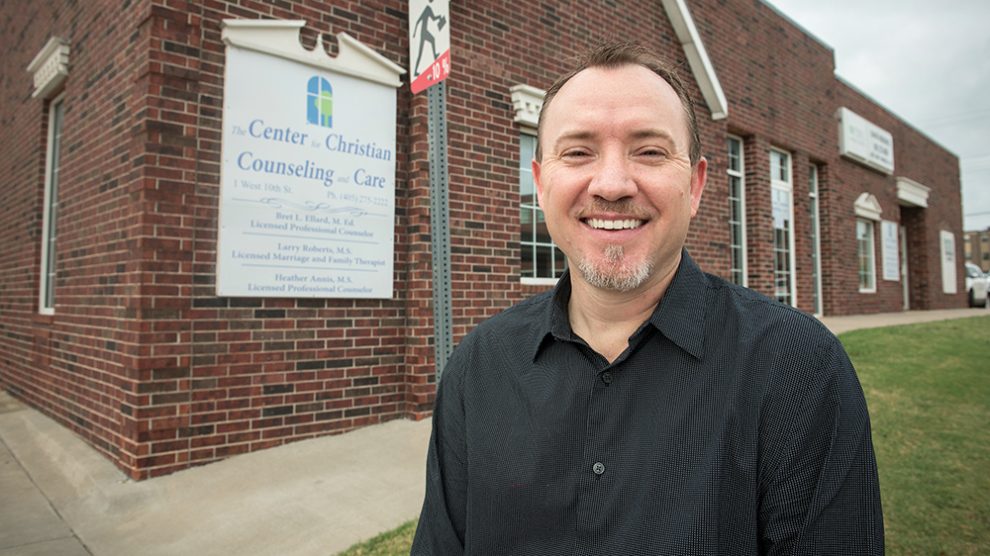 Larry Roberts, ’97 and ’03, shares about the impact an OBU education made on his life and how he found his calling in Marriage and Family Therapy.

Larry Roberts came to OBU on what he thought was a whim. Yet, what he found was a life of purpose and significance, one devoted to helping others heal through the power of therapy.

Roberts grew up in Ardmore, Oklahoma. Following high school graduation, he wasn’t sure what to do next.

“Choosing to attend OBU was impulsive, to say the least,” he said.

He considered enlisting in the armed forces because his father was a veteran, but didn’t see that as the right path for him. He hadn’t given much thought to college because more time in school didn’t appeal to him. However, some of his friends planned to attend OBU and asked him to go with them. He enrolled at OBU and majored in religion with an emphasis in biblical languages. Yet, his real interest was in his minor – family psychology.

“During my undergrad years, I landed in a family communication class with Dr. Oscar Jeske [professor emeritus of family development and counseling]. I appreciated his way of thinking and his way of looking at the world and became captivated by the study of family dynamics.”

Roberts has many wonderful memories of being on campus, but his favorite memory happened the night before classes began his sophomore year. That was when he met his future wife, Candace Hale Roberts, ’93, following a concert in Raley Chapel. The two began dating and were married less than two years later.

He completed a Bachelor of Arts in Religion in 1997, but after graduation, he began to sense that God was calling him to return to school and pursue a master’s degree in marriage and family therapy.

One day, as Roberts worked as the customer service manager at Homeland, Dr. Jeske came into the store and asked him about a certain kind of bread he liked but couldn’t find anywhere. Roberts tracked down a source for the bread and ordered some for his former professor. When Jeske came by the store to pick it up, Roberts decided to ask him about OBU’s MFT program.

“He invited me to his office and explained the process required to get into the program. To this day, I believe it was that hard European bread I ordered for Dr. Jeske that got me back into school,” Roberts said.

Roberts completed his Master of Science in Marriage and Family Therapy in 2003 and over the next 10 years, he spent time working at the Unzner Child Advocacy Center, Moore Youth and Family Services, Red Rock Behavioral Health, and Christian Counseling, PLLC, in Moore and Shawnee.

In August 2013, he and two colleagues, Bret Ellard, ’81, and Heather Annis, opened the Center for Christian Counseling and Care (CCCC) in downtown Shawnee, where he serves as a partner and therapist. He specializes in helping married couples reconcile and restore their relationships, helping families manage stressful times and helping clients heal through trauma, grief and loss.

Roberts believes his decision to be a marriage and family therapist was a calling to be obeyed, rather than a choice to be made.

“I don’t look at becoming an MFT as my decision, but rather as obedience to the One who gifted and equipped me to become an MFT,” he said.

“Getting a master’s degree in marriage and family therapy allowed me to leave a job I needed and begin a career I wanted,” he said. “It has opened my eyes to more clearly see God’s design for the family unit and has allowed me to positively impact the lives of people in so many ways.”

While working as a marriage and family therapist is challenging, Roberts considers it an honor to be invited into the lives of hurting people.

“When I see people make changes in their lives that help them stay healthy, and then remain married for many years to come, that is my biggest reward,” he said.

As he looks back on his time at OBU, Roberts credits his professors with leaving a lasting impact on his life and his career.

“Dr. Jeske was the biggest influence during my time at OBU. His love for people and his desire to help them make positive and lasting changes in their lives was a powerful testimony of how God uses us for His glory. Dr. Tom Wilks [professor emeritus of religious education] was another enormous influence on me. His intelligence, compassion, and demonstration of humility and love for everyone he met was unmistakable. Dr. Glenn Sanders [professor of history] is yet another professor with considerable influence on me. The passion, energy and enthusiasm which he uses to teach students is a model I seek to imitate in my own classroom.”

In 2014, Roberts began teaching as an adjunct professor of marriage and family therapy at OBU, where he teaches graduate students.

“Not only do I love the students and enjoy their excitement at learning about this great field, but teaching helps keep me sharp in the therapy room,” he said. “As an adjunct professor, I try to teach students to be ready to get in the game and make a difference.”

Out of all that he does, his most important work is as a husband and father.

“Part of being a good therapist is taking care of yourself emotionally, physically and spiritually, he said.  “I am first and foremost a husband, so my marriage comes before everyone and everything in my life. To that end, Candace and I make sure we spend time together daily to take care of our marriage, because if it fails, all else fails. We make sure we spend time with our children individually and as a family to keep connections fresh and alive.”

The Roberts have five children and a son-in-law, and have been married for 25 years. They are active members of Immanuel Baptist Church in Shawnee where Larry teaches an adult Sunday School class and Candace is involved in the ladies’ ministry and the music ministry. Together, they lead marriage seminars in community and church settings as well as teach discipleship courses on marriage-related topics. For relaxation, Larry plays competitive racquetball and enjoys golf and chess.

Why Humanities and Social Sciences matter on Bison Hill