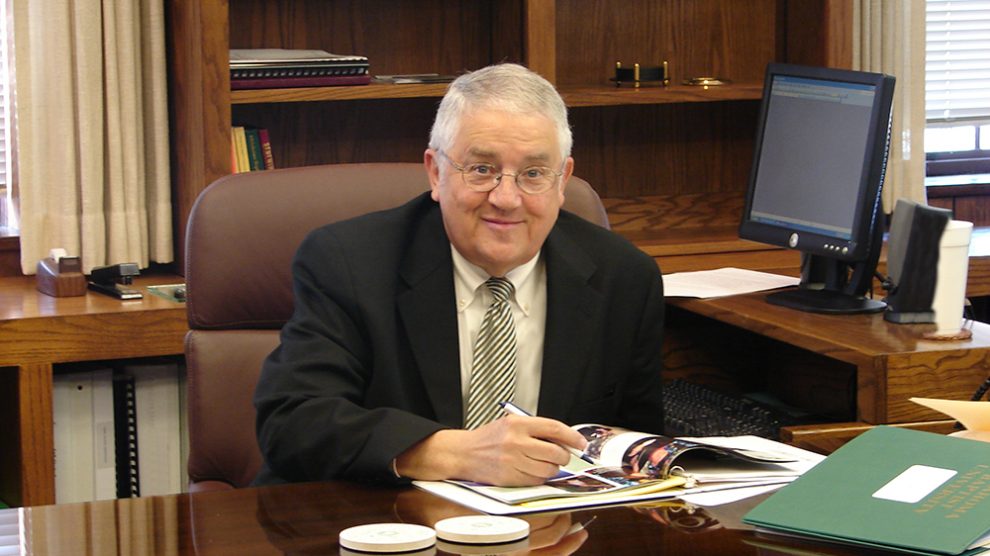 Dr. John W. Parrish, executive vice president emeritus, was inducted into the Oklahoma Higher Education Hall of Fame Oct. 14, 2014. We trace the span of his career and the remarks he made reflecting on a life of service to his beloved University.

The fingerprints of John W. Parrish are everywhere on Bison Hill. That tends to happen when someone invests more than 38 years of full-time work and 12 more years of continued service to an institution. Most with that longevity have a niche or a corner of the world where they plant their flag. But Parrish has served with excellence in diverse and varied segments of the University, truly touching the entire campus and leaving an indelible mark on the institution he loves.

It is hard to imagine OBU without his legacy. In fact, he quipped that he has officed in 14 different locations on Bison Hill. He has served as sports information director, director of public relations and interim president of the University among many other positions. He has written books about OBU history, having experienced so much of it firsthand. He has served as the voice of Bison basketball and football, continuing in those roles today.

He has received numerous honors and awards from OBU, including the naming of the University’s public relations office suite in his honor in 2002, and the conferring of an honorary doctorate in 2010.

A Commitment to Excellence

Parrish excelled in each area he worked, leading to new opportunities and promotions. Yet, his exemplary career began humbly, awaiting the opportunity to thrive.

Parrish was born and raised in Drumright, Oklahoma, where he attended school through the 10th grade, then finished high school in Eureka, Kansas. After earning a Bachelor of Science in General Business from Oklahoma State University in 1961, serving in the Air Force Reserve from 1961-62, and earning a Master of Science in Journalism from OSU in 1964, Parrish found himself working as editor of the “Southside Times” newspaper in Tulsa. A college friend who was teaching math at OBU told him about an opening for a journalism instructor. “I’d never thought about teaching before that, but the idea was intriguing to me.”

Parrish applied and was hired after interviewing with OBU President William Neptune. He began his OBU career in 1964.

In addition to his teaching duties, he also served as director of university public relations and sports information during this time, a role he held exclusively from 1966 to 1979. Among the many roles Parrish filled on campus, he identifies most with being a communicator of the University’s message. “The heart of my career has been based on communications with internal and external audiences,” he said. “At the same time I served as executive vice president, I still continued to supervise external communications.”

In 1986, Parrish was named vice president for institutional advancement. In 1991, he took on the role of senior vice president for business and external affairs before moving up to the executive vice president and chief financial officer position in 1995, where he served until his retirement in 2002.

“OBU offered me a variety of professional opportunities and challenges throughout my career,” he said. “Each leadership position I held served to build a solid foundation for the next level of responsibility.”

Even in the face of full-time retirement, Parrish did not end his service to OBU. He served as interim president from 2007-08, chaired the OBU Centennial Committee for the 2010 Centennial Celebration, authored a book series on OBU history, and continues on as university sports historian and radio voice of Bison sports teams.

Parrish has completed his 50th year of service to this institution, where he journeyed for a job interview all those years ago. It is no wonder the Oklahoma Higher Education Hall of Fame came calling.

“I’m very honored by it,” Parrish said. “I’m joining a list of excellent faculty and administrators around the state and at OBU. To be listed with them is a great honor. It shows that they are reaffirming my commitment to OBU and OBU’s commitment to me.”

As Parrish looks back on his career, a few key things stand out above the rest – being present for the 1966 national basketball championship and broadcasting the 2010 national basketball championship; meeting and marrying his wife, Mary Kay; and serving on OBU President Bob Agee’s executive cabinet from 1986-98. He recalls that span as the highlight of his career, serving alongside Dr. C. Pat Taylor, Tom Terry, Dr. David Sallee, Dr. Dick Rader and Dr. Mack Roark.

Parrish has not set a date when his service to OBU will come to an end, but he has plenty to occupy his time away from Bison Hill before and after that time comes – grandchildren, yard work, sports, exercise, family time and traveling. Yet wherever he goes and however he spends his time, Bison Hill is always with him and he will continue to impact his beloved institution.