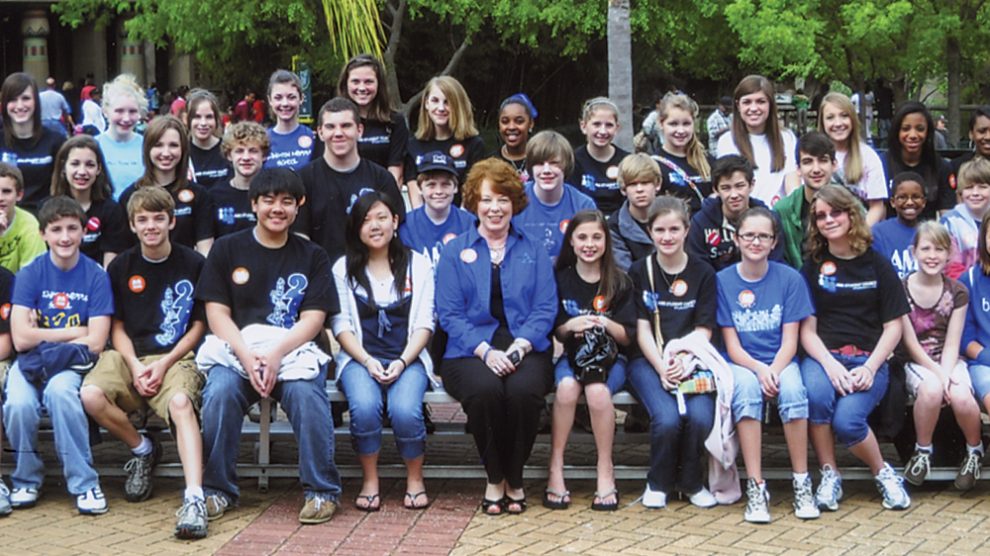 It was with great sadness that the students and faculty of Arlington Middle School in Arlington, Tennessee, said goodbye to their beloved principal four years ago. Forty years after graduating from OBU and beginning her successful career in education at Sequoyah Elementary in Shawnee, Pat Prescott was retiring and returning home to Oklahoma to be near family and give back to the school that had given her so much.

It is no wonder that the AMS family was sad to see her go, as Prescott is a gifted educator, administrator and advocate of children with an uncanny gift of making everyone she meets feel like a cherished friend. Enthusiastic about learning and the cultivation of true community, she inspires excellence in everyone who works with her.

AMS parent Deauna Wayson wrote, “Patricia Prescott is the kind of principal that every child wishes they could have, every parent wants for their child, every teacher wants to work for, and every superintendent wants running one of his or her schools.”

“Her sense of fairness and adventure made everyone enthusiastic about trying new things. There wasn’t a fear of failure or disappointment, but a feeling of excitement,” AMS teacher Bonnie Meadows wrote.

AMS librarian Karen Haggard added, “She never had to yell or scold to get her point across; she just made her expectations for conduct clear. Nobody booed in our gym, bullying was not tolerated, and good character was recognized and celebrated.”

“It was obvious to everyone who worked with her that being a principal was a ministry to her,” said AMS Assistant Principal Melissa Lukas.

Humbled by the praise of her colleagues, Prescott did not know what to say in response to these accolades, but was quick to agree on the last point. “It wasn’t about me,” she smiled through tears. “From the very beginning of that school, it was God’s. It was a ministry from day one.”

Arlington Middle School opened in 2000 with just 500 students. Prescott, a first-year principal, was given the helm. Believing that when children feel safe and loved, they will learn and grow, she treated students and faculty with the same respect that she hoped to receive from them, extending grace and mercy to all while holding the bar high both educationally and professionally.

“I saw my job as being a facilitator,” Prescott explained, eyes wide with passion. “You know, ‘Tell me what you need, and I’ll get out of the way.’ Teachers have to have that freedom and support to perform at their best. A successful school is a community effort, everyone pulling for everyone else, me pulling for teachers, teachers pulling for kids.”

A cheerleader by nature, Prescott did everything she could to keep spirits high at AMS, holding impromptu staff meetings to boost teacher morale when necessary and routinely leading her faculty in light-hearted chants to refocus and energize the group as a whole. To encourage compassion, Prescott asked her teachers to keep pictures of themselves in middle school on their desks and to look at them when their patience wore thin. “It’s about mutual respect,” she said. “You have to give a child room to be a child.”

Under her dedicated and prayerful leadership, AMS enrollment grew from 500 to 1,300 students.

“It was just the most unbelievable thing,” she marveled. “Time after time, people would come into our building, and say, ‘Something is different here. You can feel it when you walk in the building.’ Of course, there are some things I couldn’t legally say, but I would always respond with, ‘Well, I know this school is prayed over. Perchance, that is what you feel.’”

By her own admission, Prescott’s philosophies and methodologies were greatly influenced by her undergraduate experience at OBU. “It’s about your people,” she explained. “That’s where it all has to start, not buildings or facilities. I was nurtured, cheered, and loved all the way through my time at OBU. Grady Cothen was OBU president then. He created such a community of caring and concern that I always felt safe there. I always felt like if I had a bump in my road, there would be a faculty member that I could go to that would stand in the gap not for me, but with me.

“At OBU, I learned that you should surround yourself with people that can help you find the answers and can make you better. At AMS, I hung a sign that said, ‘A friend is someone who makes you a better person.’ That came from my experience at OBU because that is what happened to me there.”

Prescott, a social person by nature, struggled a bit to focus during her freshman year at OBU. Her close friend Katherine and Katherine’s mother OBU Professor Kathryne Timberlake stepped in to help. “They put me on study schedules,” Prescott remembered, “nothing punitive, but it was like having a cheering squad. Dr. Timberlake told me, ‘God is going to use you in a big way, Pat, and you must be prepared.’ That was OBU. It was funny, and it was fun, and it was real.”

Prescott and her husband Charles, also retired, are grateful for the time and opportunity they have to pour back into their alma mater in any way possible so that they might influence the next generation. She currently serves on the OBU Alumni Board as vice president, and she and Charles attend OBU events and act as host family to one of OBU’s international athletes. In her free time, she tutors at a local school. Prescott laughed, “We teachers never really retire, do we?”