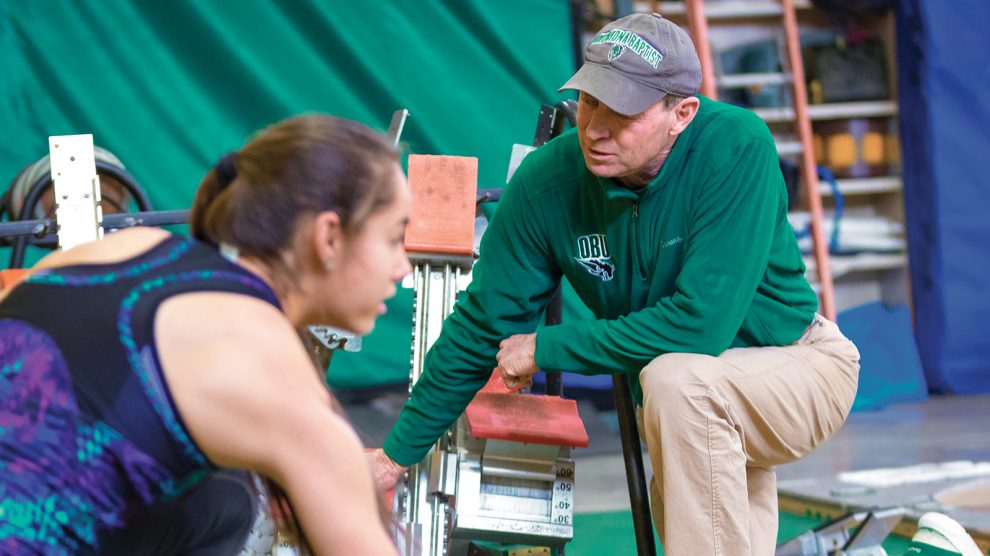 A Legacy of Championship Service

Coach Ford Mastin has led OBU Track and Field to national dominance, all while maintaining focus on his primary goal.

Growing up in the country outside of Okmulgee, Oklahoma, Ford Mastin learned many valuable lessons. The value of hard work. The appreciation of nature’s beauty. A love for the Lord. And a passion for athletics. After leaving his rural roots behind and moving to Stillwater in eighth grade, Mastin continued to excel in academics and athletics through high school.

He came to OBU with plans to build a career in music and ministry, and graduated with a bachelor’s degree in music education in 1977. He was a member of the Bison track team and was part of a core group of students that led a rejuvenation of the program. Little did he know at the time that he would one day be called on to return to Bison Hill as a coach, to build on the legacy of the program.

While at OBU, he sensed a call to missions and ventured to Southwestern Baptist Theological Seminary in Fort Worth, Texas, where he earned a Master of Divinity. While there, he spent time training with the TCU track team and was ultimately hired as an assistant coach. He enjoyed working with the athletes and realized that their international athletes were the Christian minority on the team.

“Coaching led to the idea that a great mission field for me was public education in America,” he said.

Mastin then went on to teach and coach in Prague, Oklahoma, for 14 years. Then, something happened and God opened a door he wasn’t expecting.

“The idea of coming back to OBU as a coach was started when David Sallee suggested I consider it,” Mastin said. “I applied twice for the job, and finally got it the third time, after my second master’s degree was completed [Master of Education from East Central University], to be able to teach in the OBU PE department. I sensed the call to prepare and motivate college students to be teachers and coaches and do the ministry I was doing in the public schools.”

Mastin has seen that calling manifest in so many ways since coming back to OBU in 1996, this time as the track and cross country coach and assistant professor. A national championship-winning coach many times over and member of four national coaching halls of fame, Mastin takes the most pride not in what happens on the track, but rather in what happens in the lives of his athletes after they leave Bison Hill.

“At the last state cross country meet we hosted, there were nine high school coaches that were at one time on a team at OBU,” he said.

Mastin’s list of accomplishments is long and impressive. He is a 13-time NAIA National Coach of the Year with 18 national championships. He has led 497 athletes to 1,383 All-America honors and has coached more than 150 individual and relay national champions. Currently serving as track coach and assistant professor of physical education and health and human performance, he received the University’s Meritorious Service Award during Spring Commencement in 2018. In 2001, he received the Promising Teacher Award.

Yet, when asked how he would sum up his career to date at OBU, Mastin doesn’t list trophies or victories. Instead, he focuses on his primary goal: developing people.

“This is a day-to-day adventure in building relationships,” he said. “Fun trips, exciting competitions, development of great athletes, constant projects and lots of hard work. Memories of thousands of special moments.”

He isn’t shy about the top objectives he has for his student-athletes either, listing the three most important things he wants them to learn.

“First, the most rewarding goals are the ones you accomplish with others,” he said. “Second, no award is as great as the ‘thank you’ that might come when you help someone with no one knowing. Third, that bad thing that happened is just one chapter of your biography. Turn the page; the chapters to come will make a great story.”

Mastin maintains a commitment to “helping OBU be God’s place.” He seeks to do this by appreciating and encouraging others to stay on task, play their role, and care about others in a way that portrays a Christ-centered atmosphere.

When asked what brings him the most satisfaction in his job, Mastin replied, “probably the thing that brings the most pain. It is watching people leave after four years. You’ve invested a lot of effort in helping them reach their potential. They have become like a family member, but you have to say ‘goodbye’ and hope they stay in touch.”

Mastin has too many memories to pick only one as the highlight of his career. However, one recent moment was extremely special to him.

“Watching the World Games on TV last year, and seeing the lead-off runners of the 4×100 relay. The women’s bronze-winning team and men’s silver-winning team were started by former OBU track athletes.”

In addition to his skills on the track, Mastin is also an accomplished artist. Whether painting or drawing, those close to him often see him doodling away or see the finished product of his work.

“I have always tried to paint a picture for every wedding for an athlete I’m invited to,” he said. “That has been a hard promise to keep up with. I love to make Bison-themed Christmas cards to give OBU people and recruits. I try to model that something homemade is meaningful.”

Mastin is also a talented actor and vocalist, having starred and performed in numerous plays and musicals over the years. He took a turn as a traveling salesman in OBU’s production of “The Music Man” in 2015 and played the lead in Shawnee Little Theatre’s “South Pacific” the same year.

“I like to be a part of Shawnee Little Theatre when my son is directing and my daughter is in the cast. It is a guaranteed six to seven weeks of family time that can’t be duplicated,” he said.

Mastin cherishes family time. His youngest child, Kaeley, is a junior at OBU and has starred in numerous stage productions herself, while his son, Trevor, ’16, currently teaches art at Will Rogers Elementary in Shawnee while also following his passion for acting and directing on stage. Mastin’s oldest child, Linsey, ’09, teaches English at Shawnee High School, while his wife, Terri, is a fourth-grade teacher at Horace Mann Elementary.

No matter where you find Ford Mastin, whether on the track with a whistle around his neck, in a quiet place with a paintbrush in hand, in costume ready to take the stage, or at home investing quality time with his family, you can rest assured that he is dedicating himself to impacting others, teaching them to live with love and compassion while also achieving their highest potential.