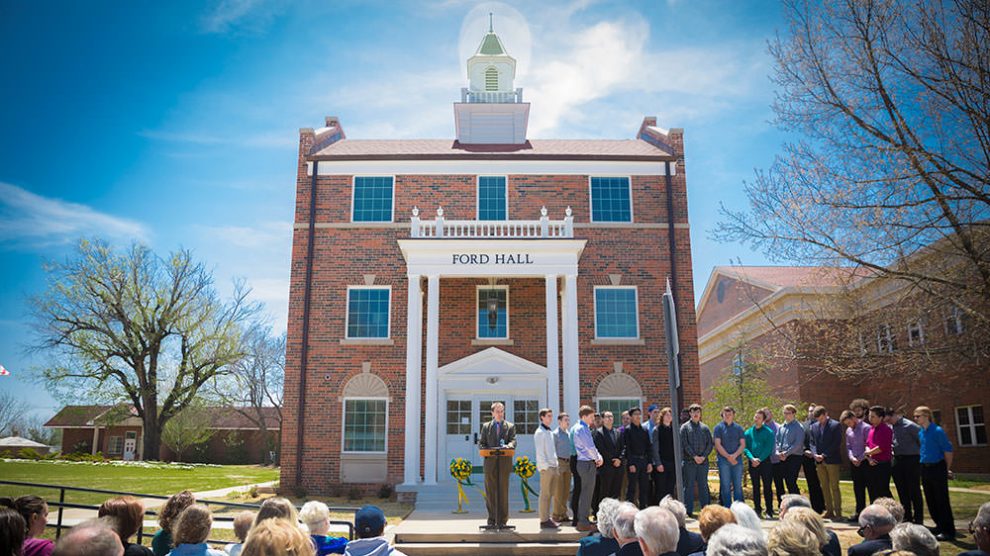 After decades of service to music students on Bison Hill, a renovation brings new life and purpose to this iconic campus landmark.

Ford Music Hall has proudly stood on Bison Hall for 67 years, a symbol of the University’s heritage of excellence in musical education. Built in 1951 following a generous gift from the Ford family, it has served as the practice facility for music majors and the home of the famed Bison Glee Club. While the level of performance and dedication to craft transpiring within its walls has never waned, the passing of the years brought with it the physical tolls every facility encounters.

In need of repair and renovation, a new vision emerged for the historic brick building. As Dr. Chris Mathews, dean of the Warren M. Angell College of Fine Arts, considered the needs of current and future music students, he began to see not only the potential that improved space held for music majors, but also the myriad possibilities for students within the entirety of the College of Fine Arts.

When the renovations officially began in late August 2017, Mathews shared his vision for the reshaping of the landmark building to serve as a space where students from throughout the Warren M. Angell College of Fine Arts will hone their skills as musicians, artists, debaters and actors in a creative, collaborative and inspiring environment.

With this new purpose came a new name, and “Ford Hall” opened for use for the spring 2018 semester. The renovations include a new foyer, modernized practice rooms, a recording studio, art studios, a piano pedagogy lab, an art and animation lab and the Bison Glee Club’s rehearsal room. Pianos in Ford Hall were replaced with Steinway-designed Bostons.

During the dedication ceremony, Mathews built upon his vision for the College of Fine Arts and for this remarkable new home for its students.

“All of these exciting and inviting spaces were developed for our students, so that they might imagine, work, grow, collaborate and thrive; that they may be transformed while also serving as tools of transformation; both artists and artwork, crafted by the very Creator of all things.”

“Imagine the young men and women who will practice, paint, act, design, debate, compose, create and collaborate inside Ford Hall. Men and women representing the full gamut of the Warren M. Angell College of Fine Arts; students who are with us today, their children, and even their grandchildren.” — Dr. Chris Matthews

View a photo gallery of the Ford Hall interior below.