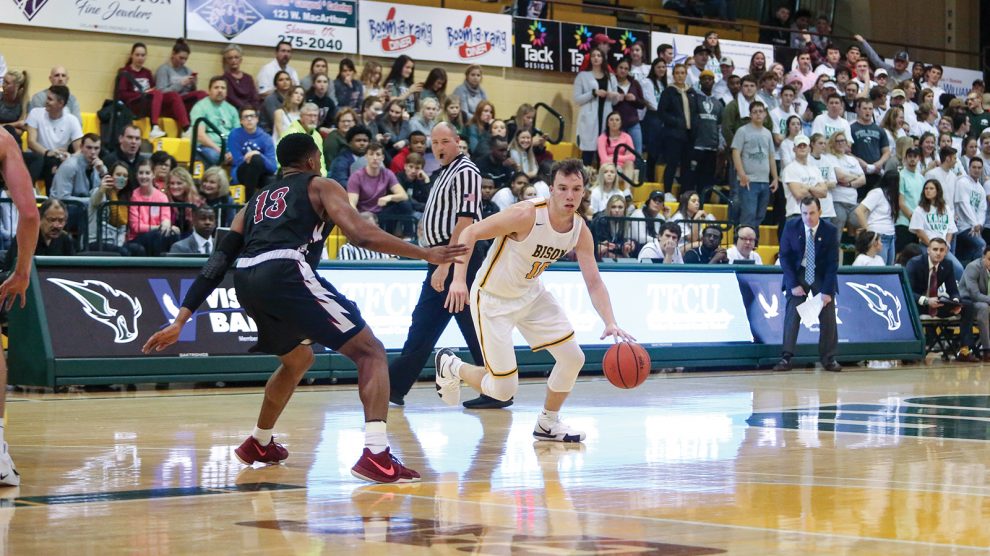 Thompson brings skill to the court, teamwork to the locker room and diligence to the classroom.

Sophomore clinical health and human performance major Brantly Thompson came to OBU in August 2018 to play basketball. Arriving in Shawnee from Tuttle, Oklahoma, where he excelled as a high school basketball player, Thompson was up to the challenge of college life on the court. A major standout during his freshman year on the Bison basketball team, Thompson shines in the classroom as well.

Growing up in Tuttle, Thompson doesn’t remember a time when he didn’t love to play basketball. Although he played many different sports, basketball was always his favorite.

“I can’t recall the first time I ever started playing basketball,” he said. “I just know that my dad coached me throughout my childhood. I grew up playing different sports, but basketball always stuck with me because it was what I was best at. Also, playing basketball runs in my family.”

He excelled at the game, helping to lead his high school team to the state semi-finals. He also earned the Canadian Valley Conference Most Valuable Player award and represented Oklahoma in the Faith 7 game, played on OBU’s campus. He earned Little All-City recognition. He then chose OBU because it was “the perfect fit for him both athletically and academically.”

Upon arriving on campus, the 6’4” shooting guard immediately made an impact for the Bison during his freshman campaign on the court. He scored his season-high of 22 points in a game against Rogers State University and averaged 10.3 points per game for the season. He started in all 21 games during the season.

His outstanding play earned him recognition outside of Bison Hill. He was named the Great American Conference Player of the Week during week four of conference play when he averaged 19.5 points per game and made 70 percent of his shots in road victories over Harding and Arkansas Tech.

While Thompson takes his role on the men’s basketball team seriously, he also takes his role as a student just as seriously. While he puts his highest effort into both basketball and his studies, he admits that balancing the two can be a difficult task at times.

“Time management can be tough,” he said. “I sometimes find it difficult to do homework or everyday tasks while also improving my game. Being a student-athlete leaves little free time, but the sacrifice is worth it.”

Thompson did well maintaining that balance during his freshman campaign. In fact, he was nominated for the College Sports Information Directors of America All-District Academic Team by earning a 3.75 grade point average. He also earned a spot on OBU’s Athletic Director’s Honor Roll.

Being a student-athlete is a decision Thompson is glad he made. To him, playing basketball has matured him in ways he didn’t know were possible. Thompson has learned to push through adversity and apply hard work to accomplish goals because of basketball. He applies these lessons with his studies and with every aspect of his life.

Thompson spends many days training. Whether that is practicing with his team, individual workouts with coaches, weight training, or shooting on his own, he is always looking to improve his skills on the court.

“I’ve been coaching for 15 plus years at various institutions around the nation and Brantly Thompson, when you combine character, his relationship with Christ, his unselfishness, his ‘team first’ attitude, his work ethic and his basketball ability, it’s almost impossible to match by any young man I’ve ever coached,” Eaker said.

While he hasn’t yet settled on his ultimate career path, Thompson knows that he wants to help others, inspire them to be their best and influence people in a positive way. His desire to do this was born out of his gratitude for so many people in his life that have forged him into who he is today.

“There are many people in my life who have helped me along the way, such as family, coaches, professors and friends. Probably too many to name them all.”

In addition to the time he invests into improving his game on the court and the time he spends to succeed academically, Thompson, like any other college student, also enjoys time with friends.

“My best memories at OBU so far would have to be late-night Whataburger runs during J-Term with my friends. That never gets old. I’m looking forward to making many more memories like that over the next three years.”

Thompson truly is embracing the full scope of what it means to be a student-athlete on Bison Hill. He relishes this opportunity and is doing everything he can to make the most of it. Even as a sophomore, he understands that this, too, will one day come to an end and he must do everything he can to enjoy it all while it lasts.

“What I’m going to miss most when I graduate would have to be the college atmosphere, being a student-athlete and spending time with my friends and teammates,” he said.

Basketball has truly taken Thompson to places he never thought possible. Whether it is his time on the court in high school, memories of all of those games and practices growing up, bonding with teammates here in college, or travelling to road games as a Bison, he has grown to value and love the sport and all that it means to his life even more since coming to campus over a year ago. While basketball has done this for him, and while it has helped him find his place at OBU, forge new friendships and make many lifelong memories along the way, the game itself will always be at the center of it all.

“I love how beautiful basketball is,” he said. “There’s so much more to it than putting a ball in a hoop. Through basketball, I’ve learned a lot, and I will continue to learn through great coaches and teammates.”