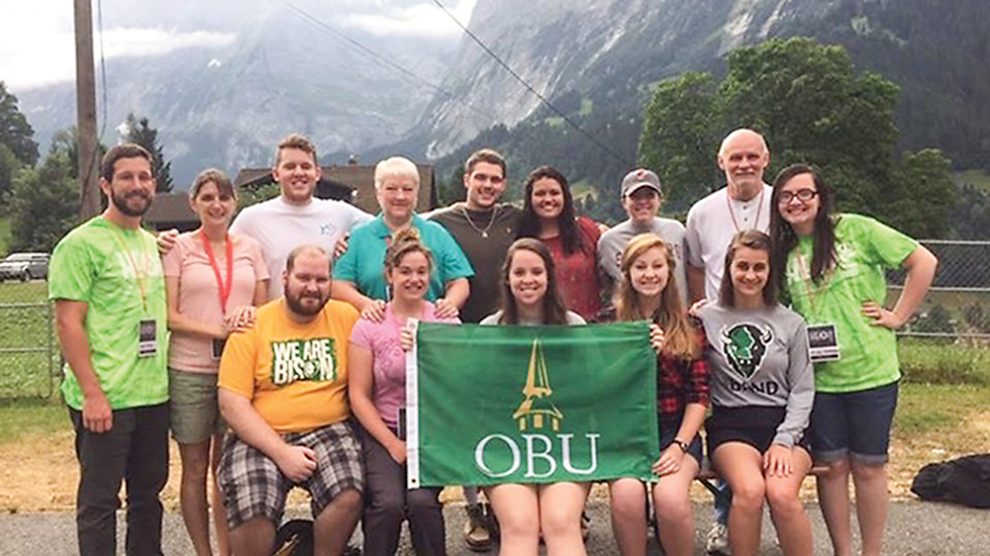 As many of their friends and family members were buying fireworks and grilling hot dogs to celebrate the Fourth of July back home, 11 OBU students and three mentors were celebrating our national holiday in Europe, preparing to share the gospel in Grindelwald, Switzerland, and Frankfurt, Germany.

Although some members of the trip knew they wanted to use their summers for GO Trips, that wasn’t necessarily true for Lauren Ledbetter, a junior from Ardmore, Oklahoma.

“Leading up to summer, I wasn’t sure what I was going to do. I prayed for something that didn’t have so much to do with me and my wants. I wanted to go somewhere that needed workers who love the Lord,” she said.

During their time in Switzerland, the team worked at Euroventure, an international youth camp.

“Our team acted primarily as small group leaders,” Ledbetter said. “We taught Bible studies, led small group discussions and invested in the students as much as possible.”

“Most of us had a partner from Hannibal-Legrange University, and some had European sponsors in their group. With them as our partners, we directed the small group time, were in charge of energizing our kids, helped with kitchen duty when it was our turn and helped the kids come up with a team chant and dance. We were also there as mentors for the campers, and also got to be
‘cabin moms and dads’ in each of our rooms. We wore a
lot of hats, but we were really able to minister to the
kids,” she said.

Some members of the group, including Bekki Briggs, a sophomore international business major from Blackwell, Oklahoma, had never experienced Europe before.

“It was very exciting for me to see everything and meet the people. Switzerland looked like the Alps in the ‘Sound of Music.’ We also found a patch of snow in July,” she said.

Even though the team was far away from home, Briggs said they were comforted by Germany’s somewhat familiar terrain.

“Germany reminded me of Oklahoma a bit because there was a lot of farmland growing wheat and corn, but there were also mountains and huge trees that we don’t have here,” she said. “Both places were absolutely stunning and breathtaking.”

“We were blessed with the opportunity to get to know and invest in students from all over the world,” Ledbetter said. “We saw students come to know the Lord, make life-changing decisions for their faith, and saw so many growing closer to God and learning how to serve and love Him more. The best part is that we are now able to pray specifically for the churches and students we encountered and now call friends.”

Kennemer said it is important for OBU students and employees to participate in GO Trips.

“Not everyone is meant to leave the country or even the state to reach people,” Kennemer said. “Some people are just meant to go next door. Jesus commands us to ‘make disciples’ as we are going, so if that means going around the world or across the street, it’s still necessary. I definitely think trips change your life. This is my second GO Trip, and I know both have forever changed me.”