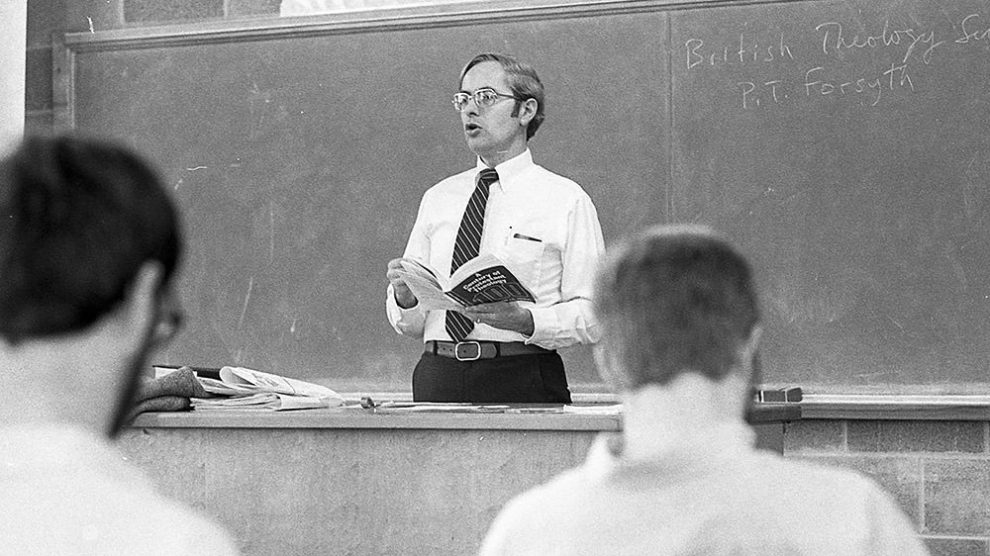 Dr. Warren McWilliams, Auguie Henry professor of Bible, sits in an office half-emptied of belongings, coffee in hand, exuding a spirit of welcoming and intentionality unlike any other. A few boxes here or there, he gradually packs up more things day by day in preparation for his retirement at the end of the spring semester.

But don’t think for a moment this seasoned professor is finished working. Though he has charitably offered up most of his library of books to his colleagues, McWilliams holds a wealth of knowledge within the library of his mind.

And the library is vast, along with his impact on thousands of students throughout 42 years of teaching for the Herschel H. Hobbs College of Theology and Ministry. Among those students impacted, Dr. Heath Thomas, ’98, now serves as dean of the Hobbs College.

“Like so many others, I can be counted as a former student of Dr. Warren McWilliams,” Thomas said. “His legacy, I believe, is found in the students whom he trained now serving in churches, leading on the mission field and teaching in universities, seminaries and classrooms in Oklahoma and around the globe. They carry with them something that Dr. McWilliams models: a deep and abiding commitment to Jesus and excellence in the intellectual life. I am honored to be part of his company.”

McWilliams, a 1968 OBU alumnus, majored in psychology with a minor in philosophy. He became interested in historical theology and systematic theology while attending Southern Baptist Theological Seminary. After earning his M.Div. at Southern, and continuing on to earn both an M.A. and Ph.D. at Vanderbilt, McWilliams taught two years at Stetson University in Florida before returning to Bison Hill to join the faculty at his alma mater. He soon began teaching a course which eventually became known as biblical ethics.

“In a theology class you might look at ‘humans are created in the image of God,’ and what does that mean to be in the image of God?” McWilliams said. “The ethics side is the practical application of theology: what could we do, empowered by God, not that we’re bringing the kingdom of God by ourselves, but, what could we do to make the world better … alleviating, lessening poverty, hunger, racial discrimination. I’m not an activist or a crusader, but I’m very interested in the practical application of ethics, and I do what I can.”

McWilliams received OBU’s Distinguished Teaching Award in 1986 and the OBU Alumni Association’s Profile in Excellence Award in 2010. He currently teaches theology classes and freshman Bible, a full circle to the courses he originally taught when beginning his teaching journey on Bison Hill.

M*A*S*H, Anyone? (Theology of Pop Culture)

Many former students and colleagues are quick to remember McWilliams’ nearly-trademarked affinity for the TV show “M*A*S*H,” which he often uses for teaching illustrations. However, his enjoyment of popular culture predates and extends beyond the 11-season run of his favorite series.

He grew up reading the comic strips in newspapers and watching Saturday morning TV shows. And though he claims to have a “blind spot for contemporary music,” McWilliams said he has come to appreciate music through his family’s musical talents.

“Across the years, I’ve dabbled in what I would call the theology of popular culture,” he said.

Along the lines of Robert Short’s “The Gospel According to Peanuts” and “The Parables of Peanuts,” a book on sermon illustrations from Dr. Seuss became one of McWilliams’ first publications. He later became interested in “M*A*S*H” and wrote papers on the ethics and theology of the show. One article reached a national publication.

“[In] the old idea of apologetics there are questions, concerns or objections, and then Christianity offers the answers. I’ve found that pop culture offers a very good statement, a concern or an issue.”

Epistolary Theology and the Lost Art of Letter Writing

Along the way, McWilliams became interested in a broad movement known as narrative theology.

“A lot of contemporary – at least Protestant – theologians talk about the importance of narrative, story, and communicating the Gospel, interpreting the Bible.”

His interest in letters and the influence of “The Screwtape Letters” by C.S. Lewis led him to write “Dear Chris: Letters on the Life of Faith,” published by Baylor University Press.

The book focused on fictional correspondence between him and a former student, who came back to homecoming five years after graduating. This was prior to email, so they corresponded through letters after reconnecting at homecoming. He dedicated the book to his past, current and future students.

To create an illustration for a children’s sermon at University Baptist Church in Shawnee, McWilliams asked his wife if she kept any of the letters he sent her throughout their marriage and dating. Using a box of hundreds of letters he wrote her and another box of hundreds of letters she sent him, he was able to make his point: “I wanted to describe the Bible as God’s love letter to His people.”

The Issue of Suffering

“Suffering is the biggest professional and practical issue of my entire life, academic life at least. It’s part of who I am. I’ve been intrigued by the issue of evil and suffering for a long time,” he said.

Thinking back to his honors project in college, McWilliams recalls writing a paper on research he conducted by administering psychological exams to children with terminal diseases at a nearby hospital. He recalls while he was in seminary, listening to sermons from his pastor on how a Christian handles the loss of a child, having personally experienced the death of his own child from leukemia. This event reinforced McWilliams’ interest.

McWilliams has written many books on the topics of evil and suffering including “Where is the God of Justice? Biblical Perspectives on Suffering,” “Fear No Evil” and “When You Walk Through the Fire.”

“The death of my wife happened a few years ago … you’ve got the book learning and the theoretical stuff, and then you have the reality to deal with,” he said.

Wisdom, Life and Other Matters

McWilliams has written lessons for Lifeway (formerly the Baptist Sunday School Board) for more than 30 years. Reflecting on how he’s maintained the writing job for so long, he said his daughters and wife have suggested his writing must be decent.

“Both of my daughters were English majors at OBU. It’s a scary thought to have them look at anything I wrote,” he said.

Another possible factor may be McWilliams’ work ethic to finish writing assignments on time.

However, a high work ethic comes with a warning from McWilliams.

“The challenge for everybody, not just me, is balance,” he said. “You cannot neglect your family or church. I could be a pretty good loner, but there’s a lot of difference between solitude and being lonely.”

McWilliams encourages everyone to pursue friendship.

“I’ve always had some really good friends,” he said. “I could track – at least through my teen years on – a person or two outside of my family who was my best friend. I always have some people that are really close and share interests. I use that phrase in Proverbs: ‘Iron sharpens iron.’”

“I’ve enjoyed what I’ve taught, and I’ve enjoyed the students, he said. “I have a deep respect for OBU.”

McWilliams said one of the things that has kept him here for 42 years is the collegiality – the friendships within his department, as well as outside his department.

Dr. Carol Humphrey, professor of history, is one such friend and colleague.

“Through the years, I have always found Warren to be supportive and encouraging to me as a teacher and a researcher. I have always been amazed at how much he clearly loves teaching and encouraging his students to grow as individuals so that they can graduate and impact the world,” Humphrey said. “Warren has been a fantastic professor and a wonderful colleague at OBU, and he will be greatly missed when he retires this year.”

McWilliams recently served as the interim pastor at University Baptist Church. He hopes to continue reading a great deal in his retirement, and the rest of his time is up in the air.

“Six weeks following retirement, I may latch on to something that’s never crossed my radar screen,” he said. “I bore easily. I may learn how to sleep in. Or, I might be teaching an 8 a.m. freshman class. Who knows?”

Read a 2010 Profile in Excellence article on Dr. McWilliams.