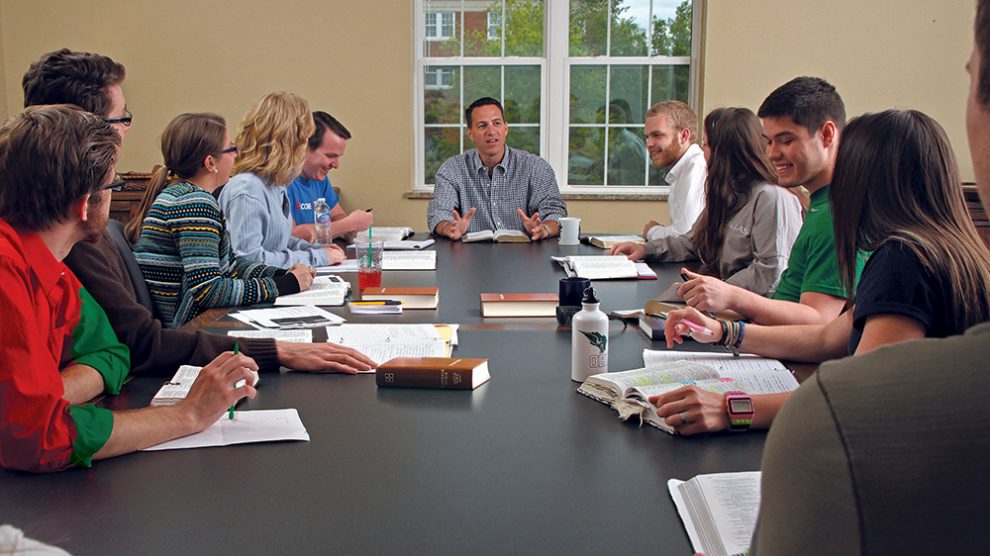 The Promising Teacher Award is presented to a junior faculty member who has taught at OBU less than six years and has demonstrated outstanding potential as a teacher.

Dr. Scott Pace grew up in Wilmington, North Carolina. He spent his college years at North Carolina State University, beginning as a chemical engineering major then completing an accounting degree in 1997. He spent two years as an accountant at a large corporation, then managed a small business. He found success, but knew he was made to do something more.

“Ultimately, I just wasn’t fulfilled,” he said. “God had done a lot in my life my junior and senior years in college. I began to discern His call on my life to vocational ministry.”

He and his wife, Dana, soon traveled to Southeastern Baptist Theological Seminary in Wake Forest, North Carolina. He served full time in a local church while completing a Master of Divinity in 2002 and continued into the Ph.D. program. God then moved him to First Baptist Church, Daytona Beach, Florida, as teaching pastor and administrator. He served there for three years, completing his Ph.D. in Applied Theology in 2007.

“I didn’t get my Ph.D. to teach,” he said. “I just wanted to be the best prepared pastor and Christian I could be.”

He soon received a call from Dr. Mark McClellan, dean of OBU’s Hobbs College of Theology and Ministry, and Dr. Stan Norman, provost and executive vice president for campus life, concerning an open position at OBU. They received his name from Dr. Danny Akin, president of Southeastern. Pace did not seek out the position or apply. God simply opened the door.

“When OBU called, my wife said ‘if it’s ever something you might be interested in, you should see what’s involved.’ The position lined up with my experience, and it became obvious that God had this plan for us. I realized that working at a church, I could influence the people inside the church and in that community, but I now had a chance to impact students who could in turn impact hundreds of churches.”

He made the move to Shawnee in December 2009, joining the faculty as assistant professor of applied ministry.

“God really spoke to me through three things. First, the vision of the administration really stood out to me. Second, the communal, collegial feel here was right, too. Third, seeing and meeting the students, and having the opportunity to pour into their lives, was so exciting to me.”

Even after transitioning to the classroom, Pace continues to fill the pulpit. He has served interims at First Baptist Church in Edmond; Bethel Baptist Church in Norman; and First Southern Baptist Church in Del City. He has also served as camp pastor at Falls Creek, led many youth camps and “Disciple Now” weekends, and led prayer for the Oklahoma State Senate and at an Oklahoma City Thunder basketball game.

Pace says the most satisfying part of his job is “seeing the lives of students change and transform.” To that end, he established The Preachers Guild on campus to allow students the opportunity to preach to peer preachers, receiving evaluation and encouragement from one another.

“I want them [students] to really learn how to passionately and intimately walk with Jesus, because their personal walk will go beyond whatever arena of life or vocation they serve in. I want them to understand their education and vocation is a ministry opportunity for them as a believer and as a part of God’s church. That gives purpose to what they’re studying, why they’re studying it and what they’re going to do as a career, if they view it as part of God’s mission.”

Aaron Fullbright, a 2014 OBU graduate, was Pace’s student and currently serves as Associate Youth Pastor at Immanuel Baptist Church in Shawnee. He credits Pace with making a tremendous impact on his life and ministry.

“No one else has impacted my life in regards to ministry more than Dr. Pace. He taught me what it means to do ministry and to love people. My prayer is that I will be able to relate to students and families the way he is able to relate to them. He helped me understand my calling to both the church and my family.”

During OBU’s 2014 Spring Commencement, Pace was honored with the University’s Promising Teacher Award. In presenting the award, OBU President David W. Whitlock said Pace has earned the admiration of his peers, his students and the administration.

“Dr. Pace exemplifies Christ-like character, passionate service to the church, and innovation in scholarship,” Whitlock said. “He has taken the applied ministry department to one of the fastest growing and healthiest programs on campus.”

On being selected, Pace said, “It’s definitely an honor. When you look at the names of previous winners, it’s a humbling experience. Hopefully, it means I’m being faithful with the opportunity God has provided for me here at OBU.”

Fullbright was not surprised at his mentor’s recognition. “Over my four years at OBU, the number of ministry students exploded. Besides the Lord, I don’t think anyone deserves more credit than Dr. Pace. People want to be a part of the vision the Lord has given him, and you see many of his students excelling in the ministry.”

The award means a great deal to Pace. Yet, if you know him, then you know that the words of this former student and others like him, voicing the impact he is making in their lives and ministries, well, those words mean even more.