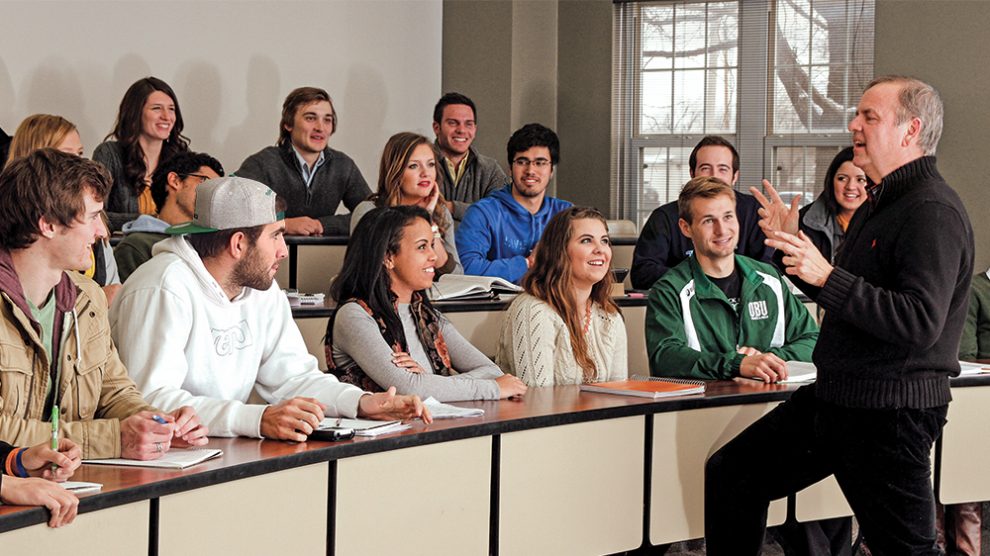 The Distinguished Teaching Award is the highest honor for OBU faculty and is presented to an outstanding faculty member who has taught at OBU for five consecutive years or more and who has exemplified those characteristics of superior instruction delineated in the “Commitment to Excellence.”

Visit campus any time in early December and you will hear about it. Students and employees mark their calendars well in advance to make sure they do not miss it. They arrive early to get a good seat and to make sure they even have a seat at all.

No, he does not want to be known only for Christmas Chapel. But he does not seem to mind it all that much, either. Reeder is so well known for the annual event, some students might be surprised to learn he is also an award winning professor of business, held in the highest regard by faculty and administration, or that he chairs the faculty council.

So it is for a man who is brilliant, yet personable, committed to academic excellence, yet passionate about building relationships, focused on student outcomes, yet able to make a standing-room-only crowd in Potter Auditorium roar with laughter.

Dan Reeder is passionate about students and life. He believes strongly in the God-given potential in everyone and works tirelessly to unlock that within each student who enters his classroom.

Reeder graduated high school in Depew, Oklahoma, then earned both his bachelor’s degree and MBA from the University of Tulsa before earning his doctorate at Oklahoma State University. He joined the OBU faculty in the Paul Dickinson School of Business in 1991.

“I was a teaching assistant at Oklahoma State and had interviewed out of state, when I saw the opening at OBU,” he said. “When I was offered the position, it was a great fit for me. The students here are fantastic and are truly going to make a difference in the world. The faculty here are tremendous as well. I was drawn to the collegiality on campus and the opportunity to discuss ideas openly, disagree with one another, yet still work together and respect each other.”

Reeder wants his students to learn sound business principles and finance, yet he also has other goals in mind. “I want them to learn to think on their feet,” he said. “They also need to learn the importance of how to treat people, especially those that are different from them. I want my students to know how to work with people, value people and treat people the right way.”

Reeder received the University’s Distinguished Teaching Award during the 2014 Spring Commencement, OBU’s highest award for any employee. In presenting the award, OBU President David W. Whitlock said Reeder inspires and encourages students outside the classroom as well, being there to guide them along the way to academic, personal and spiritual growth.

“As a professor, he is committed to developing Christian business leaders,” Whitlock said. “Former students laud his teaching and his ability to make a finance classroom fun.”

The award follows other recognition received while at OBU including the Promising Teacher Award in 1995 and the Indian Fellowship Award from the United States Department of Education. In addition to these honors and awards, he has filled the role of both interim dean and dean for the Paul Dickinson College of Business.

“It’s an honor to be mentioned in the same breath with previous award winners,” Reeder said. “It’s nice to be considered and recognized. I’ve had the opportunity to work with many OBU legends, such as Max Brattin, James Hurley, Carolyn Cole and Mary Kay Parrish, to name a few. They’ve inspired me and shown us all what true excellence really means. I’m humbled to walk in their footsteps.”

When asked why he thinks he was selected for the award, he focused on the students. “I love what I do. I have a great job and great students. This award means so much, because it shows the value of how I interact with them and the importance I place on them.”

The Most Wonderful Time of the Year

A decade and a half has passed since Reeder was first asked by music faculty member Mary Kay Parrish to serve as the master of ceremonies for Christmas Chapel. “I love hosting the Christmas Chapel, because it allows me to draw on my creative side. I love the things I can talk people into doing for it. It’s fun to show the hidden talents of our faculty and administration, which always surprises everyone.”

Whether it is professors rapping, or a university president ringing a cowbell, Reeder has a way of bridging the gap between students, faculty and administration, bringing everyone together for that one glorious hour to live, laugh and celebrate.

Christmas Chapel has developed its own traditions over the years, such as corporately singing the famous Oklahoma jingle to B.C. Clark’s anniversary sale; hilarious parody videos featuring students and faculty; and the biggest tradition of all, the annual host, Reeder himself.

While he may be best known for his Christmas Chapel duties, Reeder’s impact is felt across campus in so many ways: through his passion for students, finance, and helping others enjoy themselves, whether sitting in class, working on a project or laughing together on the first Wednesday in December.