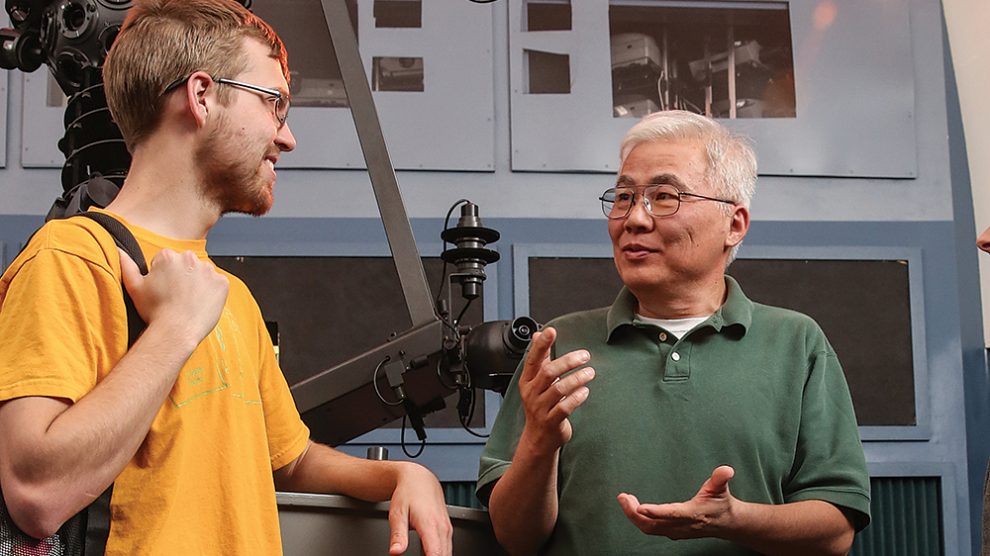 One man is connected to all three, working for two and exploring the other. Through his years of experience in NASA research and three decades of teaching, he unlocks the mysteries of space for students on Bison Hill.

Most students have heard of Newton’s laws of motion, developed by famed physicist, Sir Isaac Newton. The first of those laws states that an object in motion tends to stay in motion while an object at rest tends to stay at rest.

So it is with Dr. Albert Chen, professor of physics and 2015 recipient of the University’s Distinguished Teaching Award. For 29 years on Bison Hill, he has remained in motion, always moving ahead, convinced that forward motion improves his students’ experience, while rest leaves them behind the curve.

“Science is an important part of our lives,” Chen said. “Society moves so fast with scientific development and discovery, it’s amazing. Now, if you don’t catch up and know what’s going on, it’s kind of dangerous. It’s like swimming up a stream. You have to work hard to move forward, or the current will push you back.”

Chen was born in Taiwan where he discovered science at a young age. Receiving encouragement from a teacher to pursue his strong interest in science, he began studying physics and found an aptitude for the combination of math and scientific principles.

After earning a bachelor’s degree at Chung-Wang Christian College of Science and Engineering in Taiwan, he applied to graduate school and was accepted into the doctorate program at Baylor University in Waco, Texas, where he also served as a teaching assistant.

A Call to Teach

Shortly after Chen began teaching at OBU in 1986, he received his first student feedback surveys. After discovering the surveys contained both positive and negative feedback, Chen reviewed them with a colleague who had been teaching for a number of years. The experienced faculty member offered him encouragement and advice, helping Chen realize that the results actually indicated he was doing a good job because he was challenging his students to excel.

Chen also had the unique opportunity to receive student feedback from his own children who attended OBU, providing him a totally new perspective.

“They would tell me if there was something I should change,” Chen said. “One time my daughter told me I was too serious and I needed to slow down and smile more. I thought I was smiling. But I found out that what I think is a smile, the students don’t think is a smile. So I’ve worked on that.”

Chen enjoys teaching at OBU and working closely with students to help them prepare for the future.

“OBU is a wonderful place and it’s a pleasure to teach here,” he said. “When you get to know your students and see the change in them, you feel like you’ve accomplished something special.”

Chen believes his students benefit most if he is both encouraging and challenging at the same time. He believes strongly in the quality of education students receive in math and science at OBU, noting they are well prepared for whatever the next step may be. He encourages all of his physics students to attend graduate school and advance their education, noting his students have been highly successful in pursuing advanced degrees.

“Students who receive degrees from OBU find they have many options. Those with physics degrees can get into almost any engineering program they want. Schools of engineering prefer physics students because they have a strong math background and they work hard. They have to work hard at OBU.”

He also saw the fruits of that preparation and character development in the lives of his own children. His second son graduated from OBU with a chemistry degree and went on to earn a master’s degree from Virginia Tech. He is working for a pharmaceutical company in Norman. His daughter graduated with a biochemistry degree from OBU two years ago and is studying medicine at OU Medical School.

Chen believes there is a powerful difference in OBU as compared to other universities because of the sense of community among both current students and alumni.

“My daughter thoroughly enjoyed OBU and made a lot of friends here,” he said. “During her first year in medical school, she encountered quite a few OBU alumni as upperclassmen. They treated her like a member of the family and told her to let them know if she needed any help.”

To Infinity and Beyond

With a special interest in space physics, Chen served as a NASA Summer Research Fellow at Stennis Space Center in Mississippi; Johnson Space Center in Houston, Texas; and in the engineering research division of Dryden Flight Research Center in Edwards, California. He worked on projects at Kennedy Space Center in Florida, and his research has included Martian dust simulation studies and researching the design of high altitude diffusers for space shuttle main engines.

“My professor and mentor at Baylor worked at NASA for many years and maintained a close relationship with NASA,” he said. “As a result, I was able to participate in a grant studying interplanetary dust particles. When the project finished, I applied for a summer faculty fellowship sponsored by NASA. That was a two-year study, but I’ve applied many times and been able to continue.”

His work at NASA opened his mind and expanded his knowledge base, but he is most gratified to share those experiences with his students on Bison Hill. They are interested in learning all kinds of things about space, so he challenges them to consider issues associated with living in a space environment, and encourages them to consider entering the emerging field of space medicine.

“You can’t drink out of a bottle in space, as the air bubbles will cause you pain,” he said. “Also, your bones no longer support your body so they lose calcium in space. This is an area we don’t know enough about and we need good people in this field. Remote medicine also is important in space exploration. When someone gets sick on a space station, doctors try to provide a diagnosis through a video feed from earth. We can use this same technology between two locations on earth, so if some remote area doesn’t have a doctor, a doctor could diagnose the patient from far away.”

A Bright Future for Science and Math on Bison Hill

Chen foresees continued success for his students, with even greater potential in the years to come. He is excited about the future expansion and rebuild of W.P. Wood Science Building, as well as the impact the improvements will make on students and faculty.

“OBU had a good reputation in the past, but it’s even better now. We are doing a better job because of the provision of better equipment and more faculty to teach these subjects. Over the years, the number of science students has increased at least twofold and now we need more space,” he said. “We need to expand so we can serve more people and also expand the message of what Oklahoma Baptist University is really doing. We have a Christian message and a strong program that can generate a lot of good people for society, and I think that’s really important.”

Chen loves physics, enjoys solving problems and savors the opportunity to learn new things. Yet, his passion is for his students and for the people they will impact through science and discovery.