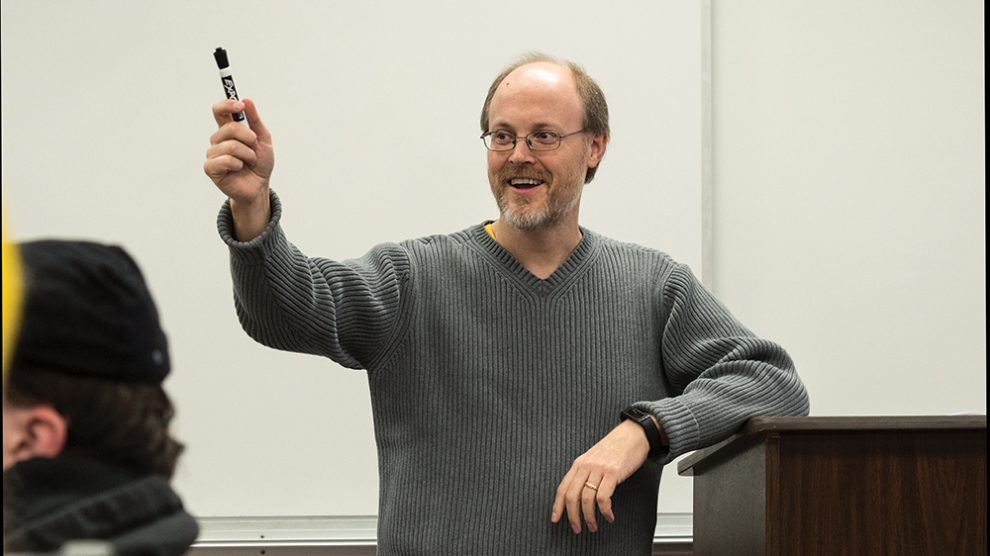 “There is nothing in my job I love more than seeing a young man or woman thrive as a Christian academic, someone who combines academic excellence with a life worthy of the high calling of God in Christ Jesus.”

When Dr. Tawa Anderson received OBU’s Promising Teacher Award during Spring Commencement 2016, it came as no surprise to those who know him. Hard working, compassionate, intelligent, driven and fervent for the Gospel, Anderson has made a significant impact on the campus community in the five-and-a-half years since his arrival. As assistant professor of philosophy and director of the honors program, he challenges students to expand their horizons, reexamine their perceptions, and forge a worldview centered on Christ and the Bible.

Anderson was born and raised in Sherwood Park, Alberta, Canada, a suburb of Edmonton, Alberta’s capital city. His mother was a teacher and his father owned a forensic consulting engineering company, demonstrating the value of education and hard work to him and his three older siblings.

He earned a Bachelor of Arts with honors in political science at the University of Alberta and a Master of Divinity at Edmonton Baptist Seminary. He then served as English pastor at Edmonton Chinese Baptist Church from 2001-2008, and part-time as a Baptist chaplain at the University of Alberta. He and his family then moved to Louisville, Kentucky, for three years while he completed a Doctor of Philosophy at the Southern Baptist Theological Seminary, focusing on worldview and apologetics.

Anderson then began searching for the next step in God’s plan, applying to more than 50 different teaching positions in colleges and universities throughout North America and overseas. A close mentor in Edmonton, who happened to be from Oklahoma, had encouraged him to pursue a position at OBU if he ever had the opportunity.

“The job description at OBU fit my character, interests and academic expertise perfectly,” Anderson said. “I was thoroughly excited about the possibility of becoming part of the faculty here.”

Anderson teaches a broad range of courses in the philosophy department including philosophy of the mind, epistemology, and contemporary apologetics. He also teaches courses in the Master of Arts in Christian Studies program, as well as the J-Term Christian worldview course designed for freshmen. He has served as director of the honors program for the past two years. He helped launch the University’s philosophy forum in 2012, an annual series of lectures and panel discussions on relevant and contemporary issues and topics.

“My time at OBU has been rewarding, challenging and fulfilling,” he said. “I have had the opportunity to start new initiatives, develop new curriculum and set a new vision for program review. It has been beyond my expectations in every respect. My family has become integrated into school, church and community life here, and we consider Shawnee home.”

Passionate about contemporary Christian philosophy, Anderson is particularly fervent about philosophical apologetics – explaining and defending the truth of Christian theism in the face of cultural and academic objections, doubts and challenges. He leads groups of students every January to an annual apologetics conference in New Orleans and to a regional philosophy conference every spring. He serves as the faculty mentor for the student-led philosophy club and the soon-to-launch student-led apologetics club.

“Given the multi-career nature of this generation and future generations, it is more important than ever that we, faculty and students alike, envision college as a preparation of the whole person as a Christian citizen, ready for whatever comes their way down the road,” Anderson said. “I want my students to learn that all truth is God’s truth. I also want them to put Christ first. It is easy to focus on academic life and community and social life to the point where church involvement and personal devotions take a back seat. But they can’t let that happen. Likewise, I teach them to strive for excellence in all things. Habits they form now will shape the rest of their lives. I challenge them to not settle for mediocrity.”

Anderson’s students appreciate the way he invests in their lives and his approach to teaching, learning and spiritual development.

Chandler Warren, a freshman from Poteau, Oklahoma, is a double major in religion and philosophy and has taken several courses with Anderson, including philosophy and contemporary Christian apologetics.

“Dr. Anderson cares about sharing complex topics in a simple way,” Warren said. “He wants the class to bring their own perspective, thoughts or questions into the discussion to develop a well-rounded and diverse view of the topic. He also invests in students’ lives in the classroom, in his office, and in his home. He invites students to be a part of his life, and in turn, I think his students respond by giving him part of theirs.”

“Dr. Anderson stands out in terms of his personality and teaching style, and his door is always open for students to drop in to chat or to discuss class work,” Dean said. “His ability to constantly draw topics back to their foundation in our faith has been eye-opening on countless occasions. His commitment to his faith, his students and his discipline is made apparent in each class.”

Anderson has been married to his high school sweetheart, Vanessa, for 20 years. They have three children, Mataeo, Alethea and Keilani. He enjoys spending time with family, reading and cycling. He loves music and plays piano, guitar and bass guitar on the worship team and for youth worship at Temple Baptist Church in Shawnee.