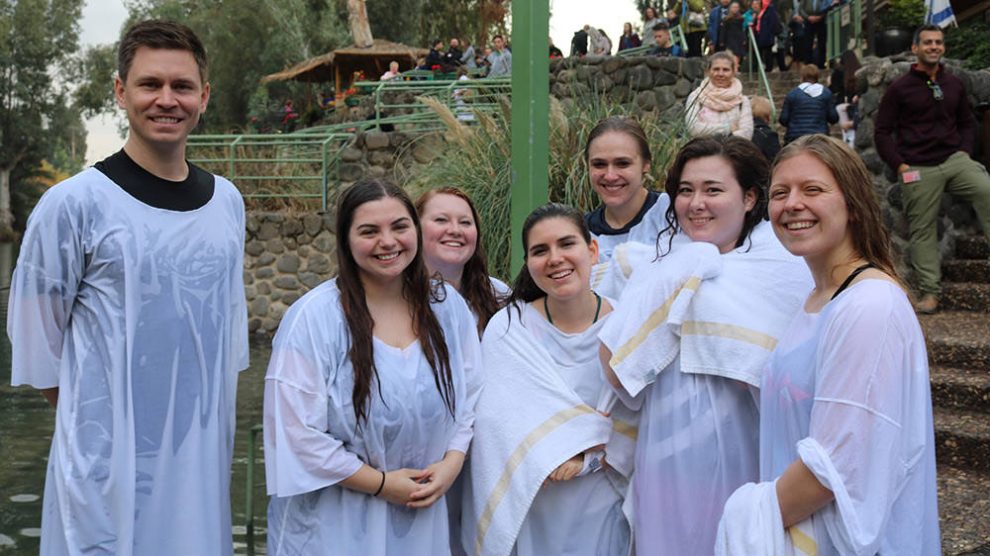 Students taking trips around the  world are common on Bison Hill. Global Outreach  (GO) trips take place every summer, J-term and spring break, with 200 to 300 students and mentors traveling to all corners of the world, reaching out to those who are in need of love and service. However, instead of going with a specific mission to serve a people group, three OBU student journalists took advantage of a unique opportunity to travel to Israel to observe the people, understand the nature of the modern state of Israel, witness the effects of conflict, and view it all through the eyes of a journalist.

When students Chelsea Weeks and Anna Dellinger, along with December 2017 graduate Alyssa Sperrazza, left for Israel Dec. 30, 2017, they weren’t sure what to expect. They traveled as part of a Passages Israel trip with a special agenda focused on journalism and reporting, joining 29 other college students from around the nation.

Over the past three years, more than 100 OBU students have participated in Passages trips. While those trips focus on biblical sightseeing, this trip was different. It was built with journalism students in mind, with a tailor-made agenda fitting their needs. This included seeing most of the “must-see” sights of biblical Israel, but also focusing on the modern Israeli-Palestinian conflict and included an assignment to complete a compelling, internationally relevant news story as part of the trip’s curriculum.

The students were recommended by Holly Easttom, assistant professor of journalism at OBU and the adviser for the student-created weekly newspaper, “The Bison.” A group called the Philos Project, which promotes positive Christian engagement in the Middle East, co-sponsors “Passages” trips to Israel in order to give “Christian college students with leadership potential a fresh and innovative approach to experiencing the Holy Land.”

This trip was unique, in that it took the standard Passages itinerary and altered it specifically with aspiring journalists in mind. The specialized program was planned in conjunction with Jerusalem Dateline, a news service of the Christian Bible Network.

Senior Anna Dellinger, who graduated in May with a degree in news and information, and who served as editor-in-chief of “The Bison” this spring, was unsure of what to expect upon arriving in the land of King David.

“While I thought I knew some things about Judaism and ancient Israel, I had no knowledge of Israel as a modern state,” she said. “I learned about a people that has overcome many exiles, wars and transitions of world power. I also learned a lot more about the historical context for the Bible stories I know so well. It made my faith more tangible. As far as journalism is concerned, I learned a lot about the importance of being ‘on the ground’ and not trusting everything I read in the news. Israel is often portrayed extremely negatively in the news, but from what I learned, most of that news is one-sided or lacking in crucial pieces of truth.”

Dellinger was humbled and excited for the opportunity to cover international news while experiencing the Holy Land.

“The opportunity was not one I could pass up,” she said. “Traveling is one of my passions, so this definitely fit the bill. On top of that, it is the birthplace of Christianity, and I wanted to learn more about the foundation of my faith. The aspect of it being a journalistic trip was an added bonus, because I want to be a journalist in another country. I would have deeply regretted not going on this trip.”

Alyssa Sperrazza, who graduated in December with an interdisciplinary degree in news and information, cross-cultural ministry and political science, saw this trip as a dream come true.

“The trip was pitched as a somewhat ‘intro to international correspondence’ which is something I’m wanting to do during my career as a journalist,” Sperrazza said.

“It’s hard to teach international correspondence from a classroom in Shawnee, Oklahoma, so I knew this would be an amazing learning experience, and I also wanted to see if this was something I really wanted to pursue. This was an incredible opportunity to learn how to report in a foreign country, specifically one that is in the middle of a lot of conflicts right now. I knew I couldn’t pass up an opportunity to report in the Middle East, all while getting to see the Bible up close.”

Weeks, a junior news and information major and current news editor for “The Bison,” learned a great deal during the trip about the professional art of news gathering.

“The purpose of the trip is to take Christian students and give them the ability to tour the Holy Land,” she said. “For me, there was this battle going on between religion and occupation. I wanted to do this to better my resume and portfolio, but I also saw it as a chance to strengthen my faith and my walk.

Sperrazza, who served as editor-in-chief of “The Bison” before graduating, was deeply affected by her visit to the Holy Land.

“I had heard from people who had gone to Israel that it makes the Bible ‘come alive,’ and they weren’t lying,” she said. “It was amazing to be able to walk along the ruins of the Temple or stand on top of the Mount of Olives or along the shores of the Sea of Galilee. To be able to walk where Jesus walked is an incredibly humbling experience.”

“The most rewarding part was either Jerusalem’s old city or the Jerusalem market, because we got to experience the culture of that,” Weeks said. “We also got to experience a Shabbat dinner. Experiencing another culture that is part of the roots of your faith opens your eyes and helps you decipher everything that you learn.”

The group toured the major sights expected on a trip to Israel. They took in the Sea of Galilee, Jerusalem and the Mount of Olives. They visited the Jordan River, where some members of the group were baptized. They visited Gethsemane, and many other locations. They were inspired in their faith as they walked the same places where Jesus and His disciples walked and where so many stories from the Bible took place.

Yet, they were also powerfully impacted by modern day Israel.

“I was surprised by the vast amount of creativity and ingenuity displayed by Israel,” Dellinger said. “This tiny country in the Middle East is one of the world leaders in technology, small business startups, water engineering and agriculture. They don’t have much opportunity to export crops or items produced by factories, so they export ideas and technology. It is very impressive.”

Sperrazza said her perspective changed dramatically on the real status of Middle East relations and the Arab-Israeli conflict.

“From a journalistic viewpoint, it was incredibly eye-opening. Western media has a tendency to report about the Middle East and only show the negative stuff or amp up the conflict to make it more ‘entertaining,’ but what we saw contradicted a lot of the coverage I’d seen. People weren’t that concerned with President Trump announcing the move of the American embassy and there were a lot of cases where Palestinians and Israelis were friends, not enemies fighting with tanks and guns. Of course, those things do happen and we were lucky enough to go along the Gaza Strip to see what it’s like to live in a constant war zone, but the everyday life almost caught me off guard.

“I learned very quickly that the reality of Israel, Palestine and the surrounding regions is much more complex and not at all black and white when it comes to who is right and who is wrong. I didn’t become an expert on the Israeli-Palestinian conflict in the short 10 days I was there, but I definitely came back home with a greater understanding of the work that has been done and how much work is yet to come.”

The people themselves were a surprise for Weeks.

“One of the biggest surprises for me was how generous the people are,” Weeks said. “We went to the Golan Heights and saw a hospital where Israel was providing medical care. We also went to the Gaza Strip. One thing I learned about Israel is that although Hamas has overtaken Gaza, Israel still sends 400 trucks a day into Gaza to give them food, water, supplies and electricity even though Hamas sends missiles and rockets into these towns. Israel still helps feed the people in Gaza even when their own people won’t.”

Sperrazza also was startled by the contrast of reality versus some of her errant misconceptions.

“It sounds naive in hindsight, but I was surprised by how normal life was in Israel,” Sperrazza said. “I was expecting a place that was really tense, especially since we went so quickly after President Trump’s embassy announcement, but what I saw was just people going about their everyday lives, completely ignoring that fact that rockets could launch and hit their location in under a minute. It was really eye opening and taught me something I will take into every place of conflict I go during my career. That is, despite the war, life goes on. In a way, the normalcy of the everyday life is how people fight back without ever raising a weapon.”

Sperrazza, who now lives in Washington, D.C., and works at The Pulitzer Center, believes that her education gleaned at OBU prepared her not only to experience this trip but also to learn the maximum amount possible and apply it in practical ways in her career.

“I have to give so much credit to our journalism professors, Holly Easttom and Stephen Draper,” she said. “I would never have believed you my freshman year if you told me that in less than four years, I’d get to write my first international article. They both have done a phenomenal job in the journalism department and I can’t wait to see how they continue growing it and pushing out incredible writers, filmmakers and photographers. I can say with absolute certainty that, without their guidance and teaching, I never would have been equipped to go report in Israel.”

Dellinger also believes her courses and experiences on campus at OBU helped to ready her for this experience.

“One of the most noticeable key ideologies from OBU that guided my entire Israel experience was integrating faith with learning,” she said. “In learning about Israel, I was able to pick up historical, political and geographical knowledge and combine it with my knowledge of the Bible and the Christian faith to create a more enriching and memorable learning experience. My experience in writing for “The Bison” and being involved in different types of multimedia news classes prepared me to better document my experience and come away with new perspectives.”

Whether students are called to trips such as this one, in order to hone their professional skills, or trips that are intended to serve people groups around the world, Weeks encourages current and future students to take advantage of the opportunities in front of them.

“Going on trips like this broadens your horizon. It stretches your mind,” she said. “You’re put outside of your comfort zone and forced to do something you weren’t comfortable with before. It gives you the chance to learn new things about other cultures and to have those memories shape you as a Christian, as a worker and as an American.

“This experience has made me grateful for so much, because I don’t have to live in fear. When you see people who are constantly under the influence of fear, it makes you feel good that you don’t have to live that way; but you also feel a little guilty. It makes me want to be more active in my community and also to be more willing to go other places. It really opened my mind.”