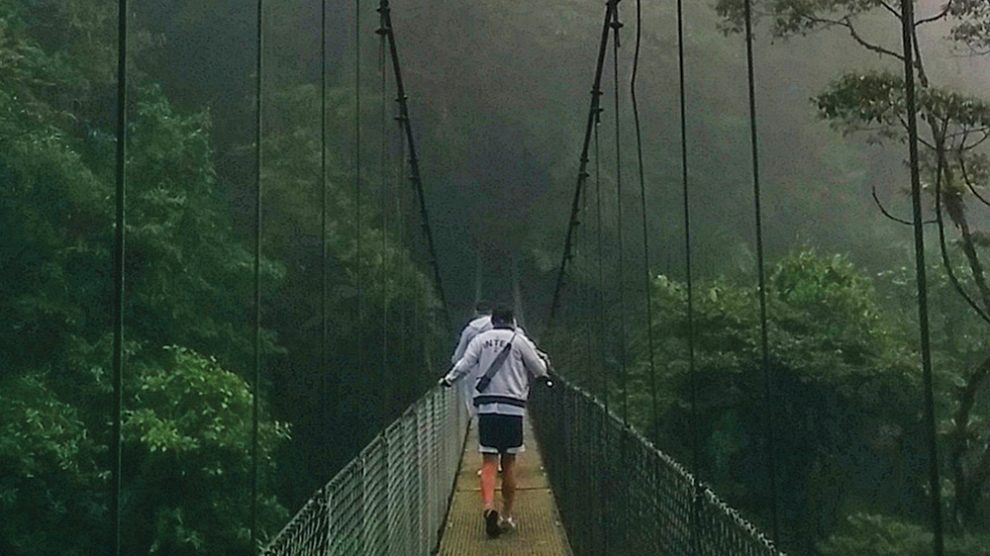 The people of Costa Rica have adopted these words and turned them into a signature phrase, which can act as a greeting, a goodbye or a simple statement of how one is doing.

During the month of January, Travis DeWall and four other students, along with OBU Associate Professor of Biology Dr. Dale Utt, traveled to Costa Rica to experience its biological diversity and tropical ecology first-hand. DeWall shares their journey through his eyes, detailing how their perspectives and understanding were forever changed, and how the local phrase “pura vida” (translated “pure life”) came to define their experience.

After arriving in Costa Rica’s capital city San Jose, we boarded a van that took us to a small town on the banks of the Rio Sierpe. Our van ride passed rolling terrain – a pleasant disparity from the stretching flatlands of my native western Oklahoma – but the lush rainforests did not come into view for quite some time. As we gradually made our way out of the sprawl of San Jose and toward our river destination, the land began to thicken. Dead fields, once cleared to create farms that had long since been abandoned, gave way to scraggly outcrops and tufts of trees. The evening went on and we encountered seemingly endless rows and columns of palm trees. They were pristinely organized and their faultless placement was beautiful, a fact I would reflect upon later in the trip.

In the morning, following breakfast at a riverbank café, we loaded our supplies onto a small boat and set out toward our first destination. The sunrise was astounding. The sky and water were splashed with light oranges and pinks of the sun just making its way over the trees that stood on either side of the river. In the water, a perfect reflection of the surface was visible, and it was then, through the beautiful symmetry and the brilliant scene around us, that we gained the first glimpses of the tropical paradise we had imagined when we signed up for the class.

We stopped at one point and disembarked on kayaks to navigate the mangrove forest, whose sprawling roots twisted and tangled on either side of narrow passes between each trunk. When our party once again boarded the boat, we were quickly at the mouth of the river. To our right was the seemingly endless expanse of the Pacific Ocean, and to our left was the lush landscape of the Osa Peninsula with its towering trees that would have dwarfed any of the pines or oaks found in Oklahoma.

Our destination finally came into view – an unassuming lodge overlooking a small beach spotted with a few dark rocks. It was the research field station for Proyecto Campanario, a conservation effort focused on the protection of tropical lowland forests and first-hand education of tropical ecology. Its founders and current caretakers maintain the reserve’s natural state while providing students and scientists a place to learn and work. There are no roads built to the research station. The only way to reach it is to either drive to a nearby village and hike an hour along the coast or to arrive by sea as we did.

From the station, our simple cabins were a five minute hike up a twisting hillside path. Spider monkeys munched on fruit trees that lined the trail. The evening sun cast its rays upon the sea, which sparkled and shone in the light. The fronds of palms bounced up and down in the breeze and the ever-present sound of the tide on the shore was a constant companion.

Our daytime hours were spent with treks into the rainforest. These hours-long journeys were accompanied with lessons about tropical ecology by both our guide, Frenier, and Dr. Utt. We witnessed the tangling, shallow root system of the rainforest trees, being careful to not trip over their knotted jumble. We studied and perceived the fragile nature of the rainforest and the complicated ecosystem immersed in it. We saw the timidity of the tropical creatures whose life often depends on the ability to be unseen and unheard; experienced the astounding diversity of plant life and the strategies they employ to grow; and witnessed the spectacle that undisturbed nature could be.

It was at these times, after beholding a pair of scarlet macaws flying to a distant palm or crawling into the hollow of a massive tree to take a look at some sleeping bats, that I remembered those neat rows of palms in evenly spaced columns. They had somehow lost their original sense of beauty. Sure, they were organized and perhaps their uniform aesthetics were still pleasing to the eye, but their arrangement now appeared unnatural and lackluster. They were missing the wild and genuine – the “pura vida.”

After a stint at La Selva Biological Research Station in the northeastern lowlands, we departed for a lodge near Volcan Arenal, the youngest active volcano in Costa Rica. Our inn was situated with an observatory deck facing the volcano’s peak and overlooking Lake Arenal below. Our educational focus here was on the cloud forest and its difference from the tropical lowland rainforests we had just left. Cloud forests exist where the altitude is high enough that the clouds are actually near ground level, causing less rain but frequent drizzle. This sort of misty scene followed us to the Arenal hanging bridges, which were suspended sometimes hundreds of feet off the ground.

Our final drive returned us to San Jose, where we experienced urban Costa Rican life in crowded markets, local cafés and other hidden gems, including a curated fair-trade boutique where native artists and artisans sold pieces of traditional and modern work.

It is a difficult concept to grasp, that a country nearly two and a half times smaller than Oklahoma can support five percent of the total species on our planet. That means five percent of Earth’s species exist on three hundredths of a percent of the planet’s surface. That would be like managing to fit a car onto the face of a single quarter. And yet, even an environment so dense with animals, so overgrown with plants and trees that scrape the sky, is vulnerable to the actions of people and the forces of nature.

There is no way to truly understand and respect the tropical rainforest without experiencing it yourself. Words cannot do justice to the whole, both the massive and the minute. Fortunately, OBU and its passionate faculty provided an opportunity for us to glimpse the complex nature of a place so foreign to our usual lives.

Our journey truly fulfilled OBU’s mission, just like an evangelical mission to an unreached corner of Asia or a medical mission to an impoverished village in Mexico. We developed knowledge and skills that encourage lifelong learning; we learned about and appreciated cultures other than our own; and we discovered and responded to the needs of the world both locally and globally. My trip to Costa Rica was an experience that has deeply impacted me and is one I will never forget.